Have the seeds of Trump's eventual demise now been planted? 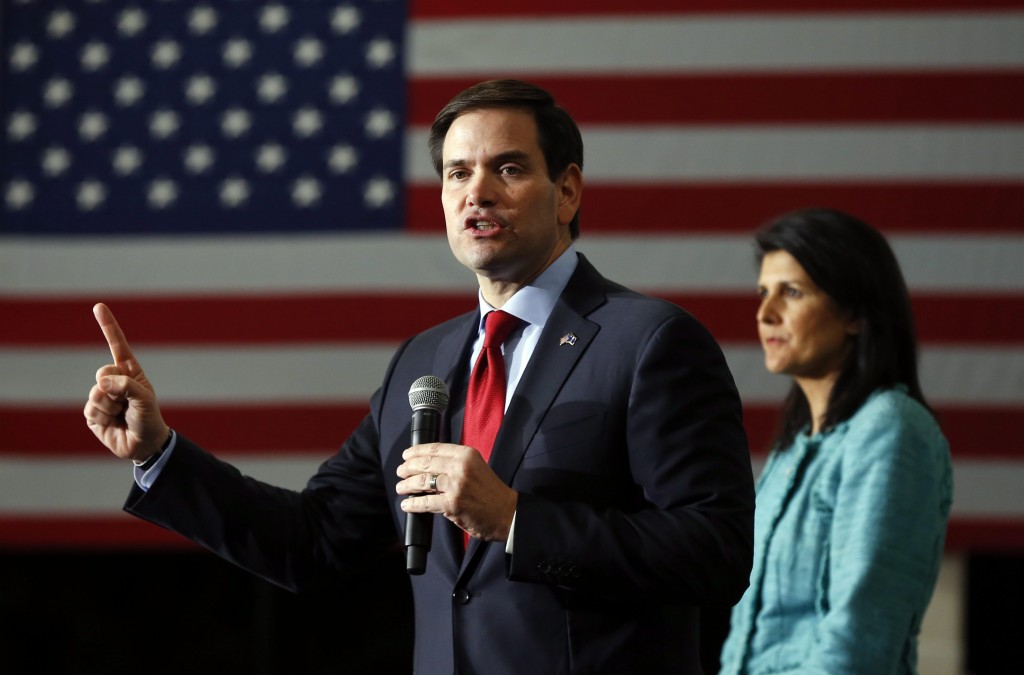 COLUMBIA, S.C., United States – Donald Trump haters within the Republican party believe the seeds of his eventual demise have just been planted in the soil of his latest triumph.

The South Carolina primary gave him a big win over the weekend but it might also have sprouted an alternative candidacy capable of uniting the party’s anti-Trump forces: the wealthy, the ideological conservatives, the college grads, and those voters who tell exit pollsters they’re desperate to beat Democrats.

That explains why someone who’s supposed to remain neutral in the primaries because of her position within the Republican grassroots structure was at a Marco Rubio rally, wearing a button with his face on it.

”We are going to fight,” she said.

”We need to stop that man.”

That man is Trump. Basic historical precedent dictates he should be all but guaranteed now to be the Republican nominee. He’s won the last two states and every other person who’s won New Hampshire and South Carolina has been nominated in the modern primary era, within both major parties.

But this local organizer said forces within her party are determined to stop Trump: either on Super Tuesday; or in the three-dozen states that follow; or on the convention floor in the first multi-ballot scrap in generations.

A common topic of discussion at Republican rallies last week was whether people would even support Trump in the general election, should he emerge as the nominee.

Some said yes. Some said no. At Saturday’s Rubio rally, Bob Barnwell said he’d have to pray over how to deal with a Trump nomination. A friend interrupted to warn him: ”I’ll kill you (if you don’t vote).”

The mood picked up in the room – first as it became clear Rubio had zoomed into second place, breaking away from the three-way logjam involving more mainstream alternatives to Trump and Sen. Ted Cruz.

A roar then erupted as Bush’s image flickered across the TV screens, and he delivered six magic words: ”Tonight I am suspending my campaign.”

It was suddenly like a victory party. First-term Florida senator, first-generation Cuban-American Marco Rubio was suddenly winning a non-existent primary: the race to become Establishment Favourite No. 1.

Evidence of his growing status within the party was right on stage.

South Carolina’s governor was there with him. So were two of the state’s three most famous lawmakers in Washington. And there’s every reason to believe the third lawmaker, Bush supporter Lindsey Graham, is closely aligned enough with Rubio as a pro-military hawk to join the parade too.

A former county chairman, Jim Jerow, said that after a crazy primary season Republicans might finally be settling on the one candidate the other party fears most. Rubio consistently out-polls his rivals against the Democrats: ”We need to focus,” Jerow said.

Javier Cespedes said Rubio would save the party – from a frontrunner who’d be a ”disaster.” Cespedes predicted donations and supporters would start flying Rubio’s way.

He offered some quick math on how Trump goes down.

”Those automatically are going to be Marco Rubio votes. They have no other candidate to go to.”

Trump would beg to differ.

Continuing his tradition of being the presidential candidate who discusses polling more than any other in memory, Trump delved into his own calculus during his victory speech.

”A number of the pundits said, ‘Well, if a couple of the other candidates dropped out if you add their scores together it’s going to equal Trump,’“ said Trump.

”But these geniuses – they’re geniuses – they don’t understand that as people drop out I’m going to get a lot of those votes also. You don’t just add them together. So I think we’re going to do very, very well.”

To a certain extent, both sides are.

Rubio does best among anyone in the field at gaining new supporters, according to polls asking Republicans for their hypothetical second choice. In a hypothetical two- or three-person poll, he rivals or even beats Trump.

But there’s an asterisk to that.

Trump has a point _ polls suggest he would indeed win some votes from supporters of other parties, albeit fewer. Rubio has also failed before at converting momentum into progress: after a strong showing in Iowa he crashed and burned in New Hampshire.

Cespedes observed how swiftly things can change. In an interview at the crowded Rubio rally, he expressed hope party officials would start pressuring other candidates to quit.

A moment later, Bush announced he was gone.