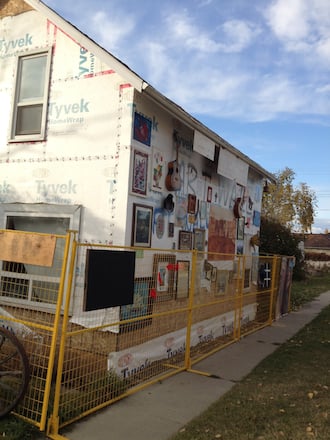 One of the homes in High River, Atla. that was deemed not fit for habitation has been turned into a found-art gallery. (Photo by Emily Senger)

When I was home in June, it didn’t look like home. I grew up in High River, Alberta, a town of 13,000 once best known as the birthplace of Joe Clark. Now it’s better known as the town that flooded.

The Highwood River overflowed on June 20 during the worst flooding in the province’s history. It flooded most of High River and prompted the government to place the town under mandatory evacuation. (Parts of Calgary flooded the next day.) During the days that followed, RCMP placed checkpoints at every road into High River. In the week after the flood, citizens were kept out, though journalists received guided tours under police or military escort. Families, my parents included, were forced to wait and wonder. It was a time of intense emotion, which I wrote about for Maclean’s in June.

Last week, I returned to High River, a visit that was both bleak and hopeful. I spoke to residents who were still displaced and wrote about their struggles for the magazine.

I know at least one reader will say the story paints too bleak a picture. While my magazine article tells the stories of four families that are seeing very real challenges, there are also signs of hope for the town of 13,000. Other media reports have focused on Evelyn’s Memory Lane Cafe, a downtown lunch spot that sustained remarkably little damage and re-opened in July. I ate at Evelyn’s last week, and I can attest that the homemade soup and fresh-baked bread is as good as ever. Residents continue to gather at the cafe, just as they did before. It’s a hopeful spot in the downtown core, as neighbour businesses remain shuttered.

While there are for-lease signs in some commercial buildings, other businesses have not given up yet. Shop owners have rented space in a temporary business park while crews drywall and finish flooring in their former locations. The Co-Op and Sobeys grocery stores are open. People are out walking their dogs. Kids play in the same schoolyard I played in as a child (at least in the half that has been cleaned up and deemed safe). Southeast of downtown, in a hard-hit residential area, a home deemed not-fit-for habitation has been turned into a communal canvas where residents have nailed found art. Submissions on “the gallery house” include chipped pottery from the studio up the street, a mirror reading “You are the work of art,” a boot full of river mud, and a framed print of a glass of wine with the words “half full” written on it. 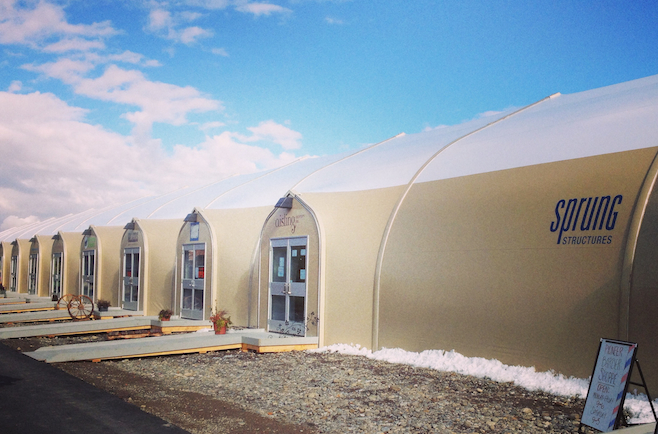 Even the little things we take for granted— flushing toilets, safe water and roads clear of debris—are fairly remarkable, given that when I left four months ago, some neighbourhoods were sitting in a stagnant lake of water. The cleanup is largely the work of Tervita, a private company hired by the provincial government in a sole-source $45-million contract. While Tervita’s record on remediating private residences remains up for debate, it has made impressive progress on the municipal infrastructure. Soon, the provincial government will remove an unused train bridge across the Highwood River. During this most recent flood, and other less severe floods before it, the bridge acted as a choke point, trapping debris and causing the river to back up into downtown.

And my parents are in good shape, at least compared to many families. Their home, the childhood house I grew up in, was categorized as “red”—the worst level of damage. The river ran through the finished basement, right up to the ceiling, which my parents found on the basement floor, along with sewage and mud, when they returned home. There was also main-floor damage to their office and dining room. My parents ripped out dry wall and insulation and cleaned things so that they could move back in. My step-father and mom have done most of the work themselves, with help from family and friends. In near-constant motion since June, my step-dad has gone down two belt notches. It’s been hard work, but they continue to rebuild. What else is there to do?

My parents include themselves among the “lucky ones.” They received some money from their insurance provider (many did not, as overland flooding is not covered by homeowners insurance in Canada) and dipped into savings to cover some costs. Many residents don’t have savings. Those waiting for government assistance are, for the most part, still waiting And then there are the homes that aren’t even worth saving. There are 14 houses on the cul-de-sac where I grew up. At least four will be torn down. For now they stand, uninhabited and unsafe to enter. So, while there is hope and good-news stories, there are just as many reminders of what has been lost.