Politics Insider for May 10: Shaw stocks plummet; how Canada secretly got Justin Trudeau to Ukraine; feminists call for review of RCMP's 'toxic culture' 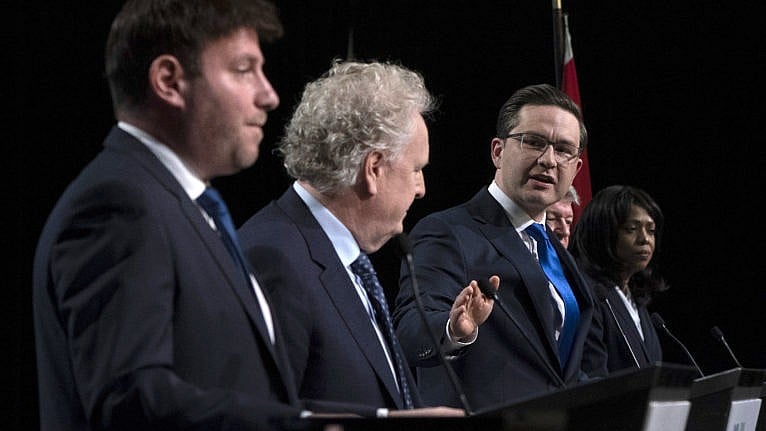 Activists, organizers and pollsters tell Abbas Rana in the Hill Times that the U.S. Supreme Court’s upcoming decision on Roe v. Wade will “quite likely” define the Conservative leadership race.

Campaign Life Coalition, a prominent pro-life organization, has recommended to thousands of its supporters to vote for Lewis and not to vote for Poilievre, former Quebec premier Jean Charest, Brampton Mayor Patrick Brown, or Conservative MP Scott Aitchison. The organization is still reviewing the views of Ontario PC MPP Roman Baber and has not made a final decision. In a statement last week, Baber said that he would allow MPs to bring forward legislation and would not force caucus members to toe the party line on issues of conscience. “In a lopsided manner, it will give energy to Leslyn Lewis amongst the base,” said Jack Fonseca, a spokesperson for the Campaign Life Coalition. “If they have social Conservative values, they will be more mindful of voting for the only social conservative candidate.”

Marginal: In the Star, Chantal Hebert points out that a victory for abortion opponents in the United States may hinder, rather than help, their Canadian comrades.

If anything, the overturning in the U.S. of abortion rights is more likely to have the opposite effect, pushing the rearguard battle against the right to abortion and those who lead it in Canada further in the political margins. For if the Canadian anti-abortion movement has accomplished anything over 34 years since the Supreme Court’s Morgentaler decision, it has been to solidify the political consensus against its cause.

Wedge: Also in the Star, Supriya Dwivedi writes that, while a change in the legal status of abortion in Canada looks unlikely, it is fair to note the Conservatives’ political reliance on abortion opponents.

It is also an undeniable fact that out of the two parties ever in contention to form government in this country, one of them actively courts the anti-choice vote. Yet for some reason to acknowledge this point leads to accusations of playing wedge politics — not just from Conservatives, but also many legacy political reporters and pundits alike.

To the Rock: A flight carrying 166 Ukrainian refugees landed in St. John’s on Monday, CBC reports. The flight was chartered by the province’s immigration department, which established a satellite office in Warsaw.

Shares fall: The stock price of Shaw Communications fell more than seven per cent on Monday after the Competition Bureau notified Rogers on Friday that it plans to oppose the $26-billion acquisition of Shaw, the Globe reports.

Toxic: An alliance of feminist organizations is calling for the federal government to establish an external review of the RCMP to address its treatment of women, the Globe reports. The Canadian Feminist Alliance for International Action says the force has a “toxic culture” when it comes to misogyny, racism and violence against women.

Tight-lipped: Opposition MPs chided the Mounties for being tight-lipped during hearings on on facial recognition technology, CBC reports.

More carbon: Ontario electricity-generation emissions will rise thanks to the Doug Ford government’s decisions on power generation, the Star reports.

Extra money: Ontario PC MPP Lisa MacLeod, received an “MPP’s allowance” from her Progressive Conservative riding association while she was earning a six-figure salary as a cabinet minister, the Citizen reports.

Over three years, between 2018 and 2020, that allowance totalled $44,000. The information, contained in the Nepean PC riding association’s financial statements, was released by the provincial NDP party Monday.

Affordability: Voters may see MacLeod’s extra pay in the context of concern over pocket book issues. Every publicly available Ontario election poll shows the number one concern of voters is the rising cost of living, CBC reports.

From a stall: Liberal MP Shafqat Ali has apologized after participating in House of Commons proceedings virtually from a washroom stall on Friday, CTV reports.

Contempt: Former Alberta justice minister Jonathan Denis has failed in a bid to overturn his contempt of court conviction, the Edmonton Journal reports. Denis, the PC justice minister from 2012 to 2015, was found guilty last month of trying to intimidate Dr. Anny Sauvageau by sending a letter to her lawyer during the trial of her $7.5 million wrongful dismissal lawsuit.

Quotas? Omar Alghabra said several times on Monday that CN must set an example by ensuring that francophones are represented on its board of directors, but seems reluctant to impose quotas, La Presse reports (translation).

Stagnant: Douglas Todd, in the Vancouver Sun, has a gloomy story on how Canadian wages appear to be stuck.

It’s the system: Beverley McLachlin and Taylor Owen have a thoughtful column on options for regulating platforms without curbing freedom of expression.