Scott Moe, the province's unassuming premier, sets out to fulfill the conservative dream to vanquishing Trudeau's carbon-pricing plan. But what if he fails? 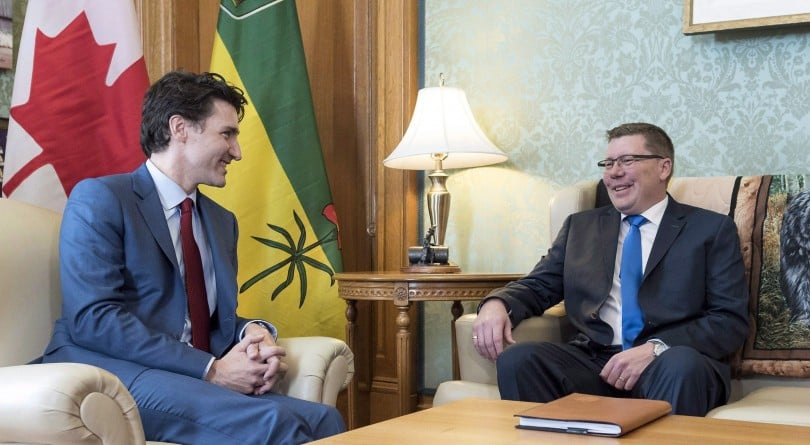 Long before Doug Ford gets a chance as premier to wage his scrap-the-tax war against Ontario’s cap-and-trade system, and Justin Trudeau’s carbon price program; before Alberta’s Jason Kenney can win the right to combat evil Ottawa’s “tax on everything” diktat, a bespectacled, low-talking man in Regina by the name of Scott Moe will have his say. If any provincial figure can slay Trudeau’s carbon tax system, it might be the Saskatchewanian you probably haven’t heard of, not the better-known and louder conservative politicians from bigger provinces. Moe is helped by the fact that, unlike Kenney and Ford, he already holds power. He became Brad Wall’s subdued replacement as Saskatchewan Party leader and premier in January, after the charismatic Wall decided it was time to grow a beard and call it a career. Being premier, rather than merely leading in the polls ahead of an election, means a politician gets to do all sorts of powerful-sounding things, like send a reference question to his province’s highest court in hopes of declaring disagreeable federal legislation unconstitutional. And so Moe did on Wednesday, formally challenging the federal Liberals’ bid to impose a $10-per-tonne carbon price next year on any province without its own carbon tax or cap-and-trade scheme.

He has been as rhetorically steadfast against the carbon tax as Wall, Ford or Kenney. And while generally not as flashy as any of them, the new premier did lob a “just watch me” at the second Prime Minister Trudeau in his victory speech earlier this year. Moe has now outsourced the argumentation to a provincial legal team. Even if this is the longshot most legal scholars say it is, court offers an arena where conservatives get to find out whether their political lines about Ottawa’s meddling actually have merit.

If Ford wins the election in June, he might have a few weeks before the deadline for Ontario to seek intervenor status on Saskatchewan’s carbon tax legal reference. Kenney, who must wait until spring for the Alberta election against NDP Premier Rachel Notley, can only provide moral support to Moe’s challenge. But should the Saskatchewan Court of Appeal reject the province’s arguments, a Premier Kenney may, depending on timing, still have a chance to get on board: Moe tells Maclean’s he’s willing to take the case to the Supreme Court of Canada.

Win or lose, this will be the benchmark case whose decision Moe, Kenney or Ford would have to accept, says Ted Morton, a constitutional scholar and executive-in-residence with the University of Calgary School of Public Policy.

The reference question, he says, is their “first and best line of defence.” “It’s not impossible to imagine subsequent attempts to frustrate implementation of the tax with further legal challenges, similar to what B.C. is doing with the Kinder Morgan pipeline. But I think the courts would get pretty impatient with that type of thing if the Supreme Court has already made a ruling on the key jurisdictional issue,” says Morton, a former Alberta energy minster.

One would hope that, as Kenney and Moe urge B.C. Premier John Horgan to respect the generally understood authority of the federal government to regulate interprovincial projects like pipelines, they would follow suit if courts determine the carbon tax is Ottawa’s to implement. But that’s a few hypothetical steps too many down the road (Meanwhile, the B.C. government is about to drop a judicial reference asking who can regulate bitumen flow, which means Trudeau’s government will face constitutional questions on the issues he often claims go hand-in-hand: energy and the environment).

Saskatchewan’s reference question is a broad, standard and straightforward one: would the Greenhouse Gas Pollution Pricing Act introduced in Parliament in March “be unconstitutional in whole or in part” if enacted? In an interview with Maclean’s, Moe says his government is confident  it will succeed, and can instead stick with its climate change plan that emphasizes sequestering emissions from coal-fired power plants and energy operations, “so that we can move the carbon content in our atmosphere. That’s the environmental goal here. The environmental goal is not to move jobs or industries to other areas of the world that have less cost of doing business.”

READ MORE: Why Saskatchewan is still holding out on the feds’ climate plan

For a while last year, when Wall was fighting this one for Saskatchewan, it appeared the province with Canada’s highest per-capita carbon emissions wouldn’t be standing alone. Manitoba and Brian Pallister, its Tory premier, were also opposed. But instead of a reference, Manitoba sought a legal opinion, and University of Manitoba law professor Bryan Schwartz was so downbeat about the province’s prospects that Pallister conceded his province needed its own provincial carbon price, not a court battle to resist a federally imposed tax: “If we just say ‘no,’ we get Trudeau. If we go to court, we lose.”

Schwartz informed Manitoba last fall that the Supreme Court would likely uphold Ottawa’s taxation power, and that enacting a federal carbon levy in a province only as a “backstop” for policy laggards should be accepted as part of “cooperative federalism.”

The weight of Canadian legal and scholarly opinion agrees that there is federal jurisdiction to impose carbon levies, says Eric Adams, University of Alberta associate professor of law. “There’s no line in the constitution that you point to with the words ‘carbon tax,’ and in some ways this is a new ballgame for the various governments. In part, that small margin of uncertainty is where provincial opponents have been hanging their hats for some time,” Adams says.

Schwartz did, however, suggest one “credible (but untested) argument” a province could mount—that if their own plans reduced emissions as effectively as a federally preferred pricing scheme, Ottawa would be “acting inconsistently with the principle that all provinces have equal authority to legislate within areas of provincial jurisdiction.”

The use of such backstops is not new, says Natalie Chalifour, co-director of the Centre for Environmental Law and Global Sustainability at University of Ottawa. She notes that the federal Species at Risk Act, includes a similar measure if provinces or territories are not effectively protecting species. “Ottawa choose this route in order to give the provinces maximum flexibility to choose the carbon pricing system that is best suited to them, rather than dictating one approach,” she says.

Regardless of the legal odds, this does put Saskatchewan’s premier at the forefront of attempts to thwart Trudeau’s national carbon price standards. But the judicial battle may still be winding its way through courts by the time another Saskatchewan conservative, Opposition Leader Andrew Scheer, gets his chance in next fall’s federal election to test the merits of a carbon tax, and overturn it, in the court of public opinion.