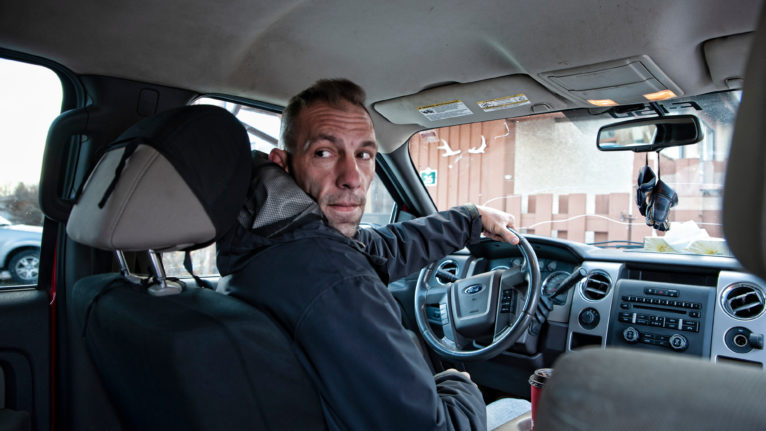 Steve Balog, at his home in Saskatoon, recently learned that Premiere Scott Moe was the person responsible for killing his mother in a car accident in 1997 after twice being charged for DUI’s previously (Photograph by Nayan Sthankiya)

With COVID-19 cases rising across Saskatchewan over the summer, Steven Balog followed Premier Scott Moe for updates on Facebook. The politician became a regular fixture in the 42-year-old journeyman scaffold erector’s feed. Balog followed along as Moe posted daily stats on active cases, news about the province’s plans for reopening schools and good-news stories about local entrepreneurs and hockey players.

A few months later, in the middle of a provincial election campaign, a friend sent Balog a link to an old newspaper story about a fatal car crash involving Moe in 1997, asking if the woman who died was his mother. Balog was stunned. The man he had been looking to for information and leadership in the pandemic, whose face he saw regularly among those of his family and friends on Facebook, was the same man he had been looking for since he was in that crash near Shellbrook, Sask., 45 km west of Prince Albert, at the age of 18.

Moe has said he wasn’t drinking before the collision that killed 39-year-old Jo-Anne Balog, but he was convicted of impaired driving in a different crash in 1992 and accused again of the offence in 1994, a charge prosecutors later dropped. And Moe has a lot of company: fully 11 candidates for the two major parties in October’s election, the Saskatchewan Party and the NDP, had impaired driving convictions. It’s a symptom of a larger problem, with police investigating more impaired driving incidents per capita in Saskatchewan than any other province by far, thanks to what some say is an ingrained culture of getting drunk and driving home on rural roads.

Balog says police refused to tell him who the other driver was at the time, so after grieving the loss, he went on with his life and tried not to think about it. Now that he knows that man went on to become the premier—leading a party full of so many others convicted of impaired driving—he’s outraged. “We need to raise our standards. We need to change as a society. That’s unacceptable,” Balog says. “These should not be the people we put into power to look after all of us.”

It was a startling takeaway from an otherwise uneventful election, which Moe’s party won despite the ugly headlines with a massive, fourth-consecutive majority. Every year for the past decade, Saskatchewan has had the country’s worst rate of drinking and driving, according to data from Statistics Canada, with only the territories outpacing it in incidents per capita reported by police. In 2018, the most recent year with data available, police reported 783 impaired driving incidents per 100,000* people, with P.E.I. posting the second highest rate at 525 incidents per 100,000*.

Those numbers leave a lot of room for improvement, but they’re on a downward trend. Saskatchewan’s 2018 impaired driving rate was 39 per cent lower than it was in 1998, with only Ontario posting a bigger drop over the past 10 years. And 2019 saw the fewest impaired driving fatalities in Saskatchewan’s history, with 21 compared to an annual average of 54 from 2009 to 2018, according to statistics from Saskatchewan Government Insurance (SGI).

Andrew Murie, chief executive of Mothers Against Drunk Driving Canada, gives the Saskatchewan Party a lot of credit for 2019’s record-low fatality figures. While it may seem odd for the head of an anti-impaired driving advocacy group to praise a party with so many candidates who have been convicted of the offence, Murie says the party started taking action in 2017 that is reflected in the 2019 numbers.

The 2016 impaired-driving arrest of Don McMorris, who was deputy premier at the time, was a turning point for the province, Murie says. After decades of considering Saskatchewan to be, in his words, a “black hole” for impaired-driving outreach, the Saskatchewan Party implemented stricter penalties, more police enforcement and a public awareness campaign that finally started changing the culture.

“I have to say, I was totally impressed,” Murie says. “It’s very seldom that governments follow through fully on their commitments. And they did.”

In a statement, the Saskatchewan Party’s Joe Hargrave, who as the minister responsible for SGI played a major role in acting on those commitments, said the party plans to continue that work now that it has been re-elected. “While there were still 21 people who lost their lives [in 2019], which is still too many, this is a significant decrease and we feel our message is getting through,” Hargrave, the Sask Party’s candidate in Prince Albert Carlton, said.

Attitudes about impaired driving may be changing in Saskatchewan, but acceptance of it runs deep. As a teenager, Balog moved from Alberta to Sedley, a small town south of Regina. He says he was shocked by how common it was for people to go to farm parties and drive home drunk on back roads.

That normalization continues, Balog says. “Every small town in Saskatchewan basically has one or two things: a gas station and a hotel bar. So your main activity is to hang out at the bar. The culture has been like that and slowly changing over the years, but it’s been very slow.”

Balog is less forgiving than Murie about the Saskatchewan Party’s awakening on impaired driving. He didn’t vote in the election, saying he couldn’t imagine voting for either party, given the number of candidates with convictions. He still follows Moe on Facebook, and hopes that one day the premier will sit down with him, look him in the eye and have a frank conversation about the collision. Until then, he’s stuck seeing the other driver in the crash that killed his mother seemingly everywhere. “To think I sat there for three months and listened to a man not knowing what he had done to me,” Balog says. “It’s pretty incredible.”