Sorry. Not sorry. What is Kathleen Wynne really saying?

The Ontario premier's new ad makes a powerful statement. But will it work? We asked a group of political and advertising experts to break it down. 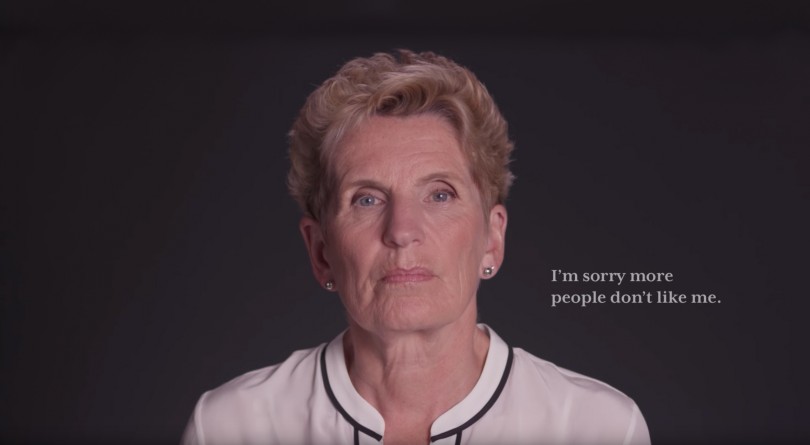 At the same moment that Liberal Leader Kathleen Wynne was facing off against Progressive Conservative Leader Doug Ford and NDP Leader Andrea Horwath in the final Ontario leaders’ debate on Sunday evening, her campaign released an arresting video.

The 30-second spot focuses in tight on Wynne’s face, and nothing else, as she raises her gaze to meet the camera. Her face is utterly still as she declares in a voiceover, “I’m sorry more people don’t like me.”

But then, she flips it around: What she is not sorry for is keeping business taxes low, covering tuition for low-income students and a host of other initiatives she counts as the successes of her six years as premier.

As her disembodied voice continues to make the case that her government has made life better in Ontario, Wynne’s face shifts from defiant—or possibly pained?—to a slowly dawning grin of pride.

The ad got clever reinforcement because Wynne referenced the same “Sorry. Not sorry,” framing directly in her debate remarks. And sure enough, the unusual spot—which in its unflinching visual construction looks more like an attack ad—grabbed plenty of attention online.

Maclean’s asked a group of advertising and political experts to help deconstruct the ad, what it’s trying to accomplish and the risks of a strategy like this.

It’s trying to say, “Look, I hear you.” But also, “Now hear this.” When Wynne looks you in the eye and says, “I’m sorry you don’t like me” she is demonstrating she knows what Ontarians are feeling about her. It’s disarming. Viewers with crossed arms and stiff backs might lean in, a little. Smart opening move.

The ad then turns this mea culpa on its ear, without diminishing its disruptive power, by saying the words “But I’m not sorry that…” followed by a series of meaningful accomplishments. Smart next move.

When smart marketers need to shift negative perceptions about their brand, it’s always wise to get the consumer on your side by acknowledging that they have a problem. Saying that problem doesn’t exist is akin to picking a fight with them—a fight you will lose.

Once you’ve acknowledged their concern, you can either set out to say how you will change, which is what Wells Fargo, Starbucks, Facebook and ABC and Disney are doing. Or, you can hope to re-balance the discussion by reminding your audience of the things you have done in the past that they value. Neither approach is foolproof.

This ad is trying to teach Ontarians that we should elect a leader based on what they can get done rather than what they can promise to get done. It’s reminding people that elections shouldn’t be popularity contests.

WATCH: The one thing Kathleen Wynne should be sorry for

If Ontarians find that being Wynne-splained and lectured creates emotional distance, this ad attempts to bridge that distance. This Wynne is close up and personal—confessionally so.

Will the candour of the opening line, the accomplishments she shares and the raw simplicity of the ad shift entrenched thinkers? Not one bit. They don’t want to be persuaded. Will it move a sufficient numbers of the undeclared and fence-sitters to give Wynne and the Liberals another chance? Unlikely.

Amanda Galbraith, principle at Navigator and strategist to former Prime Minister Stephen Harper, among others

The ad is a bit jarring. It’s different. I was talking to my sister yesterday—who’s not political—and she said it was all over her Facebook with people sharing it.

For hardcore Liberals who were disaffected or frustrated or feeling totally beaten down with the way the campaign has gone, it gives them permission to be proud of the record again, in an unapologetic way. I don’t think it will deliver the campaign to them, by any stretch of the imagination, but my instinct is it will stop the bleeding.

The nutshell message is “Pay attention to me,” which is really interesting for a premier, because usually they walk in, they make a statement, they’re used to having people pay attention. There’s a saying: “You know the marriage is over when you just stop fighting.” I think it’s to the point where voters have totally tuned the Liberals out.

It honestly answers the question, which is her likability factor. Anyone as a human being, having to hear someone say, ‘I know I’m not very well liked,’ you feel for that person. So there’s a sympathy factor there.

And by the time you’re paying attention, you’re looking at the record and thinking, “Okay, well that’s a good thing they did and that’s not a bad thing that they did.” So I think it’s a way of sneakily getting in the policy stuff in a jarring, different kind of way. It definitely cuts through the noise right now.

Yes, it’s about this election, yes it’s about saving seats, and the viability of the Liberal party, but it’s also the premier’s legacy, too. She wants to be proud of what’s she’s accomplished, and this is arguably the last piece they put out in the campaign to defend it.

At this point in the campaign, typically you say, okay, if the candidate’s that unpopular, we should just send her off on a tour of Northern Ontario where no one can find her, and we’ll just make sure that people aren’t affiliated. This is basically going in the exact opposite direction. I think it also speaks to the kind of person the premier is, which is she wants to tackle it herself.

This is an angry ad written (or certainly approved) by an angry leader. And who can blame her? The level of rage directed at Wynne right now is unfathomable.

But then, I’m not even sure this ad is even intended to get people to vote for her. It feels more like a legacy play—like she and the Liberals want their accomplishments on the public record before Ford strips them all away. The ad seems to be trying, amidst the insanity of this election campaign, to set the record straight.

The visual style is as defiant as the #SorryNotSorry hashtag. No roaring crowds. No babies being kissed. Just Kathleen Wynne staring down the barrel of the camera/gun. Political advertising is usually either about selling hope or instilling fear. This is neither. This is unrepentant resignation. The captain, standing stoically on the bridge, going down with her ship.

Were the Liberals even close at this stage of the race, I think this ad would be seen as very risky. #SorryNotSorry is not from the “how to get elected” playbook. But at this point, Wynne has nothing to lose. It’s a Hail Mary with no time left on the clock. And while Hail Marys rarely work, it’s worth a shot.

Whenever you’re communicating, you’re trying to cut through the clutter, you’re trying to focus. If you were to talk through a room and it’s on television, you would notice it because it’s different, and even if you only caught part of it, you’d get the message.

In many ways it’s like saying the party leader is the CEO of a political party, so it’s almost like a CEO taking responsibility for something. It’s noticeably, squarely about that one individual as representing the entire party. The ad might have had more effect if it had come out earlier. Later on, when you’re closer to an election, people are closer to having made up their minds.

There’s still a level of negativity. When you’re saying ‘not sorry,’ ‘not’ in itself is a negative and what I think you’d want to be doing is conveying a positive. I would argue a lighter colour scheme would have been better. You want to be able to create a positive message when you’re the one that’s talking about your own candidate.

When people are focusing on an individual—[like] the Stéphane Dion ads the Conservatives were using around 2008—sometimes leaders are the focus by opponents. What’s interesting here is how the leader is so squarely the focus for the proponent, for the party itself.

At a very high level, if this is the message they’re trying to get across, they’re doing a good job at getting it across. The next question is, is it the right message? If anger is indeed what a lot of people are feeling…does this respond to anger? Does this diffuse that emotion?