Stephen Harper on the legality of bombing Syria: LOL

Is it legal to launch airstrikes against targets in Syria? Funny you should ask 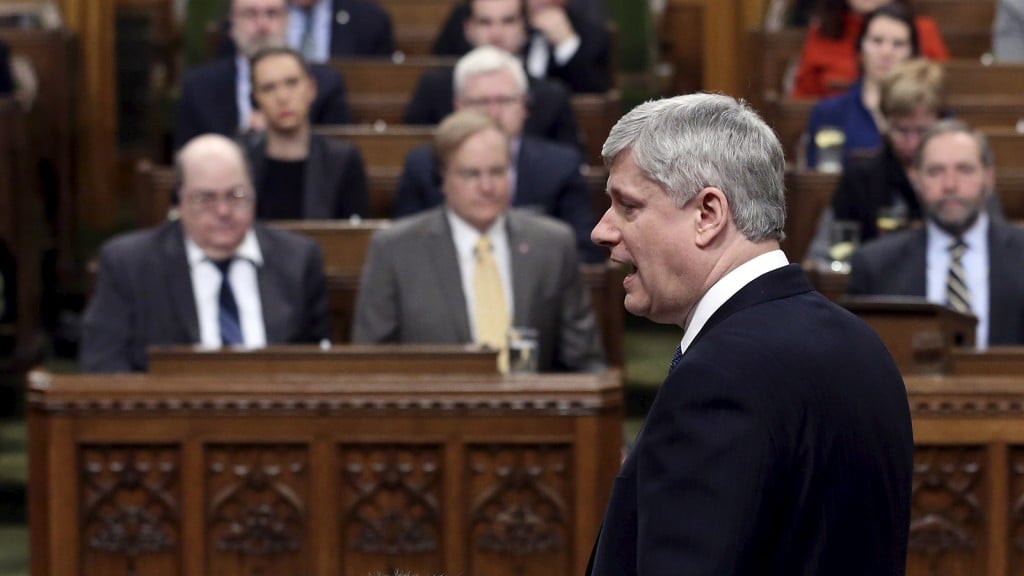 It fell to Rob Nicholson, the minister of foreign affairs, to officially deliver the punchline into the official record.

“We have indicated the government of Iraq has the collective right to self-defence under Article 51 of the United Nations,” he said. “It has officially requested international help and so we will comply with that. We will work on the same basis as our American allies are doing and report that to the United Nations.”

Perhaps that’s a bit high-brow, but I assure you it’s really quite hilarious once you understand the setup.

In his way, Thomas Mulcair has sought to pester the government on the details of this country’s war on ISIS. And the NDP leader’s specific concern yesterday was the legality of the government’s chosen intervention. What with Syria being a sovereign country that has not attacked this country, there is some reason to debate the basis on which we might bomb it. Mulcair thus sought to parse the government’s stated reasoning and with his third query he turned to Article 51 of the charter of the United Nations.

The Prime Minister first repeated his standard assurance about the legality of this country’s intervention. “Mr. Speaker,” he said, “the government is pursuing this action on exactly the same legal basis as its allies.”

But here he moved to dismiss the NDP’s question as laughable.

The Conservatives laughed and cheered their man’s apparent wit. But Mulcair stood and decried the depths to which this place had just then sunk—”extraordinary: living in a Canada where that sort of idiocy passes for argument in the House of Parliament”—and the rest was all righteous shouting and strident indignation.

Sometime thereafter Bernard Trottier, the parliamentary secretary to the minister of foreign affairs, would be sent out to look into a CBC camera—go to the 3:10 mark of this video—and defend the government’s general position. And in doing so he would state straightforwardly that the government would not be sending a letter to the United Nations and nor was any such letter required.

Here then is the joke.

At noon yesterday, you see, Defence Minister Jason Kenney had stood in the foyer outside the House and invoked Article 51 as justifying Canadian intervention. And it is Article 51 that specifies that “Measures taken by Members in the exercise of this right of self-defence shall be immediately reported to the Security Council.” (And it is also true that the American administration did write to to the United Nations last fall to detail its intent.)

Indeed, by 5:32pm yesterday Trottier had apparently been advised of the punchline.

“To clarify,” he tweeted at the CBC show on which he had been speaking, “we will proceed on same basis as Obama administration, incl. notifying UN, as req’d by Art. 51, which we will do.”

With the remaining seven characters, he might’ve added LOL. Or perhaps he could have made room for a ¯\_(ツ)_/¯.

As the nation moves deeper and deeper into war, the jokes just keep on coming.

Several months ago now, it was Justin Trudeau who attempted to make a phallic joke involving this country’s fleet of fighter jets. The Prime Minister’s Office thus lamented that the Liberal leader had made light of a serious situation, while cabinet ministers were moved to express their own individual disappointment. “Is this how Prime Minister Justin Trudeau would conduct himself in discussing use of air power at a NATO Summit?” Jason Kenney wondered. If perhaps not his worst moment—his earlier hockey joke about Vladimir Putin was more of a clunker—it was surely not Trudeau’s finest.

Some months after that, Rob Nicholson, himself having accused Trudeau of “poor judgment” in attempting to make funny, stood in the House and tried his own hand at comedy—mocking an opposition complaint with a quip that unfortunately trampled all over a distinction the Prime Minister had insisted on earlier. For the offence of believing too much in his own wit, Nicholson was made to squirm and ramble around the contradiction at a committee hearing. Perhaps now that Jason Kenney is defence minister, Mr. Nicholson is kept away from NATO meetings.

To jest about the very notion of international law in the current context is perhaps to, as the PMO might put it, make light of a serious situation. To do so with apparent disregard for an international requirement that you will later have to acknowledge as something you will honour is to perform a pratfall facefirst into a banana cream pie. As comic relief, one is tempted to thank the government for its efforts at lifting the mood. As a serious matter, one is fascinated to know what happened here. Was the government not aware of the need to notify the United Nations? Or did someone forget to brief the Prime Minister about that fact? Perhaps the Prime Minister merely lost patience with the NDP leader, but then why did the parliamentary secretary also dismiss Mulcair’s question?

Had Trudeau just spectacularly tripped over a joke about the legality of war, we’d of course be in the midst of another round of national debate about the Liberal leader’s seriousness. And that debate is not entirely unwarranted. As a politician who periodically says things he shouldn’t and doesn’t always offer satisfactory explanations he has perhaps only so far proved himself qualified to be a mere cabinet minister.

Whatever the tone or content of the Conservative side’s attacks on Trudeau, there is some merit in the basic frame: Is this man serious enough to lead a government? Indeed, that is a useful frame for taking in the entirety of this scene. And it would surely be unfair to hold Trudeau to a standard of seriousness that we do not apply to every other of these actors. In fact, seriousness, not to be confused with humourlessness, is perhaps what our approach to politics most lacks.

In the current situation, there are serious questions to be asked about the seriousness of the NDP and Liberal approaches to this conflict—can ISIS be sufficiently subdued without bombs?—and serious issues for the government to answer about its serious commitment to war. On this and basically every other issue put before them, all 308 members might regularly be asked to demonstrate that they are not woefully in over their heads; that Parliament is not merely a put-on.

That a prime minister would stand in the House of Commons and joke about the legality of war while wholly dismissing a question that his government would only later have to answer in the affirmative would seem, even if not wholly unusual for this place, like the sort of thing we might take seriously. Even if only to lament for the unseriousness of such a display.