Paul Wells: In his new book, the former PM offers a prescription to the conservative movement in the age of Trump—a little of this, a little of that 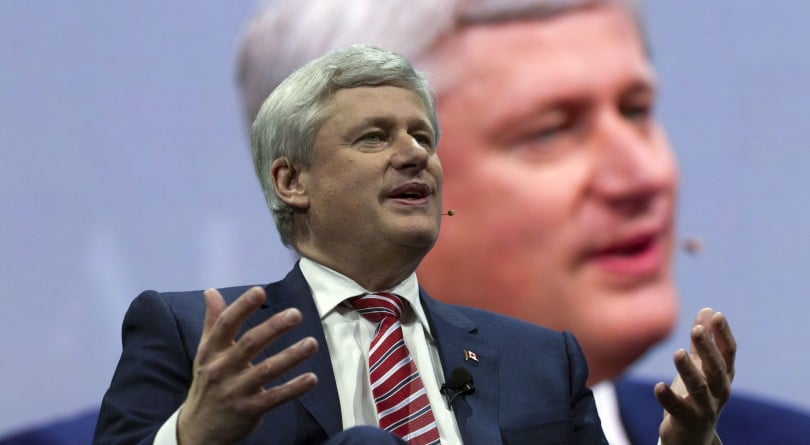 I was surprised to see Stephen Harper had written a book because I had heard, repeatedly since he lost the 2015 election, that Canada’s 22nd Prime Minister had no intention of writing a memoir. The record should speak for itself, he had told close acquaintances and former associates, who passed this intelligence on.

And indeed, Right Here Right Now: Politics and Leadership in the Age of Disruption is no traditional memoir. Early on the author describes it as “a manual for conservative statecraft in a populist age.” It is, by and large, a 171-page prescription to U.S. Republicans for renovating the Republican Party’s policy book to address the forces—economic dislocation, fears about illegal immigration—that gave rise to Donald Trump. It will come in handy, not incidentally, as a calling card for Harper’s consulting practice. This is almost all good: its context gives the book an urgency that’s usually lacking from ex-politicians’ waltzes down memory lane.

But all writing is autobiography, and even a careful student of Harper will learn a lot about the author. Barely out of school, he writes, “I came to be leery of large-scale change by edict and its inevitable, unforeseen consequences. In government, this was reflected in my (usual) incremental approach to policy change—small but constant steps.” (Here, the author of a book on Harper-as-incrementalist pauses to high-five himself.)

“My populism was, I suppose, an outgrowth of a public-school middle-class background.” (That’s Ibbitson’s book.) “It took more shape during my involvement in the Reform Party, of which I was the founding chief policy officer. That experience taught me the importance of making policy relevant to regular working families. However, it also left me leery of the chaotic decision-making structures and unreflective political reform proposals that often bedevil populist movements.”

This is gold. I’ve written whole book chapters with less source material. What stands out is (a) Harper views his Reform years as an example of what not to do as much as he views it as a positive example; (b) his conclusion was that he should implement smaller changes than Preston Manning envisioned, but to do it more smoothly; (c) he’s no better than anyone else at defining populism.

I can’t even tell for sure whether he believes populism is good or bad. This ambiguity is, itself, not necessarily good or bad; it’s just there, and you kind of have to go with it. “Present-day populism is not an all-or-nothing proposition. There are parts of it that reflect legitimate grievances with the elite consensus. There are others that should be opposed,” he writes. Fair enough. But then:

“I also know that what is happening requires understanding and adaptation, not dogma and condescension. Populists are not ignorant and misguided ‘deplorables.’ They are our family, friends, and neighbours. The populists are, by definition, the people. In a democratic system, the people are our customers. And, according to our conservative market values, the customer is always right.”

What the hell is that? If the customer is always right, then what justification can there be for opposing anything he wants? And if status as a member of “the people” disarms all criticism, then how dare any leader disagree with any people? The answer, of course, is that people are sometimes wrong, and that sticking a definite article in front of “people” doesn’t change that.

Much of the book is more persuasive. The first excerpt to appear in the newspapers featured a distinction Harper has borrowed from the British commentator David Goodhart, between “Somewheres,” people who are rooted in their communities and have a stake in their futures, and “Anywheres,” people who could live anywhere and have correspondingly less to fear from the ravages of globalization. In fact Harper uses the distinction quite narrowly. He’s not saying all Trump voters are salt of the earth and all liberals are rootless cosmopolitans. Most Trump voters in 2016 “were traditional Republican voters supporting ‘their’ candidate,” he writes. “…[T]he real key to Trump’s win was voters who do not normally support a GOP candidate but who cast their ballots specifically for Donald Trump.”

Harper is urging the Republican leadership to find ways to hold onto those swing voters that don’t depend on having a megalomaniac TV star as the party’s presidential nominee. If the Republicans fail, then Trump will be replaced by a populist of the left. And this would assuredly be worse than Trump. Why would it be worse than Trump? Harper is just sure it would be. The passages on the dangers of the left are agile slippery-slope arguments in which he ignores any meaningful distinction between, say, Tony Blair and Stalin.

READ MORE: Stephen Harper has some ideas about conservative populism

“The modern left is… intellectually adolescent,” he writes at one point. “The prototype for this kind of thinking is still Karl Marx,” he adds a paragraph later. Sure. Three paragraphs later it’s “Communist leaders… responded to every problem with… violence on an extraordinary level.” So the problem with the modern left is the Gulag? “This is the essence of the modern left. It has an allergy to our society, its underlying ideas, and core institutions.” This from a guy who is eagle-eyed on the lookout for anybody who might caricature a Trump voter. There’s a point in there somewhere, and as we come out of a season in which statues of Sir John A. Macdonald were endangered coast to coast, there’s a real conversation to be had about the statute of limitations on the sins of the father. But Harper, who delivered the Parliamentary apology for Canada’s residential-schools system but who seems uninterested in some of the direct consequences of that brave moment, is, in these passages, uninterested in nuance.

But when he isn’t writing about liberals, academics or—please don’t get him started —”the media,” Harper delivers a series of surprising and worthwhile insights. He describes the aftermath of the 2008 banking crash as “unremitting capitalism for the working class and socialist protection for the Wall Street financiers who caused the meltdown.” He amazed me by lamenting that the Reagan- and Thatcher-era policy toolbox of the 1980s—”tax cuts, spending reductions, privatization, deregulation, and freer trade—became a fixed agenda no matter what the circumstances.” He nearly pleads with mainstream Republicans to stop calling for upper-income tax cuts every year. “The supply-side benefits of further lowering top marginal tax rates are much smaller than in the 1980s when the rates were much higher. It is small wonder that those with a below-median household income… voted overwhelmingly Democratic in 2012.”

What, then, should conservative leaders do if they must not ape the Left and if the Right’s old playbook is tapped out? Well, a little of this and a little of that. Harper is against dogmatism. In a book that compliments most of the cabinet ministers who served in his governments, for instance, he nowhere mentions Maxime Bernier, and the passages on telecoms policy and supply management are a near-explicit rebuke to Bernier. When he tries to nail down a path forward for conservative leaders, however, he quickly discovers an aversion to nails.

“What does this mean for conservatives and conservatism? There are, in my view, three basic options,” he writes.

“One option is the old status quo: return with gusto to pre-Trump, Wall Street Journal, supply-side conservatism.” This porridge is too cold.

“A second option is to double down on unbridled populism.” This porridge is too hot.

“The third option is to reform conservatism to address the issues that are driving the populist upheaval. That is to say, adapt conservatism to the practical concerns, interests, and aspirations of working- and middle-class people.” This porridge is just right.

The problem with such a Goldilocks-ian middle path is that there is no formula for finding it. Harper is against formulas. “Conservatives should remain pro-market, pro-trade, pro-globalization and pro-immigration at heart. … But being pro-market does not mean that all regulations should be dismantled. … Being pro-trade does not imply that any commercial arrangement is a good one. …” And so on. “Being pro-something is not an excuse for ideological tangents. It is about getting back to pragmatic applications of our values… it is about rolling up our sleeves, knowing the details, and monitoring the impacts on people’s lives.”

OK, great, but who can serve as an example of pragmatic applications, or sleeve-rolling and detail-knowing and impact-monitoring? Why, by God, Stephen Harper can. The book is full of examples of cases where Harper had to find the Goldilocks ground between being pro-something and taking a tangent. When he went in halvesies with Barack Obama to buy much of General Motors. When he defended supply management — and also when he carved off bits of the supply-managed agriculture sector’s quotas to buy progress in trade talks. When he went into deficit, cut taxes, reformed immigration: so many cases of, frankly, easily defensible good judgment, with frankly good outcomes for the long-term health of the economy.

It happens that the fellow who so consistently made the calls Stephen Harper thinks were best, a fellow by the name of Stephen Harper, is currently accepting applications for potential clients of his consulting practice. I don’t want to overstate the book’s utility as a calling card for that purpose, because it’s a useful read, even when it’s fun to pick fights with, even if you’re not thinking of hiring Harper or his Associates. It is, deeply and richly, a product of Stephen Harper, smart and blinkered and always awesomely self-assured. I found myself missing the guy. Your mileage may vary.