From the archives: Why is the court taking a second look? And where's Parliament? 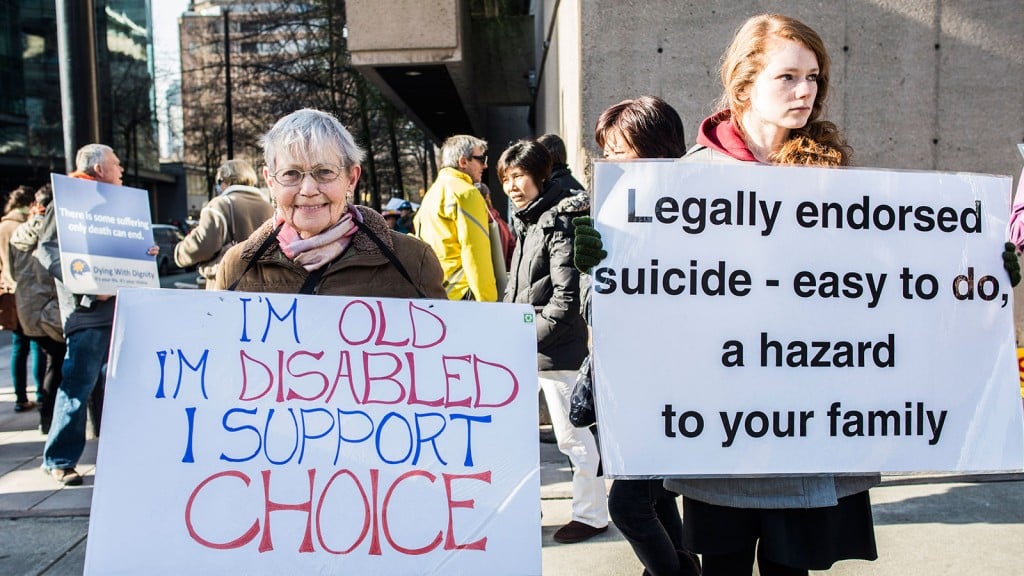 On February 6, 2015 the Supreme Court struck down Canada’s ban on doctor-assisted suicide. In the following story from October 2014, Emmett Macfarlane considered the implications of the challenge:

The Supreme Court will hear a new Charter of Rights challenge to the prohibition against assisted suicide on Wednesday, roughly 21 years after its justices upheld the law in a similar case by a narrow 5-4 vote.

The new case raises a number of interesting issues in addition to the central question of assisted suicide: Can/should the Court effectively overrule itself? Or, more specifically, if the Court determined in 1993 that a ban on physician-assisted suicide was a “reasonable limitation” of Charter rights, why is it deciding the issue again? And should the Court even be the institution to have the final say about such a values-laden, morality-based question?

Why is the Court considering assisted suicide again?

A number of important developments explain why the Court can easily distinguish this new case from the one in 1993. First, a wealth of comparative evidence from countries with regulated, legalized assisted suicide now exists and it answers a lot of questions that worried the Court two decades ago. Many of the arguments against ending the ban rely on slippery-slope reasoning, suggesting that permitting physician-assisted dying will invariably lead to the involuntary euthanasia of the ill by their families or of those lacking the mental capacity to consent. The Court’s majority at that time expressed concern about the “uncertainty” of lifting the ban, suggested Canada would be unique among Western countries if it did so, and asserted there were not adequate safeguards to prevent abuse.

It will be much more difficult to make the same assertions today. After a very thorough examination of expert-witness testimony and studies in other jurisdictions, including the Netherlands, Oregon and Belgium, the British Columbia trial court judge found that while existing safeguards are unlikely to be 100 per cent effective, there is little evidence to support the contention that vulnerable persons have been placed at risk where assisted suicide has been legalized. It’s important to note that the Supreme Court normally gives significant deference to such findings of fact at the trial level.

Second, the Court’s approach to Section 7 of the Charter—the right to life, liberty and security of the person—has evolved considerably since 1993. The Court has recognized and articulated new “principles of fundamental justice” against which violations of Section 7 are judged, specifically, laws that are overly broad or that create harms that are grossly disproportionate to the objectives of the law. The Court has applied these principles in numerous decisions, including those striking down Criminal Code provisions on prostitution last year, and overturning the federal minister of health’s attempt to shut down Vancouver’s supervised drug-injection facility in 2011. On Wednesday, the Court will deal for the first time with arguments invoking these principles as they relate to the assisted-suicide ban.

The hearing will also involve novel arguments that the Court did not consider in 1993. One of these pertains specifically to the right to life: the argument that the current law risks shortening the lives of terminally ill patients, because some may choose to end their lives earlier than they otherwise would, knowing they will be unable to obtain assistance to do so later when they are unable to do it themselves.

In short, the Court has accepted leave to hear this case on the basis of a new evidentiary record, major developments in its approach to the Charter since 1993, and new legal arguments. Further, the Court is no stranger to overturning its own decisions. One notable example is a 2007 decision recognizing that collective bargaining is protected under freedom of association, overturning its own 1987 decision where a majority of justices held the opposite view.

It is also worth noting that Chief Justice Beverley McLachlin, the only judge there in 1993 who is still on the Court, was in the minority at the time.

Is the Supreme Court the right place to settle this question?

While there are a lot of reasons to think the Supreme Court will strike down the ban on assisted suicide, another question is whether it should. Grant Huscroft, a professor of law at Western University, has argued the Court should leave the issue to Parliament. Assisted suicide involves questions of medical ethics, health policy-making and its associated uncertainty, personal morals and societal values. There are good reasons to prefer that a representative body such as Parliament have the final say on such questions.

Indeed, in interviews conducted for my book, Governing from the Bench, many of the justices who took part in the 1993 case essentially agreed with Huscroft. In addition to uniformly describing the case as one of the most difficult they faced (a couple describing personal anguish on their part), one of the justices, interviewed anonymously, stated, “I believe you’re stressing the limits of the judicial function in that case to, in effect, say that a prohibition against assisted suicide was unconstitutional . . . Is this just a legal question? What’s the input coming [from] philosophers, medical science, care-givers, social workers?” As I further note in the book, former Justice Claire L’Heureux-Dubé, who was part of the minority voting to strike down the law in 1993, has publicly stated she was relieved that the majority won and the matter was left to Parliament.

And yet, Parliament, whether under the control of Liberal or Conservative governments, has been unwilling to properly engage the issue, even in spite of public opinion that overwhelmingly opposes an absolute ban. This is not to suggest that public opinion should be the primary factor in making such decisions, but if Parliament will not act to protect and promote rights, at what point should the Court step in?

As Huscroft correctly points out, the Charter is comprised of vaguely worded, ambiguous provisions over which reasonable people can reasonably be expected to disagree. And yet, it is difficult to conceive of an issue more central to “life, liberty and security of the person” than the capacity to exercise one’s own bodily autonomy free of government interference, including government interference in the guise of imposing criminal sanctions on those who might aid someone who has made the choice to end her own suffering.

When the government violates rights, it has an opportunity to advance an argument about why its actions are reasonable. On Wednesday, the government will have to justify why it effectively compels terminally ill individuals to die deaths in which the suffering exceeds the threshold at which they find life worth living, and it will need to do better than slippery-slope arguments disproven by the comparative evidence or invoking red herrings such as involuntary euthanasia, which can and should remain illegal.

We should be extremely cautious about the constant appeal to the judiciary to solve our most pressing and controversial social and political problems. The Court’s role is particularly troubling in contexts where the justices are expected to balance competing rights, or to delve into complex policy matters, such as those relating to the design of the health care system or determining the distribution of scarce resources. In such cases, even when the Court reaches a decision whose policy outcome we might agree with, we should perhaps not be quite as comfortable as we are with the prospect of judges—whose expertise lies in the law and not public policy—making the decision.

But the exercise of judicial power becomes more palatable in cases where the state imposes significant harm on people, where the rights issues at stake strike at the core of the Charter’s values, where an obstinate Parliament refuses to deal with an issue (let alone have a full-fledged debate about it), and where the state acts not to balance different rights among different groups of people but instead acts, in former Chief Justice Brian Dickson’s words, as “the singular antagonist of the individual.”

Emmett Macfarlane (@EmmMacfarlane) is an assistant professor of political science at the University of Waterloo. His book, Governing from the Bench: The Supreme Court of Canada and the Judicial Role, is published by UBC Press.