Overrepresentation of First Nations kids in the system is 'not that different' from the legacy of residential schools, says the Indigenous services minister 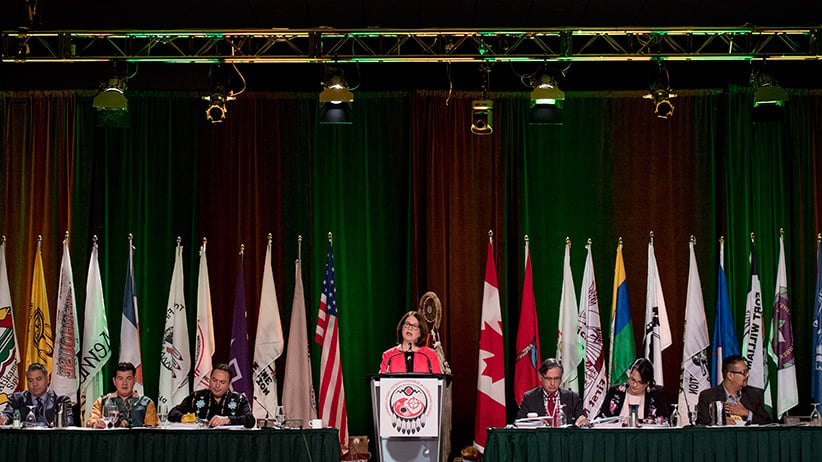 In late January, Indigenous Services Minister Jane Philpott will hold an emergency meeting of Indigenous leaders, child-welfare agencies and advocacy groups to confront what she has called a “humanitarian crisis.” Indigenous children are grossly overrepresented in foster care across Canada, with advocates saying the system has become, in effect, the next generation of residential schools. In 2016, First Nations, Métis and Inuit youth made up 52 per cent of foster children younger than 14 in the country, despite representing just eight per cent of that age group in the wider population, according to Statistics Canada.

The stunning numbers have pushed the issue to the top of Philpott’s agenda since the former health minister took over the new department in 2017. Philpott spoke to Maclean’s writer Kyle Edwards about the upcoming meeting, Ottawa’s funding policies and how she’s working to avoid repeating the mistakes of the past.

Q: What do you hope this month’s meeting will accomplish?

A: I wanted to organize a meeting together with the people who have a role to play. We know we have a long-term goal, which is obviously having kids remain with their families and in their communities. But what are the measures we can undertake in the short, medium and long-term to get there as quickly as possible?

Q: How do you ensure that children remain with their parents and communities, while addressing immediate risks to the child?

A: One of the themes we hear repeatedly is a focus on prevention. We want to make sure that we don’t end up in circumstances where there is felt to be a need for a child to be removed from their home. That involves the other parts of my job, in terms of providing good services and addressing social determinants of health. Some children are taken from their homes for reasons like poverty. To me, that’s a completely unacceptable reason that a child should be removed from their family. We need to look at addressing those issues, whether it’s housing or health issues with parents that have not been treated. As much as possible, we need to invest in areas that make sure children can safely remain in their homes. And if that’s absolutely not possible, then to look for ways they can stay with a family member.

Q: The federal and provincial governments share funding responsibility for Indigenous foster care. But child and family services (CFS) agencies are under provincial laws and jurisdiction. What power does Ottawa have over provinces?

A: Many First Nations are very interested in exerting jurisdiction over child welfare. There are some that have already done so and have had excellent outcomes, and others have done it to varying degrees. I was in the Oneida Nation of the Thames in southwestern Ontario recently, where there is a huge proportion of Onyota’a:ka children in the foster care system. The community asked me if they could explore the possibility of a pilot project where, instead of funding provincial agencies, the federal government finds ways to fund the nation directly so they can manage child welfare themselves. There are various models like that.

Q: Both the Canadian Human Rights Tribunal and federal auditor general have expressed concern over Ottawa’s funding model. Does the federal government continue to make up for child-welfare and education deficiencies by reallocating money from crucial programs like housing and infrastructure?

A: That’s very clearly one of the directives from the tribunal and we intend to meet full compliance with the tribunal, and clearly budget reallocations are an unacceptable approach.

Q: Is it still an ongoing practice?

A: It is not happening now and it will not happen going forward.

RELATED: The Liberals’ plans for Indigenous reconciliation are just beads and trinkets

Q: You’ve said that the funding for Indigenous child welfare services is inadequate. How will you address this in 2018?

A: We recognize our shortfalls in terms of funding. We are currently having conversations with leaders of various organizations, including the Assembly of First Nations, Nishnawbe Aski Nation, Chiefs of Ontario and the First Nations Child and Family Caring Society of Canada, to try to work out just what the dollar amount is. I’ve had assurances from the Minister of Finance, Bill Morneau, that those funding gaps will be addressed and that we will see investments in the 2018 budget.

Q: Do you see a connection between the high number of Indigenous children in foster care and policies in the past, like residential schools and the Sixties Scoop?

A: The best place to look to understand the importance of addressing this issue is to look at the colonial legacy of Indian residential schools. Indigenous peoples remain severely affected by the trauma that was inflicted on them. Many people argue it will take up to seven generations to completely heal from what took place. That’s been, in large part, related to what’s been described as a cultural genocide—forced assimilation of children by taking them away from their families, their culture, their language, their people. In essence, what’s happening with the overrepresentation of Indigenous children in the foster care system is not that different.

Q: How do you avoid repeating the same mistakes?

A: We know better than to continue these kinds of policies. We know how important it is that children develop healthy relationships with nurturing and caring adults. This must be in the context of their culture, surrounded by their language and in a place where they’ll be able to grow up with a cultural identity. Certainly, we know that children need to be kept safe. But we also see the terrible consequences that happen down the road for kids that have grown up in foster care. As adults, they’re severely overrepresented among missing persons and in the prison system across the country. This is one of the most pressing social issues we’re facing.

RELATED: Why 2018 will be the year of Indigenous youth

Q: In 2016, Justin Trudeau said: “No relationship is more important to our government and to Canada than the one with Indigenous peoples.” But this government has been often criticized for under-delivering on its promises. How do you make sure that the government’s commitment to Indigenous reconciliation is more than just symbolism?

Q: How does your role as minister of Indigenous Services fit into this?

A: My job is to address those socioeconomic gaps that exist between Indigenous and non-Indigenous Canadians. And I think on any measure you look at, we can provide evidence that we’re doing that. Currently, there are in the order of 9,000 homes that are either newly built, renovated or construction is underway. We have the work that’s being done on boil-water advisories and lots of work is being done on building schools and health facilities.

Q: What else do you hope to tackle this year?

A: We’re looking at further investments in housing; we have a commitment to developing a distinctions-based housing strategy in 2018. We have much more work to be done on eliminating drinking water advisories on reserves. We have things to work on like the new fiscal relationship that will find ways for more long-term funding arrangements. These changes are appropriate for a respectful, renewed relationship with Indigenous peoples.

Q: Why should Indigenous peoples trust you?

A: If I were an Indigenous person in this country, I would have many reasons to be skeptical about the authenticity of the promises that are made because countless have been broken in the past. I am in the process of building those relationships, and I’m hoping as we follow through on meeting our commitments and promises, that we will rebuild the trust that’s been so severely damaged. I’m committed to pouring my heart and soul into this job—doing everything that’s humanly possible to bring justice to Indigenous peoples.