The 5 moments that defined the 2018 Ontario election campaign

These are the biggest turning points in a provincial election that was rammed to the teeth with them, from long before the writ was ever drawn up 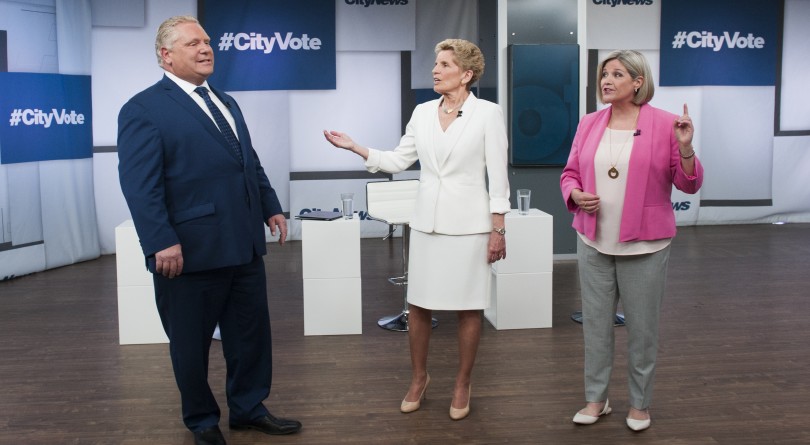 Boy, this sure was a boring election campaign, wasn’t it?

I mean, way back in the fall, everyone and his uncle (the uncle who is incredibly upset about his hydro bill, that is) knew how this thing was going to turn out, and then things unfolded exactly as we all predicted, without a single plot-twist or noteworthy development. No drama, no shifting winds of political momentum, no scandals, gaffes or surprises of any kind. We basically just all slipped into a voluntary fugue state for four weeks, and now we rouse ourselves to find that it’s suddenly election day in Ontario.

Herewith, a list of the five biggest turning points in a provincial election that was rammed to the teeth with them, from long before the writ was ever drawn up.

1. Doug Ford to reporters: No bus for you 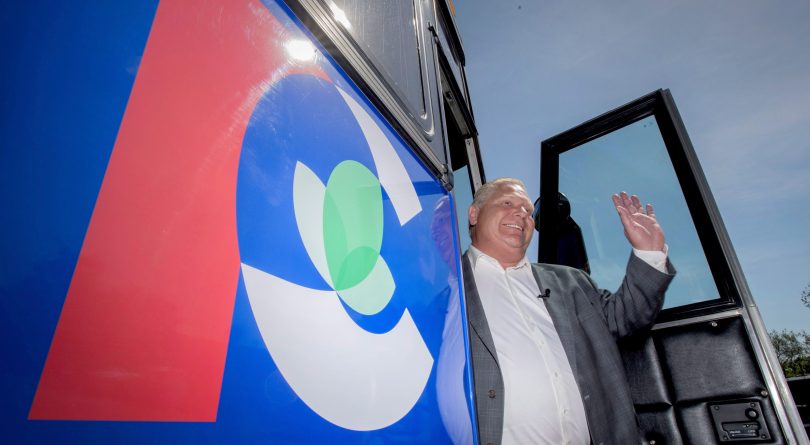 Ontario PC leader Doug Ford arrives for a candidates round table in Newmarket, Ont. on Monday, May 28, 2018. (Frank Gunn/CP)

A full month before Premier Kathleen Wynne dissolved the legislature to officially kick off the campaign, Progressive Conservative Leader Doug Ford’s camp announced that he would not—contrary to normal campaign protocol—provide a bus for reporters covering him on the campaign trail.

His spokesperson, Melissa Lantsman, argued that this would make no difference in coverage or access. “Most media outlets have shifted to covering events from their office and relying on live feeds,” she said in a statement. “It is in our interest to have as much media coverage as possible and will do everything we can to ensure our events are streamed online to assist in that.”

It was the first volley in a campaign that would operate with both the risk aversion of a classic frontrunner and a semi-overt hostility toward the media. Ford granted few interviews and didn’t take many questions from reporters over the course of the campaign—even on his own policy announcements. And his camp went a step further, making a Halloween costume version of a reporter out of a staff member and filming her delivering flattering accounts of campaign events and momentum, thinly disguised as legitimate news reports.

Ford also eschewed what had become the standard Canadian political practice of releasing a full costed campaign platform. He had promised to do so before the end of the campaign, but ultimately just added a section to his campaign website that listed his various promises with general price tags attached, without a full financial plan.

During the first leaders’ debate, on May 7, Wynne and Ford got into a weird, fruitless “The sky is blue. No, it’s green” argument about whether Ontario was the province with the lowest per-capita spending on services. While they squabbled, NDP Leader Andrea Horwath stood square to the audience, grinned mirthlessly, shook her head and permitted herself a single eye-roll.

As the moderator attempted to rein in the PC and Liberal leaders, Horwath gestured at them with both hands like she was presenting the world’s most ridiculous game show prize. “This is the problem with Ontario now, folks,” she said, looking directly at the studio audience and shimmying her hands back and forth in mockery. “This is the problem.”

Horwath turned in a strong—if unremarkable—debate performance that night. But what she succeeded in doing was beginning to hammer home the message she would stick to for the rest of the campaign: there is a credible alternative to these other two options that are driving you nuts, and it’s me.

NDP support had just started to ease upward before the debate, but after this point is when Horwath’s party really picked up momentum. Within weeks, they had gobbled up the seemingly insurmountable PC lead and were locked in a virtual dead heat with Ford’s party.

It was during the third and final leaders’ debate that Wynne made a startling pivot in her message. Her party had been running a distant third in the polls throughout the campaign, and the personal antipathy toward Wynne was off the charts in a way that was tough to make rational sense of.

That public resentment was a constant drumbeat in the background of every interview she did and appearance she made, acknowledged and grappled with to varying degrees.

And so she opened her remarks at the debate with the same tagline that was used in a stark video her campaign released online at the same moment: “Sorry. Not sorry.” On the debate stage, Wynne explained, “I’m really genuinely sorry that more people don’t like me. But I am not sorry about all the things we’re doing in Ontario to make life better.” She listed off measures she considered the successes of her government, including free tuition for low-income students and raising the minimum wage.

The video included a voiceover with Wynne reading from much the same script. The only visual was a tight, unflinching shot of her face in which she lifted her gaze to stare directly at the viewer, with a somber expression gradually giving way to a grin of defiant pride. The video and echoing of the same message in the debate seemed less designed to win over critics than one last attempt for Wynne to publicly define her legacy—a political epitaph rather than an ad campaign, really.

As it turned out, that’s exactly what “Sorry. Not Sorry” was.

Less than a week later—and just five days before Election Day—Wynne shocked everyone by conceding the race.

“On June 7th voters will elect a new government. I don’t know who voters will choose but I am pretty sure that it won’t be me,” she said before an incongruously cheery backdrop of children frolicking on a playground. “After Thursday, I will no longer be Ontario’s Premier. And I’m okay with that.”

A visibly emotional Wynne insisted the election was never about her, but about the people of the province she wanted to help. She argued that people wanted change, but were mostly confident about how Ontario was doing, and the opposing extremes of either an NDP or PC majority government rattled voters. Wynne attempted to cut herself and her personal unpopularity loose from the broader Liberal brand, explicitly urging a sort of strategic voting.

“The more Liberal MPPs we send to Queen’s Park on June 7th, the less likely it becomes that either Doug Ford or the NDP will be able to form a majority government,” she said. “By voting Liberal you can keep the next government, Conservative or NDP, from acting too extreme — one way or the other.”

With seat projections showing the Liberals could be reduced to a single seat or wiped out entirely, Wynne’s move was viewed as a bold—if futile—attempt at self-sacrifice by some, and by others as a patronizing sort of micromanagement. And the dividing line there was probably a near-perfect match for what people thought of her before she delivered her tearful farewell.

READ: What happens if Kathleen Wynne and the Liberals only win one seat? 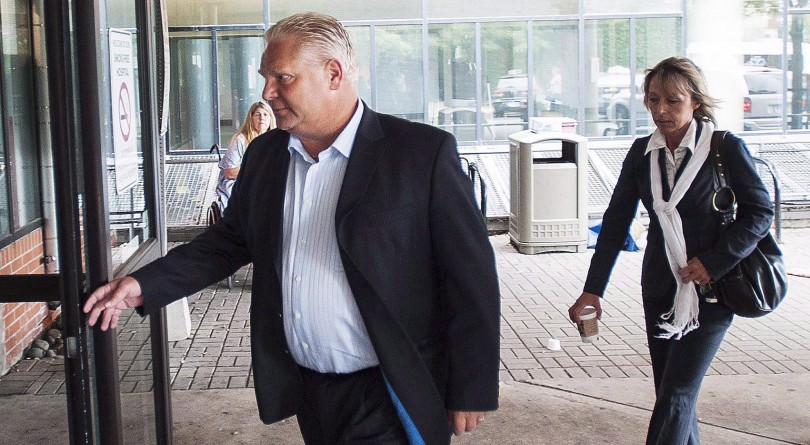 The final bombshell of the campaign was a lawsuit filed on June 1 by Renata Ford, the widow of Doug Ford’s late brother Rob, on behalf of herself and her two young children. Renata is suing her late husband’s brother for $16.5 million, alleging that Doug and his older brother Randy so badly mismanaged the family business, Deco Labels, that they had to plunder money from their late father’s estate to keep it afloat.

The suit further alleges that when Rob died, his shares in the family business went to his widow, but that Doug urged her to settle the estate without lawyers and she was unable to get an account of her late husband’s assets. The lawsuit claims that Doug has “knowingly and deliberately put (Renata and her two children) in a highly stressful and unfair financial position during their period of grief after Rob Ford’s death, and continued to do so for more than two years after Rob Ford’s death.”

None of the claims has been tested in court.

Doug Ford fired back: “Renata’s lawyers have been clear to us throughout this campaign, that either we hand over money, or they would go public with these false claims, and that is exactly what they have done, with three days to go until the election.”

His mother, Diane Ford, called the allegations in the middle of an election campaign “heartbreaking” and accused Renata of having “serious struggles with addiction.”

Now, with election day here and Ontarians choosing from among what many see as a deeply imperfect range of options, there is just one last election plot-twist to come: who gets to run the show for the next several years.