The art of the shameless, indisputable political lie

In another life, I once found myself sipping tea with a Pakistani army general while we both reclined in ornately carved and gilded chairs. I do not recall why I was in his office or what we were talking about, but since I can place this to around 2004, I suspect the topic was Afghanistan, and Canada’s sincere desire that Islamabad should stop their clandestine support of the Taliban. Whatever it was, our meeting couldn’t have been very important, because I was not very important, a junior diplomat with an emphasis on the junior.

Nonetheless, I remember one part of the meeting vividly. It was the moment I realized he was lying to me. It was a lie of such magnificent proportions that I paused, backtracked, and asked the question again, because what I heard him say was so obviously false I was sure he had misspoken. He had not. He repeated the lie, smiled and settled back in his chair. I tried again, confused. Same answer. His aide de camp even looked up from pretending to take notes and nodded his head helpfully to make sure I understood this time. There was nothing for me to do. I had been told the sky was green and the rest of the meeting was to continue as though this were true.

Like all of us, I had been lied to before. What made this moment so memorable was the epiphany I had as he shook my hand goodbye and smiled me into my Land Cruiser. I realized that some official lies can be so foundational, everything that comes after is rendered inert and wasted. There was nothing I could say to the general that would cause him to retract, and any debate that came after was meaningless. 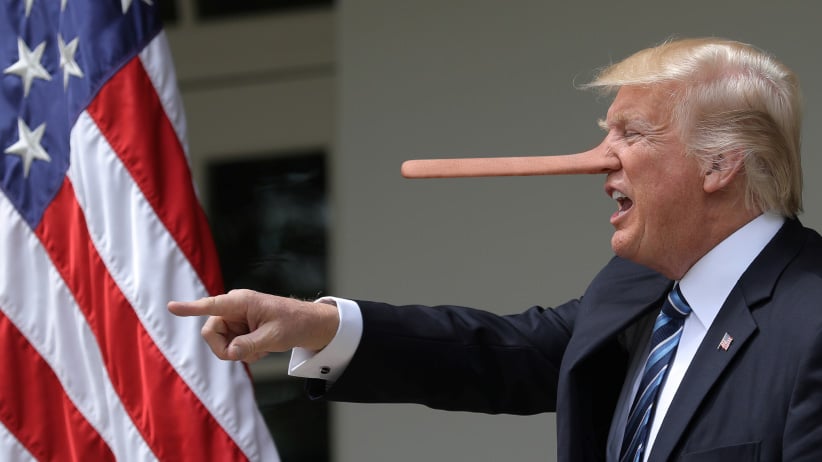 U.S. President Donald Trump attends a National Day of Prayer event at the Rose Garden of the White House in Washington D.C., U.S., May 4, 2017. (Photo illustration by Gerrit de Jonge)

I have often thought of that exchange in the past year, as I’ve watched Donald Trump lie about facts so indisputable and self-evident, his claims paradoxically defy refuting. If the president of the United States insists his predecessor wiretapped him, in the face of all evidence and denials from even his own party, what can you do? As CBS’s John Dickerson saw recently, there is no point in pressing him or debating him—he won’t back down. The lie is so grand it doesn’t require any support, any additional explanation or detail—it is self-supporting. A barrier you cannot move or step around.

We tried for a while, though. Valiant journalists would chronicle Trump’s daily list of false statements. Fact-checking sites would carefully tabulate all the data to explain he was lying. Clinton spent days preparing for debates so she could clinically unstitch his fabrications. None of that mattered, though. His lies were monumental and immovable.

And, just a few short months later, we’ve now grown accustomed to them. The president keeps telling us his first 100 days were incredible, and his electoral college win was unprecedented, and the sky is green. But we don’t react with much outrage anymore. The chyron simply reads “president makes false claim,” and we move on.

They lie about how much they care about Indigenous Canadians, for example. Maybe they don’t think they’re lying. But if improving the lives of First Nations communities has really been a priority for every government in the past 50 years, why are infant mortality rates still twice the national average? If our prime ministers believed a strong armed forces is important, as they all have claimed, why is our Navy so rusted out it can’t cross the Atlantic on its own? Prime minister after prime minister has stood in the House of Commons for generations and told us they are protecting and developing the Canadian North. But there it remains, undeveloped. We are told the books will balance, and they rarely ever do. We are told infrastructure projects will be on time and on budget and they never are. We are told there is a plan, and there isn’t. We are told they will fix it, but they don’t.

In Canada, our political lies are less noticed than Trump’s, but they are just as grand, just as shameless, and evidently, just as irrefutable. It makes me almost miss my Pakistani general.