The B.C. election and the folly of strategic voting

Proponents of strategic voting in the B.C. election have granted political polls a status that they haven’t earned 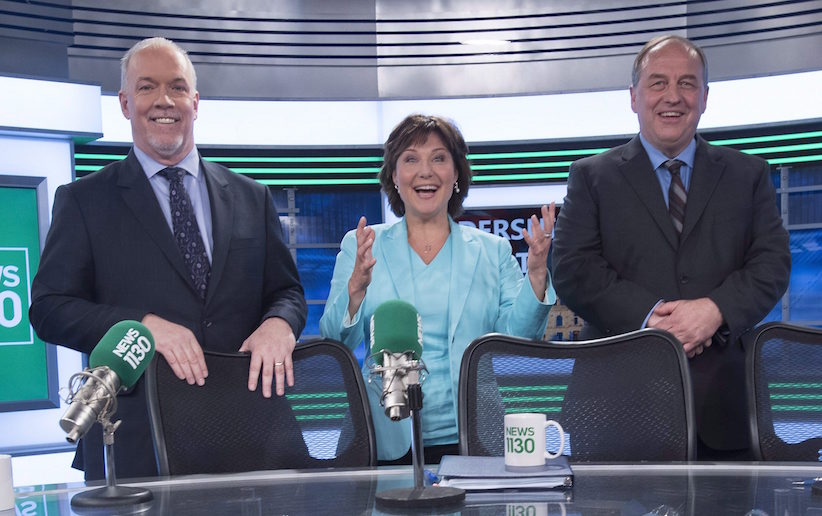 In two weeks, British Columbians will go to the polls to decide whether to grant Premier Christy Clark’s Liberals a third term. Three political parties are expected to win seats, and while the opposition NDP and the surging Green Party have their supporters, many British Columbians are viewing this election as a referendum on the governing party. To that end, the “Leave” side, anxious that Green voters may split the vote in key ridings, is urging its supporters to do their part and vote strategically.

This is hardly new advice in Canada: no fewer, and possibly more, than three strategic voting organizations set up shop during the 2015 federal election. It’s easy to see the appeal. You can stumble into the voting booth and mark an X with no regard for the broader implications of your choice, or you can approach your civic duty with a strategy. With the future of the province (or country) in your hands, it’s somewhere between selfish and negligent to risk splitting the vote. In other words: if you want to boot Christy Clark from the premier’s office, it’s just plain irresponsible to simply vote for the candidate you want to win.

READ MORE: Why John Horgan got scrappy in the B.C. election debate

Many good columns have been written by British Columbians arguing for (and against) various parties and candidates; I have little to add to the genre. I am more interested in examining the strategy behind the anti-Liberal strategic vote. There are slight variations, but the basic premise is this: check the polls for your riding. If any party, Liberal or otherwise, has a huge lead, vote your conscience. If, on the other hand, the numbers are close, vote for the candidate most likely to beat the Liberal.

This approach essentially instructs voters to disregard any difference between the NDP and Greens, and defer entirely to polls. Consequently, it is shrewd to ask whether polls have earned their standing as the anti-Liberal voter’s Magic 8-Ball. Fortunately, there is no shortage of historical polling data available to us. The polls from the 2013 B.C. election are perhaps the most pertinent here. For a solid month, the Liberals trailed the NDP in every poll. On Election Day, Angus Reid—an established polling company—had the NDP at 45 per cent of decided voters and leaners, with the governing Liberals in second place with 36 per cent.  ThreeHundredEight.com projected 49 seats for the NDP, compared to just 35 for the Liberals. If ever anyone was a lock for the B.C. premiership, surely it was NDP leader Adrian Dix. “IF THIS MAN KICKED A DOG, HE’D STILL WIN THE ELECTION!” blared the front page of The Province. But the only poll that mattered told a different story: voters delivered 44.4 per cent of the popular vote and 50 of the province’s 85 seats to the Liberals; the NDP’s 39.5 per cent vote share and 34 seats were a poor consolation prize. (No word on how many dogs Adrian Dix kicked during the final hours of his campaign.)

Not exactly confidence-inspiring. I asked Vote Strategic BC (@votestrategicbc), which encourages anti-Liberal voters to engage in poll-based decision-making, “Could you tell me what makes these polls more reliable than the ones that predicted an NDP government at this time four years ago?” Their response was frank, if nothing else: “Nope. Just something to think about. Some of my data is past election results. Current % projections from @2closetocall.” I then posed the same question to Bryan Breguet‏ at @2closetocall; he replied, “I wish I had a good answer but I don’t… at the end of the day, we can only hope.” He mentioned that the 2017 polls used different methodologies; whether those methodologies address the 2013 polls’ shortcomings (including failing to account for the 11 per cent of voters who made their decision on voting day) is a different matter.

It is illuminating that pollsters and their backers, when asked to defend their product, do not assure us that their misses were outliers. They do not even point to the fine print on their own polls, that austere mathematical promise that most—say, 19 out of 20—of their polls are correct within a small margin—say, three or four percent. Instead, those who urge strategic voting defend their hard numbers with squishy appeals to “hope.” This is because it is not the case that 19 out of 20 Canadian political polls predict vote shares within three percent. That figure—a “confidence interval,” to use the statistical lingo—assumes a representative sample of voters who will cast ballots on election day, which is not easy to achieve among a fickle population where people are armed with call display and generally have better things to do than talk to pollsters. What trust Canadians have in our political polls was largely earned by their more accurate American counterparts, which benefit from a population whose voters are more sharply polarized, have fewer viable political parties to choose from, and are less likely to change their minds at the last minute. And yet even the golden age of American political polls may be ending: the results of the last U.S. election caught nearly every pollster off guard.

Canadian strategic voting organizations, however, are undeterred by these facts. It is unclear whether they even know how to evaluate their own work; or whether they are merely uninterested in assessing how successful they were in strategically moving votes. The leader of Leadnow, the most prominent of the stop-Harper organizations, appeared at an election party to talk to a national reporter about how strategic voting impacted the federal election—two full hours before any results even had been released. Leadnow, which commissioned polls in swing ridings, celebrated their anointed candidates’ wins; however, a cursory glance at the numbers revealed that in many of those ridings, the Conservative candidate wasn’t even a factor. In other words, no strategy at all was necessary to keep the Conservative out; the anti-Conservative vote could have split evenly and the Conservative still wouldn’t have won. Meanwhile, some ridings in which a Conservative eked out a narrow victory weren’t even on Leadnow’s radar. Had Leadnow thought to commission polls there, they might have swung enough votes to assure a Liberal or NDP victory. Most astonishing, though, was the riding of Vancouver-Granville, where polls taken a week before the election showed the Liberal and NDP candidates running neck-and-neck. Faced with an actual opportunity to lead, Leadnow instead punted the decision to their members, who endorsed the NDP candidate. She won 27 per cent of the vote. Her Liberal opponent took 44 per cent.

Proponents of strategic voting have granted political polls a status that they haven’t earned. For the most part, strategic voting organizations have not even reckoned with their past failures, let alone explained why this time, the polls are accurate predictors of votes. They have certainly not made a compelling case for why this time, voters should consult only polls, not party platforms or pundit analyses or candidate records, before casting ballots. To be sure, it’s possible that this time, polls actually do predict voter intentions so accurately that a few good strategic voters can change the course of British Columbian history. It’s also possible that the next lottery ticket you buy will be a winner. You still shouldn’t quit your job.

Brenda Fine is a math instructor at the British Columbia Institute of Technology. She can be reached on Twitter at @moebius_strip.

Correction: An earlier version of this article said the leader of Leadnow appeared on TV on the night of the 2015 Federal election when that was not the case. The post has been updated.