The Conservatives will pick a new leader in September

Politics Insider for Mar. 3: Jean Charest hobnobs with Tories as he mulls over a leadership run; the United Nations General Assembly officially ‘deplores’ Russia's invasion of Ukraine; Petro Poroshenko asks the UN to enforce a no-fly zone over Ukraine 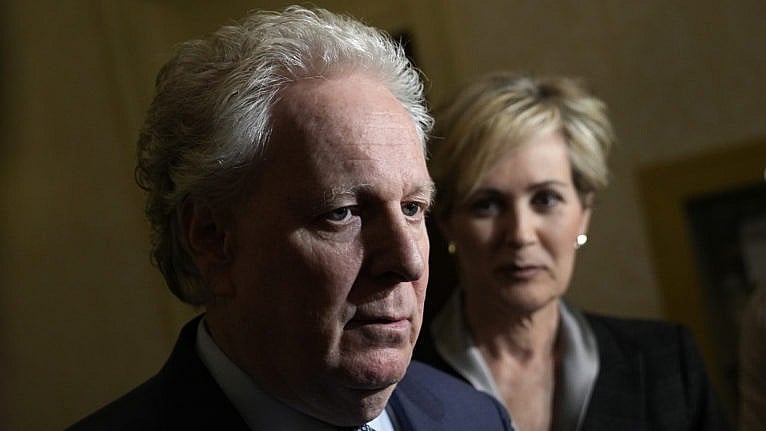 Charest speaks to reporters as he arrives with his wife Michele Dionne for an event with potential caucus supporters in Ottawa on March 2, 2022 (Justin Tang/CP)

Setback for Poilievre: Conservatives will select a new leader on Sept. 10, CBC reported late Wednesday. The membership cutoff will be June 3. Supporters of Pierre Poilievre had sought a May cutoff and June convention. Would-be candidates from the PC side, including Patrick Brown, Tasha Kheiriddin, Peter MacKay and Jean Charest favoured a later date, which might allow them to catch up to Pierre Poilievre, who would seem to have a commanding lead among existing members. His potential rivals had been waiting for the announcement of the rules before deciding whether to throw their hats in the ring.

Chateau soirée: Charest was in Ottawa Wednesday night to meet with CPC caucus members, likely a preliminary step to announcing his candidacy. While he was hobnobbing with Tories at the Chateau Laurier, Conservatives in Poilievre’s camp attacked him on Twitter.

La Presse has a story on Charest’s night out (translation), pointing out in passing that some legal unpleasantness has recently been resolved, clearing the way for his candidacy.

On Monday, the Permanent Anti-Corruption Unit closed the Mâchurer investigation into the financing of the Liberal Party of Quebec at the time when the party was led by Mr. Charest, after eight years of unsuccessful proceedings. This is therefore one less obstacle for his candidacy for the leadership of the Conservative Party.

Whither Chong? Michael Chong has not ruled out running, CP reports.

No to war: The General Assembly of the United Nations voted 141-5 Wednesday to “deplore” the Russian invasion of Ukraine, the Globe reports, an unusual display of unity.

“The message of the General Assembly is loud and clear,” UN Secretary-General Antonio Guterres told journalists after the vote on Wednesday. “End hostilities in Ukraine – now. Silence the guns – now. Open the door to dialogue and diplomacy – now.”

No-fly request: In an interview with CBC on Wednesday, Former Ukrainian president Petro Poroshenko pleaded with Canada and its NATO allies to enforce a no-fly zone above Ukraine as Russia intensifies its aerial bombardment: “We’re fighting for the security in Europe here, fighting for France, for Germany, for Poland, for Spain. And can you imagine, we’re here fighting for Canada.”

NATO leaders say a no-fly zone could amount to a direct confrontation between NATO and the Russian military, which could lead to nuclear war, and it is not under consideration.

Freeland warned them: In the Globe, Konrad Yakabuski has an interesting column about the role played by Chrystia Freeland in Canada’s response to the war in Ukraine. Freeland has drawn on a lifetime’s experience in her push for sanctions against Russia.

According to a Reuters report, Ms. Freeland directly addressed Russian Finance Minister Anton Siluanov and central bank governor Elvira Nabiullina during a Feb. 18 meeting of Group of Twenty finance officials, warning the duo not to doubt the resolve of “like-minded democracies” to punish Russia if it invaded Ukraine. Politico reported on Sunday that Ms. Freeland had spent much of last week “pushing the idea of sanctioning the central bank” among her Group of Seven colleagues.

Off to war: The Globe also has a story about an 18-year-old Toronto man headed to Ukraine in hopes of fighting for his country.

Still in jail: Convoy protest leader Tamara Lich argued in court on Wednesday that the judge who denied her bail should not have ruled on the case because she ran for the Liberals in 2011, the Star reports. Lich’s next hearing will be March 7.

Convoy lessons: In Maclean’s, Paul Wells has a thoughtful meditation on the convoy’s time in Ottawa.

The Freedom Convoy rode into Canada’s fourth-largest city at the end of January on a stack of threats, some more subtle than others, to Canada’s civil order and to people who had the misfortune of residing where the occupiers wanted to park. The siege’s organizers dusted off a “Memorandum of Understanding,” already written before the idea for a truckers’ convoy came to them, that called for the Senate and the Governor General to depose Justin Trudeau from his post as prime minister. This is not something the Senate and Governor General can do. So it was really a Memorandum of Misunderstanding, or of Not Wanting to Understand. Organizers eventually withdrew the memorandum from their website, but for weeks they refused to withdraw themselves from the centre of Canada’s capital city.

Wells notes that one of the remarkable things about the convoyers’ Ottawa encampment was its speed, compared with the way things usually work in the city.

Next to the hot tub is the former U.S. embassy, three stories of Indiana limestone directly facing the Centre Block. Since 1999, it has stood empty because there’s a new, far bigger embassy around the corner. In the early 2000s, somebody decided the grand old building should become Canada’s national portrait gallery. When the Conservatives came to office in 2006, I guess they worried about whose portraits would go in the thing, and whose wouldn’t, so they spent nearly a decade ensuring it wouldn’t be a portrait gallery. When the Liberals returned in 2015, they decided it should be an Indigenous Peoples space. There have been substantial disagreements about exactly what that should entail. So, for 23 years now, that prime real estate has lain fallow. For a while now, I’ve imagined the former embassy as a stop on an Ottawa Paralysis Tour I might run for tourists.