Jen Gerson: The tempest at last week's Tory convention confirmed what no politician seems willing to admit: they're scared to take on Big Milk 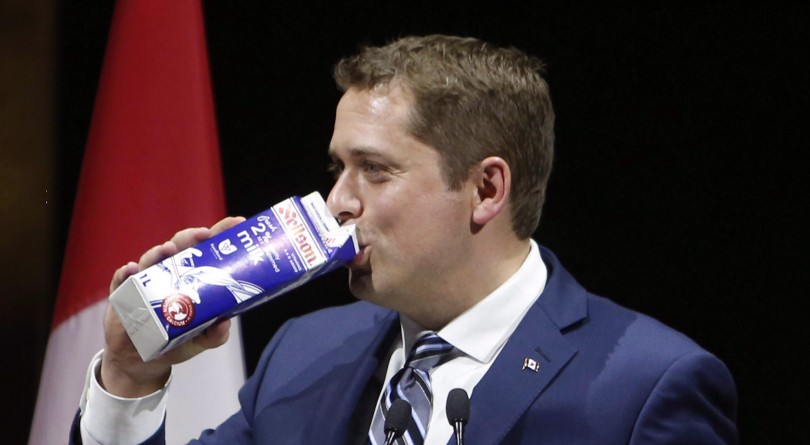 If you were ever curious as to how cheese gets made in Canada, delegates of the Conservative Part of Canada convention in Halifax got a rare seat for the whole messy process over the weekend.

As per usual, several delegates had the gall to show up to a Conservative Party convention hoping to debate a motion to abolish Supply Management—the top-down Soviet-lite regime that sets quotas on how much milk, eggs and cheese farmers in this country can produce.

As this long-standing policy has made a small number of increasingly consolidated corporate farmers mostly located in vote-rich regions like Ontario and Quebec comparatively wealthy, supply management has proven itself a difficult political knot to pull.

I’d like to see a few more Conservative politicians—ostensibly committed to the importance of free markets and small governments—even try to list supply management’s virtues. Just because the sputtering cognitive dissonance would be funny to watch.

Anyway, some daft lobbyist attending the Conservative convention from the Dairy Farmers of Canada (DFC) mislaid one of their briefing manuals in the worst possible place: on the floor of the Alberta section of the conference. Alberta: a major producer of non-supply managed agriculture like, pork, beef, and sugar, is a particular hotbed of anti-supply management rhetorical furor. We see the whole thing as yet another federal government subsidy for central Canada.

It is Cheese Bombardier.

The brief explained how the dairy-egg-chicken-and-turkey cartel should work to defeat the anti supply management motion, noting that the matter might rot in a breakout session before ever hitting the floor of convention: Death by Process being the tried-and-true method of all centralized parties who wish to keep the ideological rowdies in line.

“There are still some voices in the Conservative Party that have yet to fully understand why supply management is good for Canadians and the economy. We are committed to continuing to educate them on the benefits of supply management,” the DFC binder puts forward as “proposed messaging” for its representatives.

(Good grief, even the language in this thing is Soviet. If I disappear in the near future, please assume some milk-fed farm boys showed up at my house and insisted on removing me to the nearest re-education centre, all the better to expound upon the Greater Glory of Canadian Cream.)

The supply management cartel sent 25 representatives to the convention, and timed its reception between the breakout and the plenary—giving them plenty of time to sway delegates in the off chance the motion evaded the first process trolls.

It never came to that, of course. According to Red Deer delegate Denton Wierzba, one of the contributing authors to the motion; the matter was essentially filibustered in the breakout session and never went any further. Not that even that would have mattered.

The DFC policy binder stated, quite clearly: “The powers of the Leader are far reaching in preventing a policy from being in the party platform. DFC has been told by the Leader’s office that he will exercise this power, and that this policy will not be in the Conservative election platform regardless of the outcome at convention.”

RELATED: How to scrap supply management—a lesson from down under

Later, Vulcan Alta., delegate Matthew Bexte found this text in the binder, and tweeted it. As the outrage grew online, a spokesman from Conservative Party leader Andrew Scheer tweeted out an screen-grab from an email sent from DFC correcting the statement in the Dairy Farmer’s own policy binder, claimed that the lobby group had not been given any such assurances by Scheer’s office.

Some important clarification here from @dfc_plc on their #CPC18 briefing note. #cdnpoli pic.twitter.com/Y4SRacNCgD

But it appeared to have been sent after Bexte posted the documents to Twitter—timing that, not surprisingly, he found suspicious.

I spent thousands of dollars to get to #cpc18, and it turns out that there was a coordinated effort between Big Dairy and @AndrewScheer to betray members and our right to be heard. The outcome was predetermined, our voices don’t matter. #cdnpoli #abpoli pic.twitter.com/zRAXPtFabD

“If they wanted to incite conspiracy theories, this is how you do it. It was so juvenile, it was almost unbelievable that they did it,” he said, between farm chores. The 22-year-old, back in Alberta, spoke to Maclean’s in the midst of his own family farm’s harvest.

“I felt betrayed. I have recent-graduate finances and I spent well over $2,000 to get across the country, debate and vote on policy as did other delegates,” he said. “People are giving hard earned money to this party and it was spent on a giant party to celebrate Andrew Scheer and fireside chats. Nothing we voted on had any meaning whatsoever.”

Scheer responded to the allegations of the policy book with a denial. No secret deals with the DFC had been agreed to, though the leader’s unmitigated support for Canada’s Dairy Farmers ™ remains unchanged. Cue the cute graphic of him chugging milk.

If it makes Bexte feel any better, he’s not the only one pushing around coin in the hopes of getting his voice heard. The lobbyist registry show that the Dairy Farmers of Canada has been exceedingly active on Parliament Hill over the last year, racking up more than 100 communication reports, many of which seem to chiefly concern international trade. Look up the word “dairy” in the database, and you’ll find the industry has a handful of firms that are making themselves an active presence in the corridors of power.

Their presence appears to be effective; we have three major political parties that are all supposed to hold largely competing ideological viewpoints. Yet all three are in total lockstep on the matter of Supply Management. It’s no exaggeration to point out that our political class in this country seems to be more fearful of the dairy cartel than the gun lobby—as far as a gun lobby even exists here.

A few sobering facts should, then, be relayed. Supply managed food doesn’t even comprise the majority of Canadian agriculture; commodities like beef, pork, and grain far outweigh dairy and poultry in terms sheer economic importance. The former commodities all compete on the global market without the benefit of this kind of protectionism, I’ll note—and, thus, all of them depend on a good trade deal with the U.S.

For that matter, so does the auto sector. The whole economy, really.

It’s also worthwhile to remember that politicians and policy wonks have a habit of getting absorbed by obsessions that bear no connection to the real world fascinations of ordinary people. (Remember electoral reform, folks? No?)

I have no expensive polling or analytics data to back this take up; but my gut instinct is that most Canadians have no idea what supply management is or does. They don’t care at all about the griping of a few thousand utterly self-interested and comparatively well-off dairy and poultry farmers. Especially as those farmers made their bank through inflated food prices that, uh, we pay.

If the price of milk went down tomorrow, most people would think: “Oh, that’s nice!” and wonder when their local supermarket started stocking European butter and cheese. There’s also good reason to suspect that canning supply management would be a boon for many dairy and poultry farmers themselves who would be happy to sell their wares more freely abroad. Just as the rest of Canada’s farmer’s do.

As far as I can gather, the only thing that allows the dairy cartel to wield this much power is the pervasive sense that abolishing supply management would lead to popular revolt in Quebec. And that dairy lobby groups would use their considerable wealth to launch attack ads against any political opponent.

And, of course, the group that has the most to gain by ensuring we pundits believe both of these myths is the cartel itself.

Canada is in an enormous pickle on the trade file right now. As Mexico and the U.S. come to a bilateral deal on NAFTA, the pressure is now on us to follow suit. Trump has publicly made supply management the key bone of contention in creating a deal with Canada.

We might be better off to bide our time and let the bilateral deal as it stands stall in Congress, as it probably will.

Further, there is always risk to dealing with a bully. That concession will force more concessions and so on.

I have no good answer to these points.

But if our only serious concession on NAFTA is supply management, Trump could secure the public relations win he is seeking also consenting to a deal that was in no way an actual loss for Canada.

Conversely, allowing all of NAFTA to fall apart so we can maintain an inefficient protection for dairy and poultry farmers would be craven and daft. The fact that our politicians seem so utterly beholden to the dairy lobby, so completely unwilling make the decision that is so obviously in the national interest, and so ill-equipped to fight a special-interest group for the benefit of Middle Class Families—that is probably the most damning observation anyone can make.

Chickens, the whole lot of them.