The debate pratfalls that Kenney and Notley must avoid 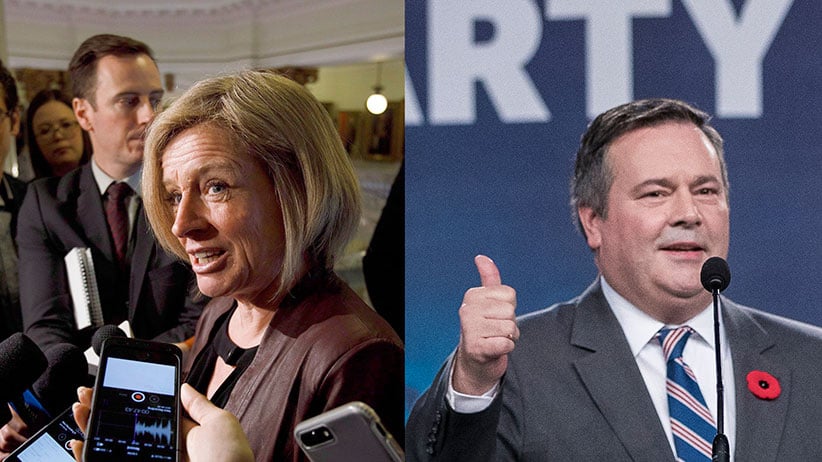 Most political debates are dull affairs that leave everyone hoping for a mythical “knockout punch” that never arrives. The Alberta debate in 2015 was the exception to the rule, thrilling and consequential. NDP leader Rachel Notley emerged the clear winner and strongest performer, especially thanks to Tory premier Jim Prentice’s right hook into his own jaw, which came in the form of his condescending remark to Notley that “math is difficult.” Two weeks later, the NDP won its majority.

While tempting, it’s folly to expect another game-changing affair tonight, and not just owing to the law of averages. In 2015, all four party leaders onstage had less than eight months, and had to introduce themselves to voters in a highly volatile contest—the Wildrose, NDP and Tories had each led polls in the previous weeks. Notley’s the only repeat debater this time, but she and the UCP’s Jason Kenney are by now familiar figures. We know who’s leading and who’s trying to carve into that lead, and that Liberals’ David Khan and Alberta Party’s Stephen Mandel will be seen as the evening’s sideshows.

With all that pooh-poohing aside, the first clash between these two formidable politicians should be fascinating.

What Kenney has to do: He’s been in politics for two decades, yet this is a major political test for him—sure, he had United Conservative leadership debates, but it’s easier to cater to a red-meat partisan crowd than to the broad public (plus, Kenney had his kamikaze accomplice’s help to try rattling former Wildrose leader Brian Jean, a so-so debater).

Kenney must sound like a premier, but not somebody already selecting office furniture; a fighter for Alberta’s interests, but not against the well-liked Notley. Kenney no doubt carefully studied the 2015 Prentice tape on how not to mansplain to a female leader in his first showdown with one. He’d better have his defences ready on accusations of his candidates’ bigotry and his own platform’s intolerant measure to roll back protections for school support groups for LGBTQ youth.

What Notley has to do: Whether you believe New Democrats are still far behind, or is closing in after a rough two weeks for their rival, Thursday may offer their best hopes of definitively turning things their way. Stakes are high for Notley to give yet another sterling performance—but also to somehow rattle Kenney, a notoriously disciplined and methodical campaigner. She’ll have to assure Albertans that she, too, can fight for them and lift the economy, though she’ll be cornered by promises from all three of her rivals to reverse her corporate tax hike.

If Notley is too aggressive in attacking Kenney, her campaign’s main target, that may backfire. But 2015 also showed she’s deft at delivering a pre-scripted jab with a smile: “I’m not really sure that’s the best way to be talking to a donor, Mr. Prentice” she said of Brian Jean, who had contributed to the Tory’s leadership bid.

Notley seemed to publicly rehearse messages Wednesday: she made direct appeals to centre-right voters who bristle at Kenney’s hawkish tendencies and his teammates’ troubling views, complete with an ad depicting a lifelong Tory willing to give the NDP his vote.

“Folks just don’t see an Alberta they recognize in Mr. Kenney’s UCP. They don’t see today’s Alberta, they see the Sky Palace on the shores of the Lake of Fire.” If you get those references, you may chuckle. If their too inside-baseball for most people, she’s got a problem.

Watch out for wonkishness from Kenney and Notley; they both like getting tangled in the policy weeds. But don’t expect a dramaticmano a mano image of the two frontrunners. Thanks to a pre-debate draw, Kenney will stand at the far-left (heh) side of the stage, with the Liberals’ Khan between him and Notley. Mandel drew the lectern at the opposite end.

The gruelling, muddy campaign has likely been unkind to many political livers. May as well mix fun in with the bodily punishment! Take the alcoholic sip of your choice if you hear a leader say:

A large swig if you hear:

Down the bottle if there is:

Not sure what to sip: beer, wine, bathtub gin? Here’s a topical cocktail recipe: the kamikaze.

One wouldn’t expect a former Reform MP and head of the Canadian Taxpayers Federation to propose a Crown corporation that picks business winners and losers, but sometimes Jason Kenney surprises us. He promised a UCP government would create an Aboriginal Opportunities Corp. that would offer technical support and loan guarantees or financing to help Alberta First Nations invest in natural resource development projects or pipelines. Many Indigenous communities are already active energy developers throughout Alberta and some are interested in buying the Trans Mountain pipeline off Ottawa. Kenney’s plan would make it easier for more First Nations to enter the energy development, in part as a counterweight to the Indigenous leaders and groups in B.C. and elsewhere who loudly oppose pipelines and development.

His plan seemed to exclude another type of energy ventures the NDP government have encouraged First Nations bands to pursue: wind and solar energy projects. Kenney maintains his focus on non-renewables.

Kenney says the $1 billion seed money for his AOC (not to be confused with America’s  very different AOC) would come through cancelling the Notley government’s $3.7-billion oil-by-rail program. He appears to neglect the fact that the NDP’s venture would also generate billions in shipping fees; also that scrapping the three-year oil car contracts would come with a costly fight. (Edmonton Journal)

Charles Adler, the conservative national radio host for Corus Radio, subjected Kenney to a remarkable, hour-long challenge over the prevalence in the UCP of candidates with intolerant views, his refusal to dump a candidate who discussed homosexual love in tandem with pedophilia in a sermon five years ago, and his insistence on rolling back Alberta’s protections for LGBTQ school peer support clubs. Adler pushed Kenney to apologize for some of his old views and activism on gay rights. Pressed three times, he did not. It’s an eye-opening and at times brutal hour of 33 minutes of radio; much of it will make tonight’s debate seem tame. (CHED 630) (Adler interviewed Notley as well on Wednesday)

Emma McIntosh on why the UCP “kamikaze” probe must go on: “Justice Anne Kirker denied a request from Callaway and five co-applicants for an emergency court order that would’ve paused the investigation until after the April 16 vote. In order to succeed, Callaway’s side would have had to prove there would be irreparable harm unless the investigation was paused immediately — something it failed to do, Kirker ruled. ‘Even if there were evidence of irreparable harm … it would, in my view, be outweighed’ by the public interest in allowing the investigation to continue without delay, Kirker said.” (Star Calgary)

Don Braid on the UCP’s danger point: “Has UCP Leader Jason Kenney come to his lake of fire crisis? That was the dramatic point in the 2012 election campaign when Wildrose started slipping after a candidate said gays would forever suffer in a literal lake of fire. Today, Kenney’s aspiring and current candidates have made more comments that are homophobic, racist, Islamophobic, misogynist and even white supremacist than Danielle Smith ever faced from her erratic Wildrose crew.” (Calgary Herald)

Paige Parsons on Alberta’s fight against campaign misinformation: “Platforms like Facebook and Twitter have been used to spread misinformation — the most notorious example being Russia’s use of the tactic to interfere in the 2016 United States election. But since then, both social media companies and governments around the world have said they’ve stepped up efforts to fortify against online malfeasance — and the upcoming Alberta election is no exception. During its preparations for the writ drop, Elections Alberta sought advice from the Canadian Security Intelligence Service (CSIS) about preventing online malfeasance.” (Edmonton Journal)

Tristin Hopper on whether UCP could still mange to lose:  “In Canada, it’s not at all unprecedented that a provincial party has squandered this kind of lead before voting day. The most recent example comes out of B.C. For more than a year leading up to the 2013 provincial election, the NDP was leading the B.C. Liberals by as much as 20 points. ‘If this man kicked a dog, he’d still win the election, was the infamous headline in The Province referring to NDP leader Adrian Dix. When voting day came, however, the NDP not only failed to form government, but they lost seats.” (National Post)