The federal leaders debate through the lens of show business

Jaime Weinman: Trudeau was a telegenic talking-points robot, the type of PM whose job will be lost to automation some day 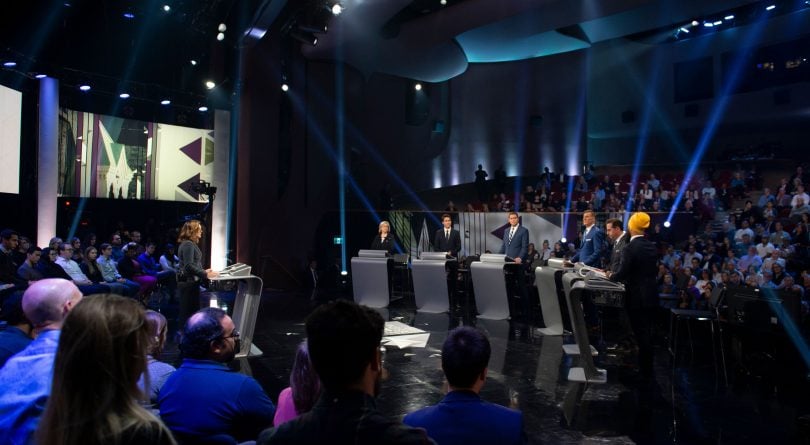 Jaime J. Weinman is a Toronto-based writer and critic who follows television, politics and culture.

Here I am again with some reactions to tonight’s television show: the English-language federal leaders debate, the first production of a body with the very Canadian name of “Canadian Debate Production Partnership.” As I mentioned last time I wrote a post like this, I’ve been asked to focus on the surface aspects of the debate; others will be along soon to talk about the issues that really matter. These debates, after all, are about things that actually affect our lives, and they deserve to be taken seriously. But when watching it on TV, the first thing that occurs to my superficial mind is, there sure is a lot of blue.

The set design, lighting and podium placement ensured that every shot would feature the colour blue in some prominent way—blue walls, blue lights, light-blue streaks on dark-blue walls. The “in-the-round” format, with the live audience seated around the leaders and moderators, meant that you could look in the background and see audience members with blue spots of light bouncing off their heads. I don’t think there’s any particularly Canadian significance to the colour blue; its role is probably to create the feeling that the debate is taking place in the evening, whereas black or white might give viewers the impression of the late night or early morning.

This emphasis on production design may give the impression that there isn’t much to say about the performance of the moderators, and this impression is right. The use of many different moderators, who vanished and were replaced every few minutes, didn’t create much variety of approach. (It sometimes seemed hard to tell the difference between the moderators’ own questions and the ones provided by ordinary Canadians.)

The last of the moderators, the CBC’s Rosemary Barton, was by far the most effective, because she seemed to recognize that her best opportunity to make her presence felt was to concentrate on keeping the debaters under control, constantly reminding them of how much time they had, or to let the other debater speak. This allowed her the occasional dig at a party leader—like when she mentioned, almost offhand, that Justin Trudeau hadn’t actually answered part of a question—while keeping focused on the task of thwarting another outbreak of cross-talk.

As for the performances of the debaters, even when they weren’t talking over each other, none of them had time to say much that deserves more than a surface-level analysis. A debate like this is about the tone or affect that each speaker is trying to convey. Andrew Scheer was the only one who didn’t seem to me to know exactly what he wanted to be. He began by calling Trudeau a “phoney” and bringing up the blackface photos. This pugnacious opening was probably necessary if he wanted to define Trudeau in the audience’s mind, but it meant that his own persona was not clearly defined—did he want us to think of him as a fighter, or the debate moderator from Billy Madison, who criticized others in a soft-spoken way?

Trudeau’s character at this point might be described as a telegenic talking-points robot, the type of prime minister whose job will be lost to automation some day. I had the contrarian thought that maybe the blackface photo scandal had helped him by forcing him to avoid talking about what a good person he is, allowing him instead to play the part of middle-of-the-road politicians everywhere who say that all is great, their government has a plan for everything, and that everyone else on the stage is a wild-eyed radical whose policies will never work. He was acting like the Mitt Romney of Canada.

MORE: A leaders debate for our messy politics

Elizabeth May, however, delivered the best performance of the night: well-rehearsed and well-timed with her talking points, she made sure to sound human when possible (giving shout-outs to the places shown in the remote question segments), and she found just the right moment to remind the audience that she was the only woman among the six leaders. Jagmeet Singh also did well; he portrayed himself as the regular just-folks person on the stage, creating the aura of a man who has experienced the joys and challenges of being an everyday guy in a diverse country.

As for the blue-suited Maxime Bernier (whose presence at the debate Singh criticized); he didn’t create quite as many fireworks as one might have predicted, because except for an early question where they had to debate him directly, most of the candidates seemed to understand that clashing with Bernier would simply help him create his preferred narrative as the only “real Canadian” in the room. I didn’t find him very effective in his attempt to make the case for a Donald Trump-style nationalist right in Canada, because he spent so much time repeating conventional U.S.-conservative talking points about cutting taxes, dismissing global warming as a threat, et cetera. These talking points are losing their appeal—even in the States.

And then there was Yves-François Blanchet. He managed to get the best laugh line of the night by pointing out how quick Bernier was to interrupt him. It’s not an electoral victory, but it’s a show-business victory, and the two fields are getting more and more similar every day.