The Tories have won the province's first minority in more than a century, and the Greens have supplanted the Liberals as the No. 2 party 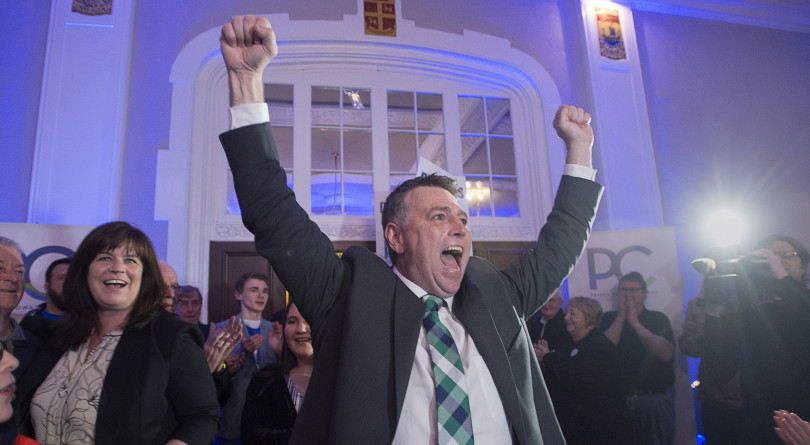 The green wave that was expected to sweep over P.E.I. turned out to be mostly blue in a historic decision Tuesday night that put the Progressive Conservatives in power with a minority government and the Greens in Official Opposition.

At press time, the Progressive Conservative party had won 12 of the province’s 27 seats and 36.5 per cent of the vote; the Greens had nabbed eight and 30.6 per cent of ballots cast—greater numbers than it has achieved in any other province and enough to upend several Liberal incumbents. Overall, the governing Liberals faced a punishing defeat, earning just six seats (29.5 per cent of the vote) with outgoing Premier Wade MacLauchlan losing his to a PC candidate.

It was the first time in Canadian history that the Green Party—which has three seats in New Brunswick, three in B.C. and one in Ontario—has won enough to become Official Opposition.

“Historically, this is an incredible accomplishment for the Green Party,” he said, adding that it suggests there is a frustration with the normal way that politics is done, including the acrimony and constant attacks. “What both those parties did in this campaign is say ‘No, we’re different.’”

On Tuesday night, voters also rejected a proposed switch to proportional representation in a province-wide referendum vote that narrowly failed, with 12 districts voting no and 15 voting yes. The threshold for a win was 17.

Still, in a tweet, Andrew Weaver, the leader of the B.C. Green Party, offered his “heartfelt congratulations” to Bevan-Baker and his team on their historic campaign.

While polls in the last month suggested that the Greens were poised to form a minority government, the PCs made a strong comeback in a short amount of time. They were the only party not in favour of a carbon tax.

“I don’t think it was simply because he had the better policies,” said Desserud of King. “I think it was because he was prepared to do politics differently and that’s what people were craving.”

The party had, in fact, been plagued by internal strife, but King brought it together hastily and decisively. Following his win, he said he was honoured and excited. “I would say it’s surreal almost to think about where we’ve come in a short time,” King said.

RELATED: P.E.I. made history with this election—just not the kind everyone expected

The campaign had been remarkably free of the melodrama and mudslinging that’s come to be expected in partisan politics. At a recent leadership debate, the three leaders praised each other for their proposals, to the point that the moderator intervened to encourage them to take it up a notch.

The historic number of Green seats also had to do with the personality of the leader. Bevan-Baker, a dentist, scanned less as a crusading tree-hugger than a buttoned-up professional known for his congeniality and steadfastness. He’d worked for the Green Party for many years, finally earning a seat in 2015.

While recent polls suggested they were headed for a big win, the Greens’ expected breakthrough fell short in rural P.E.I.: they won just two seats outside of urban centres. Still, Bevan-Baker said he was thrilled about his party’s eight seats. “I would be lying if I didn’t say there was a tinge of disappointment, but given the huge forward strides that we’ve made, I’m 99 per cent joyous tonight,” he told Maclean’s.

Notably, the Green leader voiced no interest in toppling the government, saying that he’s absolutely ready to work with any other party to provide good government to Prince Edward Islanders and he plans to begin talk about how to do that on Wednesday.

The party’s jubilation was tempered, though, by the tragedy that shook the campaign and sent the province into mourning on Easter weekend. Green party candidate Josh Underhay, 35, and his six-year-old son Oliver died in a canoe accident on Good Friday. (A byelection will be held in Underhay’s constituency within the next three months.)

The shocking loss was the first thing Bevan-Baker brought up when he addressed a crowd of supporters Tuesday night. Some held each other and wiped tears from their eyes, as Bevan-Baker talked about feeling overwhelmed with joy and grief. “My god,” he said, “I love this island.”