The Interview: Philippe Couillard on the future of Quebec

The premier of Quebec on striking while the iron’s hot, curbing Quebec’s overspending and uncovering public servants’ veiled faces 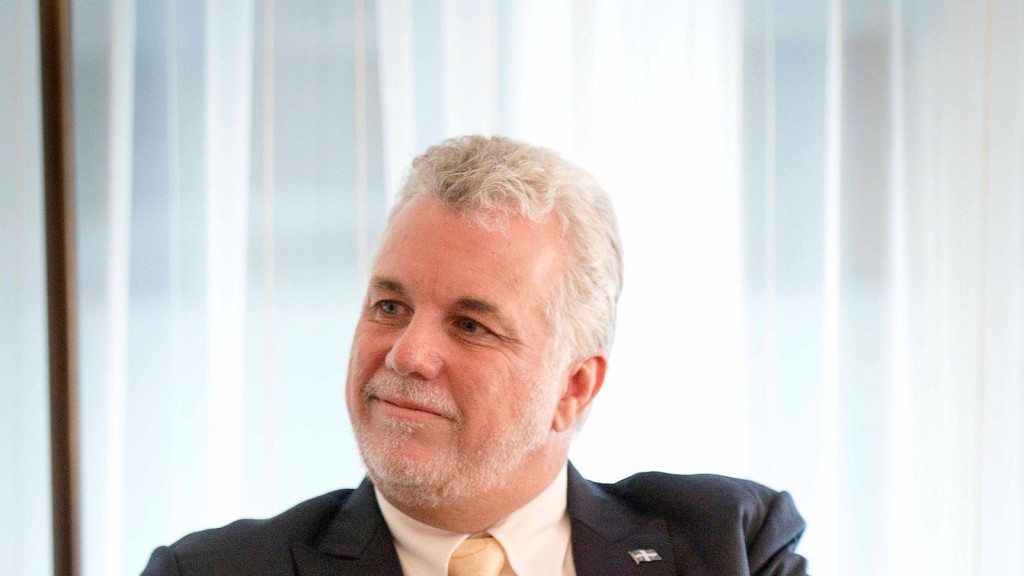 Winning was the easy part. In April, Philippe Couillard led Quebec’s Liberal party to a resounding victory over Pauline Marois and the Parti Québécois, becoming the first neurosurgeon to head a government in Quebec. Almost immediately, Couillard found himself struggling with Quebec’s near-catastrophic public finances, as well as trying to find a place for an assertive, unapologetic federalist at the political table in Ottawa. In his first long interview with an English-Canadian news outlet, Couillard spoke to Maclean’s in his Montreal office.

Q: Do you hope you can sign the Constitution of Canada while you are premier of Quebec?

A: I would like it if it was to happen. I would not put a definite time frame on this because it would put a lot of pressure at the wrong place. Something I don’t want to do, ever, is to put Quebec in a position of weakness. So as I said many times, if for other reasons this type of conversation happens in the country—it could be around the Senate issue, or around First Nations for example—in that case, Quebec would come back to the table, but with its own set of, I think justified, demands.

Q: What is the basis of those demands?

A: It all comes, at the end of the day, to the formal recognition of the specific character of Quebec in Canada. For us it’s also a factor of the success of Canada as a country. Quebec’s distinct character makes Canada an even better country, and vice versa: being in Canada makes Quebec a better place too. Why is it important? Because it was part of the founding agreement of the country, although some people would like to forget that. Two things to say. First, Quebecers are happy in Canada. We are benefiting economically and fiscally from belonging to Canada. We’re proud of being Canadian. It’s a great country. Everybody on Earth envies our Canadian citizenship. And also, these demands, in my view, are part of what a federation should be.

Q: Federalism isn’t just a constitution, it’s a daily practice of intergovernmental relations. How has that practice changed since a federalist government returned in Quebec?

A: Our attitude is certainly very different from our predecessors. I come there, representing Quebec as sitting where it should be, in one of the leadership positions in the country. My goal is to build bridges and alliances with other provinces, particularly Ontario but other provinces too. So it’s an active participation. I don’t like the empty-chair syndrome. I don’t like the sidelining of Quebecers, which was sometimes from their own historic design. Being a front-and-centre, proactive player, and building alliances, are the two elements my colleagues would probably note.

Q: Do you get the impression that Prime Minister Stephen Harper has Quebec’s interests at heart when you talk with him?

A: Yes, I have good relations and good communication with Mr. Harper. And I have always made it clear that I will behave responsibly with any prime minister in office. We’ll see what the next election will bring. But Mr. Harper has been very straightforward. That’s something, certainly, that everyone recognizes. Do we always agree? No. It’s normal that we have disagreements. But I want to keep an open channel of communication to the prime minister of Canada at all times.

Q: Are you and he both conscious of having to demonstrate that you’re able to deliver the goods?

A: Yes, but we’ve done so. Already, the gas tax agreement and we’re working on Building Canada to have an agreement on that. A couple of other files too. We know we have to show that federalism works. But while I say this, I always remind Quebecers: hey, wait a minute—federalism works. If you look at the fiscal arrangements, the economic arrangements, the way the country works, if you compare it to other countries in the world, it’s quite advantageous for Quebec.

Q: There must be a lot of people who, when they hear you say that, say, “Well, Couillard has just given up. This is a guy who doesn’t want anything from Canada.”

A: This is one of the things that has to change in Quebec. I’m as proud and assertive in my Quebec identity as any Quebecer. I believe it’s to Quebec’s advantage to be part of the Canadian federation. But I will be extremely strong and forceful in defending Quebec’s interests within Canada. 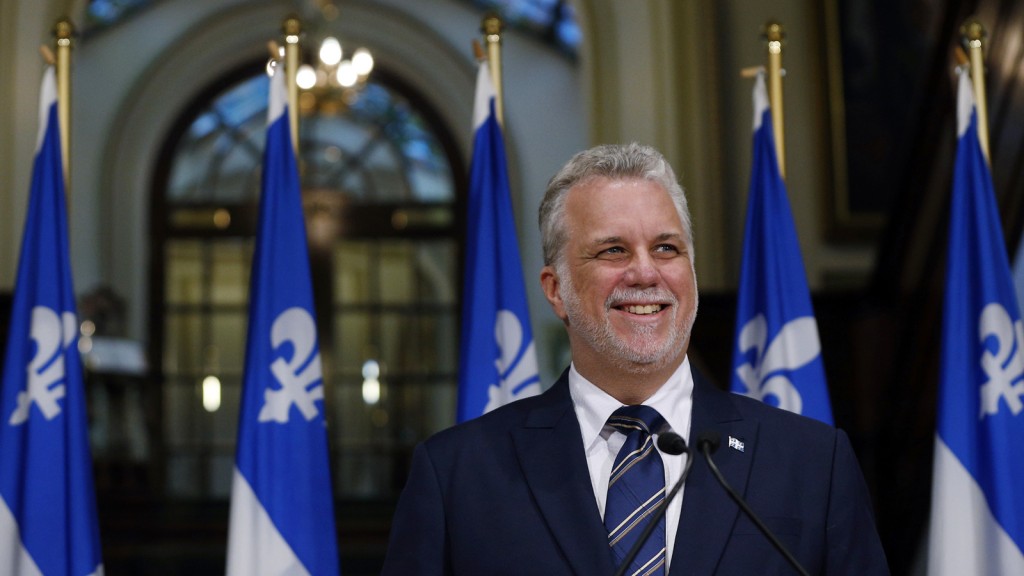 Q: Why has your government moved so quickly to cut program spending?

A: I often repeat three numbers: 20-23-26. Quebec generates only 20 per cent of Canada’s wealth; it represents 23 per cent of the population, but it does 26 per cent of government spending in Canada. That’s incompatible with good financial health over the long term. We’ve fallen into the bad habit in Quebec in recent years of spending more than our revenues allow, and falling back on debt and tax increases to get out. We’ve hit the limit. If we were in Europe, it might be different, but in North America, a debt of 54 per cent of GDP is a lot. We can no longer increase taxes if we want to stay competitive. In the year before the election, a burst of spending made the deficit explode. If we didn’t do anything, we’d have a deficit of $5.8 billion in 2014-15 and $7.2 billion in 2015-16. That’s a lot. We have to act strongly and quickly, even if it’s difficult.

Q: Aren’t you trying to do too much, too quickly, and seeming to be creating chaos?

A: My first term in politics [as Jean Charest’s health minister, 2003-08] and the thinking I did before coming back taught me one thing: you can’t stop a reform in the middle. You do it completely and pretty fast, or you don’t do it. We’re way past changes at the margin, cosmetic changes. We’re shackled. The credit agencies are watching us. We’re borrowing $15 billion on the markets every year. A tiny change in our credit rating will make our problems bigger. We have to redesign the finances of the Quebec state to preserve what counts: education, health and families. When I hear some people say we want to retreat on important programs for Quebecers, it’s the opposite: we want to give ourselves the means to conserve them for future generations. I belong to a generation that had so many choices available. In 1970, when [former premier Robert] Bourassa launched the James Bay development project, nobody in Quebec asked whether we had the means to do it. Today could we launch another James Bay? Imagine the debates we’d have? We were a young, rich society with almost no debt. The generation that comes after us, and which will lead Quebec, must also have choices. And for that, they’ll need financial manoeuvring room.

Q: Why didn’t you discuss increasing daycare fees as income rises during the campaign? Isn’t this the right moment for that discussion?

A: The first reason [to make that change now] is the brutality of the numbers. Our platform called for about $1.3 billion in spending cuts. That’s not nearly enough, given the information we’ve received since we came to government. Our goal isn’t to reduce daycare service—a program the entire world envies—but to make it viable so tomorrow’s families can keep benefiting from it.

Q: The contracts of public service employees come up in March. Should they expect a salary freeze and job losses?

A: On the contrary, it’s a chance to reconsider the role of the public service. There’s how much you pay people, and how many people you pay. Obviously if the payroll increases as fast as it has lately, there’ll be a problem. It’s disheartening if people can’t have a pay raise that covers at least the cost of living. But with the number of employees we have now, it’s hard. Fortunately 15,000 people a year will leave the public service through normal attrition. It’s a golden opportunity to make something happen, to work with the unions on a partnership for reasonable pay raises. Quebec’s financial situation is serious. In terms of intensity, we’re close to matching 1982 and 1997. We won’t do the same things this time, but the problems we face today are about as pressing.

Q: People have the impression that with the PQ’s election loss, the charter of values is a dead letter. But don’t you have your own plan to bring in something comparable?

A: A big mistake in politics is to think that because an issue appears to have been settled, it doesn’t exist anymore. You just sweep it under the rug and pretend it doesn’t exist. Not only in Canada but in other countries where we have to rely on immigration for our growth, the question of coexistence of values in communities is important. It has to be dealt with. The difference between our approach and the PQ’s is: our approach is not discriminatory. What we could not tolerate in their approach was job discrimination being introduced, and defining “neutrality” as forbidding any religious signs, which frankly is something we find totally unacceptable. But we always said that certain principles have to be clarified. One is the question of the face. I think this is a line in the sand for many Quebecers and Canadians: That if you’re going to give services or receive services, your face should be uncovered. That’s about all we’re going to do, and frankly all that needs to be done. The mistake of the PQ, and I think it was by design, was to go too far. Using this as a wedge issue, trying to revive a very ethnic brand of nationalism in Quebec. At the end of the day, it’s great news for Quebec that it didn’t work in their favour.