The Liberals have a slight edge heading into Election Day 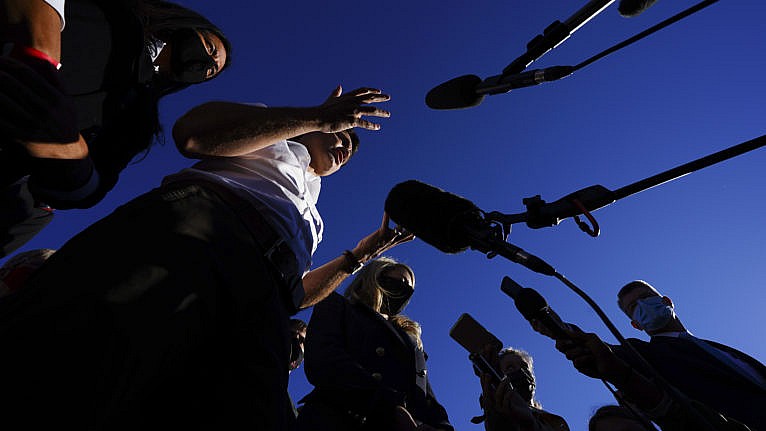 Maclean’s polling analyst Philippe J. Fournier was up late last night putting the last public opinion polls of this election into his model, and he concludes the Liberals are likely, but not sure, to eke out a victory today.

So here is where we stand with less than 24 hours to voting day. As of this writing, on Sunday evening, it appears the Liberal Party and Justin Trudeau are the odds-on favourite to win the most seats in Canada, although the gap between the two leading parties remains narrow. Several important variables remain unknown, and while there appears to be a consensus on national voting intentions, regional numbers—crucial for seat projections—differ from polling firm to polling firm.

The 338Canada federal model grants the LPC at least a plurality of seats in 68 per cent of simulations, against 31 per cent for the Conservatives. We are far from a clear result here. In fact, we could use the analogy of a dice roll: One to three, the Liberals win a minority; Four, the Liberals climb to a majority; Five or six, and it is the Conservatives who win the most seats. Hence, while one prefers to be the favourite heading to election day, two out of three chances of winning is far from a sure win for the Liberals. By way of comparison, according to some sports betting sites, the Las Vegas Golden Knights had two out of three chances of beating the Montreal Canadiens in the semi-finals of the Stanley Cup last June. And we know how that turned out.

That wraps up the polling for this election. Today it is up to voters.

Closing arguments: Justin Trudeau ended the election by campaigning against Jason Kenney and Scott Moe on Sunday, the Globe reports.

“Folks in Alberta have a really important choice to make, whether they want Erin O’Toole to continue working with Jason Kenney on not ending this pandemic, or do they want a Liberal government that is going to stand up for the almost 75 or 80 per cent of Canadians, including a vast majority of Albertans, who have done the right thing and want to be done with this pandemic for good.”

O’Toole alluded to his military career as he called for supporters to triumph in the ground game:  “When you have a mission to accomplish, when you need to bring a team together to accomplish that mission, you need a plan for the mission, and we’ve got the plan in Canada’s recovery plan.”

Jagmeet Singh, upbeat in B.C., said the he was “stoked,” and promised to fight. “We are going to fight for you. That’s what we do.”

Billionaires warned: In a news conference on Sunday, the Star reports, Jagmeet Singh would not rule out supporting either a Liberal or Conservative minority, but did indicate what his key demand would be: taxing the rich.

“It should be really clear: the question of who pays the price in this pandemic. It should not be you or your families, it should not be working class people, it shouldn’t be middle class people. It should be the billionaires,” Singh said. “So our number one priority is making sure that the billionaires pay their fair share, so we can invest in all the solutions that we need to make sure people’s lives are better.”

Key issues: The Association of Canadian Studies has an interesting Leger poll concluding that the Liberal effort to make the election a referendum on the pandemic was only partly successful—fewer voters (40 per cent) considered pandemic management a vote-moving issue at the end of the campaign than did (48 per cent) at the beginning. Other key issues: child care, the environment, Afghanistan and guns. CP has the story.

Not going away: One of the key stories of this election, and one of the questions to be answered today, is how many votes does Maxime Bernier’s People’s Party get? Regardless of the vote count, Bernier has given a megaphone to an angry group of  “pandemic libertarians,” writes Jamie Watt in the Star.

These malcontents have reached a critical mass that is angrier, louder and less encumbered by the bounds of logic or decency than any political presence in our country since the mid-twentieth century. And much like the followers of Donald Trump in the U.S., they are not going away anytime soon.

Your correspondent also has a column on Bernier, who, it looks like, is about to deliver a cold dish of revenge to the Conservatives who denied him the leadership of their party back in 2017.

Good questions: In the Star, Althia Raj writes that Erin O’Toole concludes the election campaign with a great number of unanswered questions, about guns, child care money for Quebec and how many of his candidates are unvaccinated.

Hurtin’ Kenney: A senior UCP member has called for an emergency meeting to discuss an early leadership review of Jason Kenney, the Calgary Herald reports.

Making sense of it all: Join Paul Wells and Shannon Proudfoot at 12:30 ET today for a Twitter Space. They will host a special Election Day chat with guests Catherine McKenna, Jason Lietaer and Anne McGrath.

Where to get your news: Follow the election results with our live election map results page at Macleans.ca.

And if you want a more relaxed way to watch the results, we’re reprising (by popular demand) our live election map colouring feed. Plus watch for our complete coverage and analysis of all the results from Paul Wells, Shannon Proudfoot, Marie-Danielle Smith, Jason Markusoff, Justin Lin, Fatima Syed, your correspondent and more!