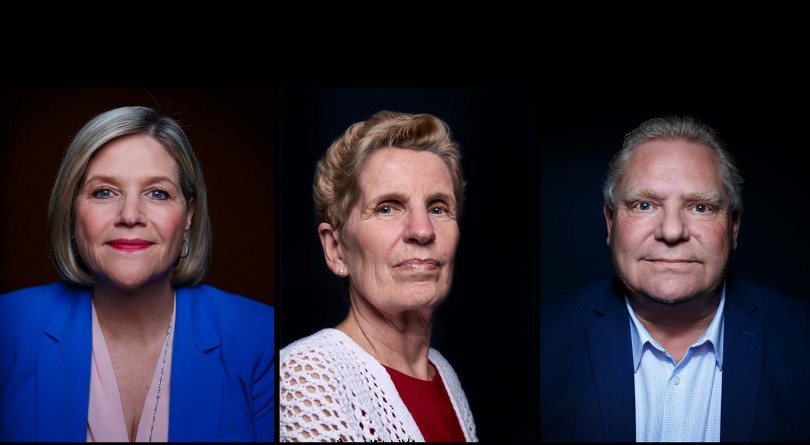 With only four days until the Ontario provincial election, the province’s New Democrats and Progressive Conservatives are neck-and-neck in a new poll.

The Pollara Strategic Insights poll of 1,447 eligible voters, conducted May 30 through June 2 with a combination of live telephone interviews and an online panel survey, shows Doug Ford’s Conservatives and Andrea Horwath’s NDP tied at 37 per cent of support from decided voters. Kathleen Wynne’s Liberals were far behind at 20 per cent. Most of the polling was done before Wynne made her surprising announcement on Saturday morning that she does not expect to be premier after Thursday’s election.

“In most regions, the Liberals are not in the game at all,” Don Guy, Pollara’s Chief Strategy Officer, told Maclean’s. But in at least one way the Liberals have been having an influence, and it has been to the NDP’s detriment.

(In the campaign’s home stretch, Pollara has moved to a mixed telephone and online panel survey method from its original methodology which drew entirely on results from an online panel. This is the first published poll result using the new mixed methodology.)

READ: A guide to where the parties stand on everything from hydro bills to taxes to transit

What remains to be seen is whether perceptions of leaders will decide this race. This is hardly guaranteed. After rising rapidly in the early days of the campaign, and seeming to spike in the immediate aftermath of the last debate, NDP support now seems stuck at 37 per cent. After sinking in the early part of the campaign, PC support appears to be more stable — at the same 37 per cent.

In Ontario’s regions, the race is moving quickly, in ways that should not encourage the NDP. In Southwestern Ontario, Pollara measured a 12-point lead for the NDP on May 31; by Saturday it had shrunk to three points. In Central Ontario — the region around Barrie, Peterborough and Parry Sound — the PCs have closed a 15-point gap in the same few days. The NDP has Northern Ontario nailed down, and in Eastern Ontario both the NDP and the Liberals gained in recent days to cut into, but not erase, a PC lead.

This document features the first wave of results of Pollara Strategic Insight’s final week tracking survey for the Ontario election, which involves daily polling updates based on the most recent four days of mixed-mode survey interviewing.
This is the first update, based upon a mixed-mode sample of N=1,447 adult Ontarians who self-identified as eligible to vote in the Ontario election. The survey was conducted from May 30 to June 2, 2018. Of the 1,447 surveys conducted:

Because the sample for this survey included both probability (telephone) and non-probability (online) samples, a margin of error cannot be applied to it. The online sample is not probability-based because respondents self-selected for participation in a verified research panel. Sample surveys and polls of all types may be subject to multiple sources of error, including, but not limited to sampling error, coverage error, and measurement error. If the entire N=1,447 sample were conducted among a probability sample, it would carry a margin of error of ± 2.6 per cent, 19 times out of 20.

The data are statistically weighted to ensure the regional composition province-wide and within regions to ensure age and gender composition reflects that of the Ontario adult eligible population using information from the 2016 Census and accounting for older Ontarians’ increased propensity to vote based on an analysis of Ontario’s election performance relative to federal elections. Based on Pollara’s analysis, the composition of the electorate over the age of 55 would range between 43 and 48 per cent.