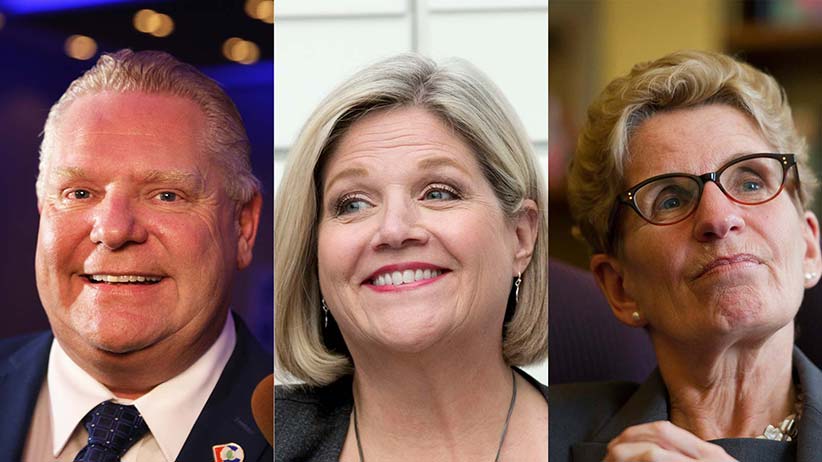 On the eve of the official kick-off of the Ontario provincial election, Kathleen Wynne’s governing Liberals have fallen to third place and the second-place NDP has considerable room to grow, according to a shocking new poll.

The online poll of 1,010 eligible voters, conducted on May 3 and 4 for Maclean’s by Pollara Strategic Insights, shows that support for the Liberals has declined since other recent public polls. Among decided voters, the Progressive Conservatives led by Doug Ford enjoy a strong lead with 40 per cent support. The NDP led by Andrea Horwath is in second place with 30 per cent. That leaves Wynne’s Liberals way back with 23 per cent. 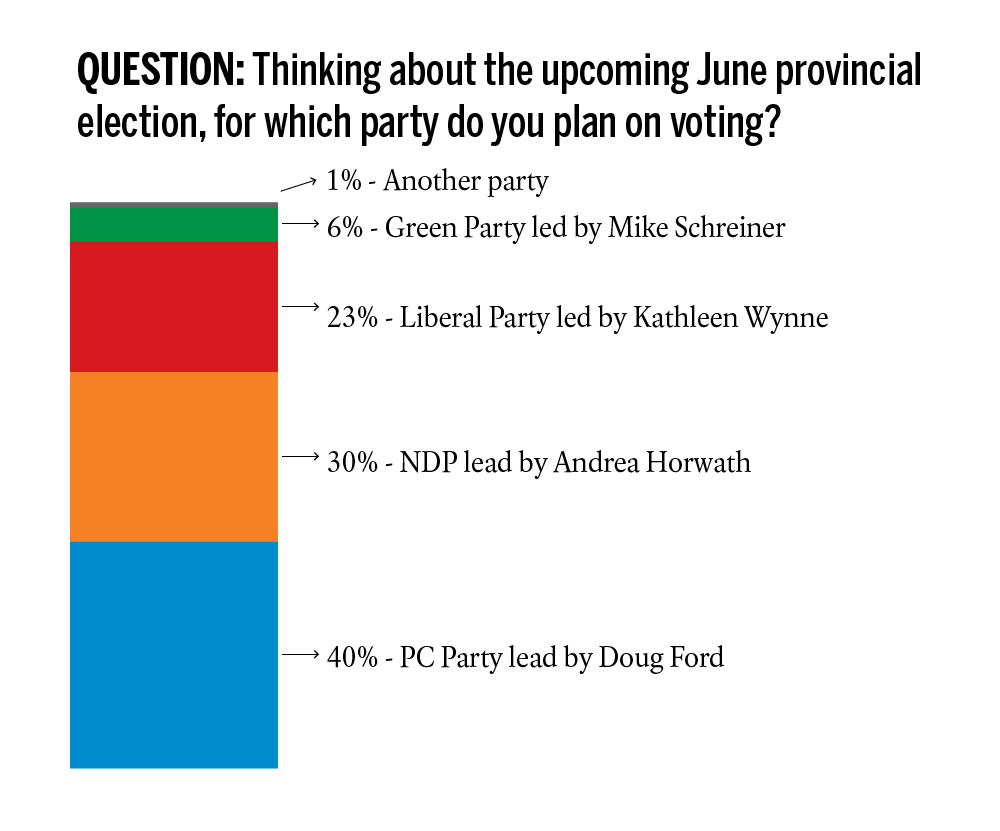 The campaign is moving into a more intense and unpredictable phase. The first televised leaders’ debate is Monday night on CITY, followed by the dissolution of the legislature and the formal campaign launch on Wednesday. “This campaign’s going to matter,” Don Guy, the owner and chief strategy officer of Pollara, told Maclean’s. But his results show further room for the Liberals to fall and for the NDP to climb. Strong support as respondents’ second choice suggests Horwath’s NDP “has a lot of room to grow,” Guy said, whereas Wynne and the Liberals “aren’t even close to bottom yet.”

WATCH: What issues are on Toronto’s radar for the Ontario election?

Asked their second choice for party preference, 33 per cent named the NDP. The provincial Green party, led by Mike Schreiner, was second with 16 per cent naming it as their second choice. The Liberals and Progressive Conservatives were each mentioned by only 11 per cent. Second-choice support often doesn’t translate into votes, but it’s considered a good way to see which parties might gain support if at some point voters become disillusioned by the party they originally supported. 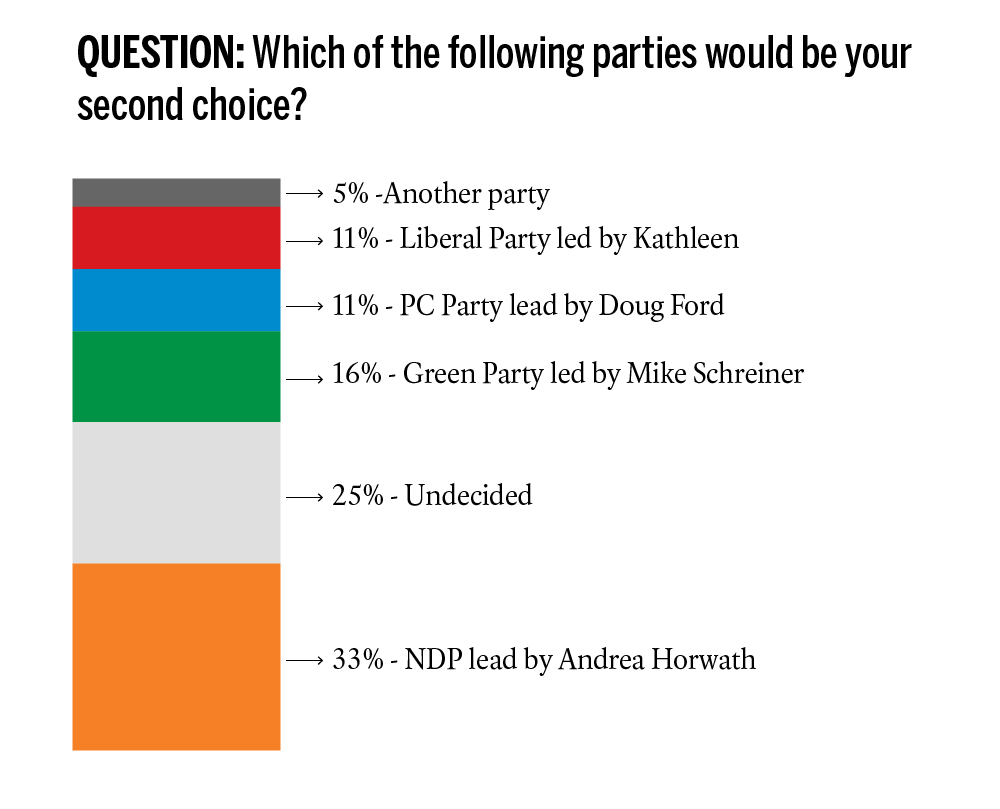 MORE: See where the three parties stand on all the big issues

But then Pollara took one more step in testing support. Liberal supporters who want to block Ford were asked: “And, during the campaign, if it looked like Andrea Horwath and the NDP had the best chance of stopping Doug Ford and the PCs from winning the election, how likely are you to switch your vote to Andrea Horwath and the NDP?” Fully 78 per cent of those Liberal supporters who are motivated by a desire to stop Ford said they’d probably switch their vote to the NDP in such a scenario, against only 22 per cent who said they probably wouldn’t.

Pollara tested other parties’ support in the same way and found that neither Conservative nor NDP supporters are as likely to switch their vote if another leader starts to look like better insurance against an undesirable outcome. For instance, only 60 per cent of current NDP supporters who are motivated by their desire to stop Ford say they’d probably switch to the Liberals should Wynne look like the best leader for that task, compared to 40 per cent who probably wouldn’t. Overall, this suggests Liberal support, already low, is also the softest among the three main parties. 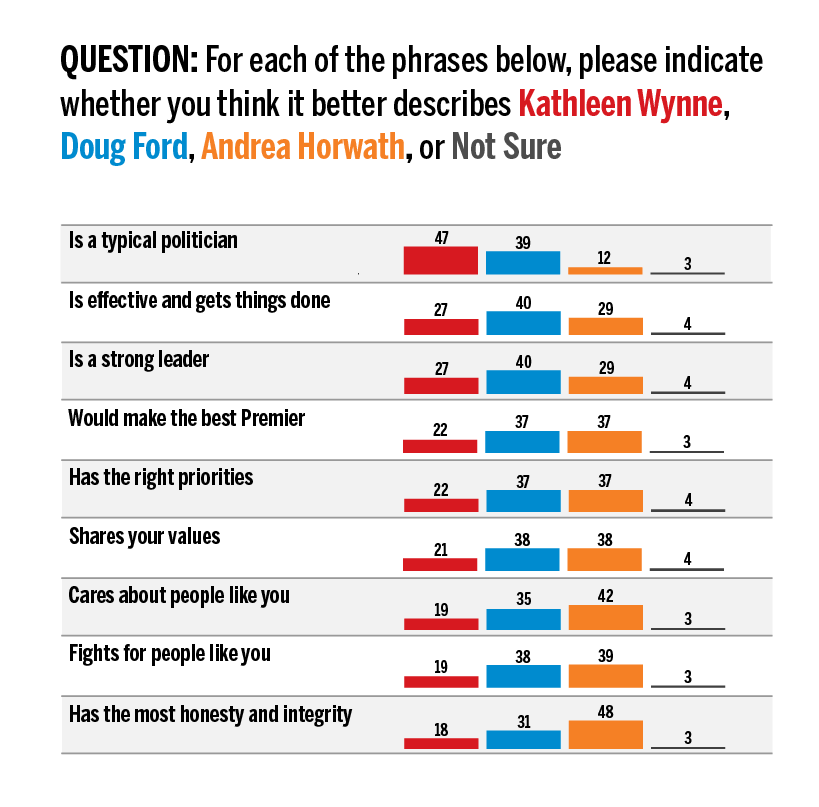 Respondents were asked whether they have positive or negative impressions of each leader. Horwath’s average score was 5.9 on a scale from 1 to 10. Ford’s was 4.2 and Wynne’s was 2.9. Pollara also asked questions about the federal Liberals to see whether Wynne’s difficulties are part of a general antipathy toward the Liberal brand, but the results suggest otherwise. Respondents gave Prime Minister Justin Trudeau an average score of 4.9, ahead of Ford and Wynne but behind Horwath.

Respondents were given a list of phrases that might apply to any of the leaders, and asked which leader is best described by each phrase. They were much likelier to say Wynne “is a typical politician,” by 47 per cent to 39 per cent for Ford and 12 per cent for Horwath. Ford was well ahead of the others on “is effective and gets things done” and “is a strong leader” (40 per cent on both, to less than 30 per cent for the other two leaders). But Horwath tied Ford on “would make the best Premier,” “has the right priorities” and “shares your values.” Horwath has a clear lead over both Ford and Wynne as the leader who “has the most honesty and integrity.”

On issues, respondents were likeliest to name Horwath when asked which leader could best handle education, child care, health care, the environment, housing and poverty. Ford was considered the best leader on jobs and the economy, taxes and electricity. Horwath and Ford were roughly tied on “making life more affordable.” Wynne was in second place on child care — and third on every other issue. 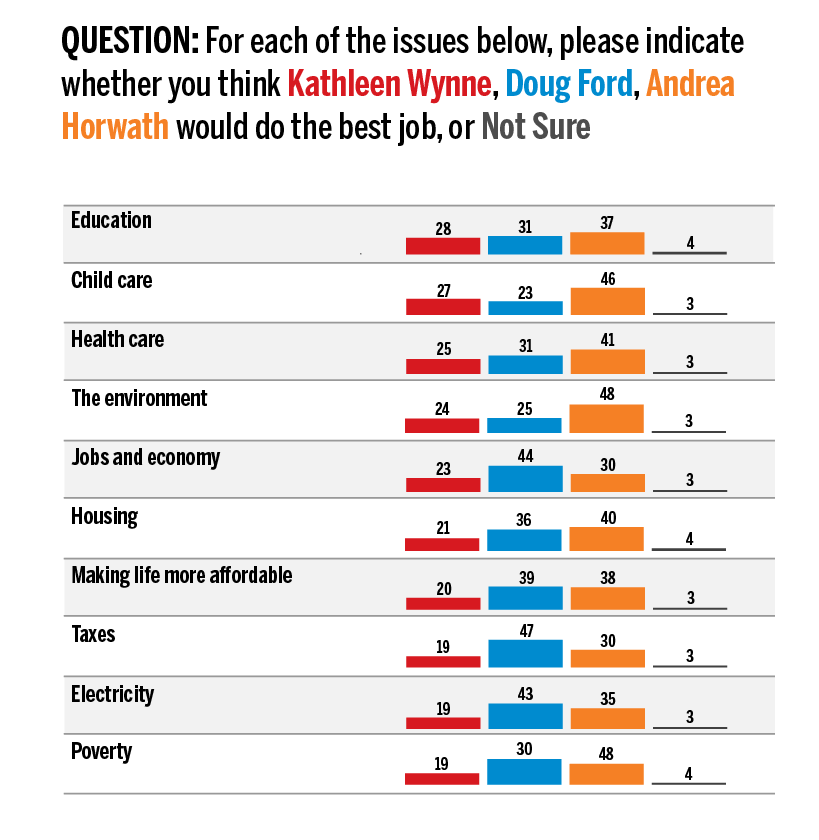 Don Guy, who succeeded Michael Marzolini as owner of Pollara last year and who was a chief of staff to former Ontario premier Dalton McGuinty a decade ago, said the poll results are “pretty tough, if you’re a Liberal.”

Guy had advice for each of the parties and their leaders:

“The good news is that the start of campaigns almost always hits a reset button for many voters, who open back up to information from all three parties on a more-or-less equal footing, regardless of their stated voting intentions. The Liberals need this because their many initiatives and messages are not getting through, and even their diminished vote is soft.  They need to give people a positive reason for voting Liberal. And they need to have a very good week with a strong, single message that can enable Wynne to reconnect again as a happy warrior.  Education is her best issue relative to Ford and Horwath and a sharp differentiation on that issue could work well.”

“Keep doing what you are doing, driving the message on affordability and change and building the enthusiasm gap between you and the other parties. The PC vote is by far the most solid.  Don’t get knocked off.  Dumping Tanya Granic Allen [a former leadership candidate whom Ford dismissed on Saturday as a candidate for the legislature after her past homophobic remarks came to light] immediately was a good example of how they should be doing things. Run a strong advance poll effort to get the most enthusiastic voters out early. It lets you put those votes in the bank in case anything changes and then lets you focus your election day GOTV [get-out-the-vote efforts] on harder-to-gets.”

“There is vote to solidify and momentum to build on. Look to feature your leader more and shape a message of change around themes like transparency, honesty and accountability, focusing on the issues that you are over-performing on relative to your current vote support. Your leader is still the least well-known, and you will benefit as people get to know her against this backdrop.”

Today’s poll marks the beginning of a collaboration between Pollara and Maclean’s that will extend throughout the Ontario campaign. Pollara will seek to measure voter support for each party but also to help understand the reasons behind that support and any shifts in voter allegiance as the campaign progresses.

Pollara Strategic Insights conducted a 10-minute online survey of 1,010 Ontarians who self-identified as eligible to vote in Ontario Elections from May 3 to 4, 2018. Because the sample is based on those who initially self-selected for participation in the panel rather than a probability sample, no estimates of sampling error can be calculated. All sample surveys and polls may be subject to multiple sources of error, including, but not limited to sampling error, coverage error, and measurement error. A probability sample of equivalent size would have a margin of error of plus or minus 3.1 per cent.

The data are statistically weighted to ensure the sample’s regional, age and gender composition reflects that of the Ontario adult 18+ population and accounting for the increased propensity to vote with age.

Results are expressed as percentages unless otherwise noted. Results may not add to 100% due to rounding or multiple responses.