Anne Kingston: Maclean's contacted the Canadian government and political party leaders to request statements on the U.S. incarceration of children. Answers ranged from indignation to silence. 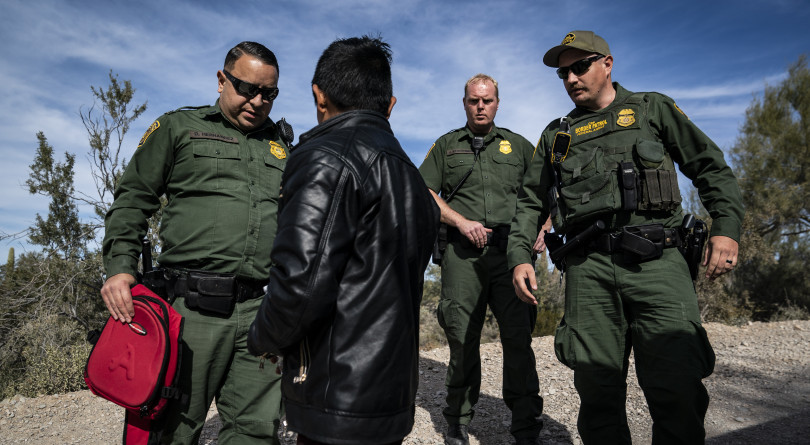 Updated June 27: This post has been amended to include a response from the NDP.

For more than a year, it has been public knowledge that the United States is separating thousands of immigrant babies and children from their parents and caging them in detention centres under inhumane conditions: traumatized children sleep on concrete floors under foil blankets and glaring florescent lights that never dim. In February, the New York Times reported that the U.S. Department of Justice received 4,500 complaints in four years about the sexual abuse of immigrant children held at government-funded detention facilities, including an increase in complaints under the Trump administration’s policy of separating migrant families. Six children are known to have died in custody, though it could be more; the U.S. government is not reporting the deaths. The government has confirmed it has lost track of thousands of children who will never be reunited with their parents. The mistreatment, in violation of the Flores settlement, which mandates that children must be held in safe and sanitary conditions and moved out of Border Patrol custody without unnecessary delays, ignited global outrage and condemnation from public figures, including Pope Francis.

The past week saw a renewed focus on the situation, with lawyers and doctors who visited overcrowded, unsanitary Texas detention centres reporting flu and lice outbreaks going untreated, children left filthy and uncared for, and taking care of one another because of the lack of attention from guards. The New Yorker  published a devastating glimpse inside the centres, referred to by one doctor as “torture facilities.” Public outrage was further stoked by a video of U.S. Department of Justice lawyer, Sarah Fabian, attempting to argue in court that soap, blankets, toothbrushes and beds are not necessities for detained children. This week, under pressure, the U.S. government moved hundreds of children, only to move some back. On Tuesday, a heart-breaking photograph of a man and his young daughter who died attempting to reach the United States went viral. It was reminiscent of the image of three-year-old drowned Syrian Alan Kurdi laying on a beach that galvanized politicians and the public in September 2015.

On Monday, a day before the photograph’s release, Maclean’s contacted the Canadian government and political party leaders to request statements on the incarceration of children at the southern U.S. border. The responses were mixed, and raise questions about Canada’s ongoing relationship with the United States that embraces it as a “safe country” for asylum seekers.

Detention of migrant children was not discussed when Prime Minister Trudeau and President Trump met at the White House last week, PMO spokesperson Eleanore Catenaro told Maclean’s via email. Their conversation included the ratification of NAFTA, expanded trade between the countries, rising tensions between the U.S. and Iran, opioid-related deaths and the detention of two Canadian citizens by the Chinese government.

Catenaro provided quotes from the Prime Minister on the topic of migrant children, all dating to June 20, 2018, days after U.S. Homeland Security announced that nearly 2,000 children had been incarcerated between April and May. That day, in the House of Commons, NDP MPs Guy Caron and Jenny Kwan pressed Trudeau as to why Canada continued to see the U.S. as a “safe country,” as defined in the Safe Third Country Agreement (STCA), a pact between Canada and the U.S. dating to 2004 which requires migrants to claim asylum in the first safe country in which they arrive; if someone makes a claim in the U.S., they would not be allowed to make one in Canada. “A safe third country means that the country with which we signed an agreement is a place where asylum seekers are treated fairly, humanely, and decently,” Caron said, asking Trudeau “if he is prepared to say that that situation is unacceptable, will he now say that the country that is treating people that way is no longer a safe third country for refugees?”

Trudeau, who days earlier had said he wouldn’t “play politics” on U.S. migrant children’s safety, called the situation “unacceptable,” and said the government is “monitoring the situation very closely.” He said: “We will continue to work with the Americans on border protection and the agreements we have with them, while protecting our values and the way we do things in Canada. We will be loud and clear about that. We obviously do not do things the same way.”

Kwan, the party’s critic for immigration, refugees and citizenship, pointed out that Trump had closed the door to those fleeing gang violence and domestic violence, yet many fleeing from Central America cite gang violence as the main reason to seek asylum. Trump’s policy is in violation of the UN convention for gender-related persecution, she said, again asking the PM if he would “show the moral leadership by suspending the safe third country agreement?”

Trudeau reiterated that “what is happening in the United States is wrong,” adding: “I cannot imagine what these families are going through. As I have said many times, the safe third country agreement is over 10 years old. We will continually look for ways to modernize it and be in conversation with the Americans on this. We will continue as well to closely monitor developments in the United States.” Trudeau echoed his statements when questioned by reporters in a scrum that day. (Maclean’s question to the PMO regarding how Canada was “monitoring” the situation was not answered.)

Green Party Leader Elizabeth May, a former immigration lawyer who has been a critic of Canada remaining in the STCA, called the incarceration of children “an outrageous act of cruelty” in a telephone interview with Maclean’s. “It is unbelievable this could be happening,” she says, adding the treatment of migrant children runs contrary to the words etched on the Statue of Liberty pedestal. “We cannot continue to see the United States as a ‘safe third country’,” she says.

READ MORE: Trump’s crew wants to declare Mexico a safe third country. That could be a death sentence for refugees

May, who has written frequently on the topic, also referred to the closing of a loophole in the STCA tucked in the 382-page 2019 omnibus budget bill that introduces new grounds of ineligibility for refugee protection as “unconscionable.” The measures would also expand the list of safe countries to bar people from making asylum claims here if they’d already made claims in the U.K., Australia, New Zealand or the U.S. (the U.S. is officially the only ‘safe’ country Canada recognizes now). “Canada is onside with ‘Fortress America’,” May says, while allowing that the situation is complex politically given Canada’s trading relationship with the U.S. and its recent reliance on Trump regarding the freeing of Canadians imprisoned in the country. (Canada’s own long, grievous practice of separating Indigenous children from their parents, even today, and the fact Indigenous children are known to lack access to clean drinking water among other necessities of life, also makes it difficult for politicians to criticize another country for doing the same.)

Neither the NDP nor Conservative Party immediately responded to Maclean’s inquiry (this post will be updated if and when they do). Last year, NDP leader Jagmeet Singh called the detention of children at the border “heinous.” He called for the government to suspend the STCA, noting that the U.S. has made it “absolutely clear” the country is no longer safe for asylum seekers under the Trump administration. “To separate kids from their parents is an act that is so deplorable and so inhumane, it speaks to a complete corruption in morality of this administration,” he said. “It is just so heinous.” Singh also criticized Trudeau for taking too long and being too timid in his response. On Thursday, Mélanie Richer, the NDP’s director of communications and media, contacted Maclean’s to provide the party’s current position on the internment of children at the U.S. border: “We think it’s abhorrent and that we should suspend the STCA with the U.S.” She points to the party’s commitments document, “A New Deal for People,” which states that an NDP government would suspend the STCA with the United States, thus “allowing people to make asylum claims at official border crossings.”

The shocking image of the drowned asylum-seeking father and daughter, who likely would have been separated at the border, has summoned outrage, with protest marches being organized in Toronto. (Canadians also marched in protest last year.) The galvanizing image of Alan Kurdi was weaponized politically, appearing as it did during a federal election campaign and after it became known the Conservative government had denied the Kurdi family’s application for asylum. This new image might appear to have no direct political currency in Canada, but it does. That makes any political response, or lack of it, to the institutionalized abuse of children at the U.S. border all the more telling.