The North and the great Canadian lie

Canada is not a proud northern nation. Its Arctic is undefended, undeveloped and socially fraught. 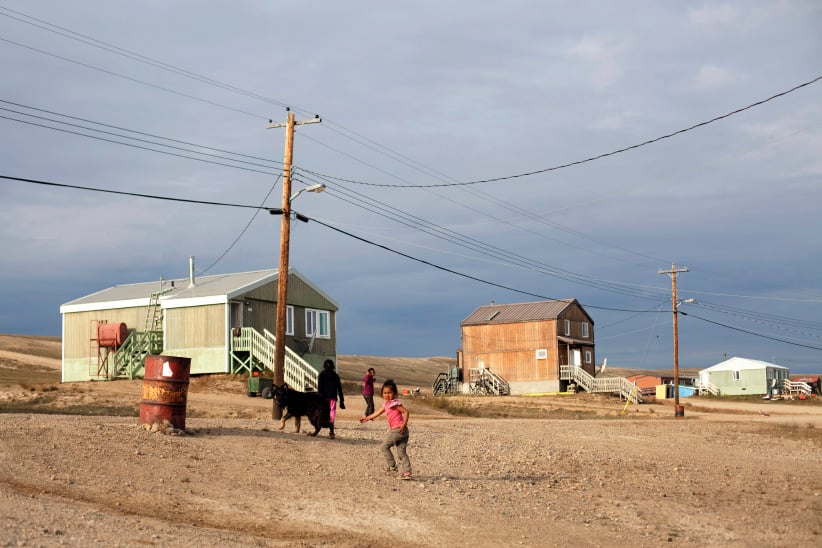 Main Street of the hamlet of Sachs Harbour on Banks Island in the Northwest Territories. (Erika Larsen/Redux)

We are not a northern nation, and we need to stop lying to ourselves that we are.

More people live in Moose Jaw than live in the Yukon. Compared to other Arctic regions, Canada has done so little to develop its northern economy that it is now rivalled by the tiny Faroe Islands. There’s still no four-season road to our Arctic shores. The only railroad is falling apart. There’s no longer a port, and it’s easier to fly to Africa than it is to Nunavut.

Canada needs to stop pretending that it cares about the North. Decades of false rhetoric has created expectations among those few who do live up North that someone “has their back.” No one does. They’re on their own and they have been for generations. We tell the world the North is ours, that we are protecting our sovereignty and our vast mineral wealth. But the truth is we aren’t, and those resources are so far from the nearest railhead they may as well be on the moon.

It is often remarked that 90 per cent of Canadians live within a short drive of the U.S. border. But that fact doesn’t properly illustrate how far we are from the North. Regina is on a more southerly latitude than Amsterdam. Montreal is south of Venice. Toronto, transposed to the Mediterranean shores, would sit near Monaco.

Of course, no one would suggest the Milanese can teach Calgarians how to manage a blizzard. But it helps illustrate the undeniable truth that while the atlas claims our nation stretches 5,000 km from Niagara to the North Pole, our true country, the land on which Canadians actually live, where we work and invest, and the land we defend, remains a thin strip of territory pushed as far south as we can get. 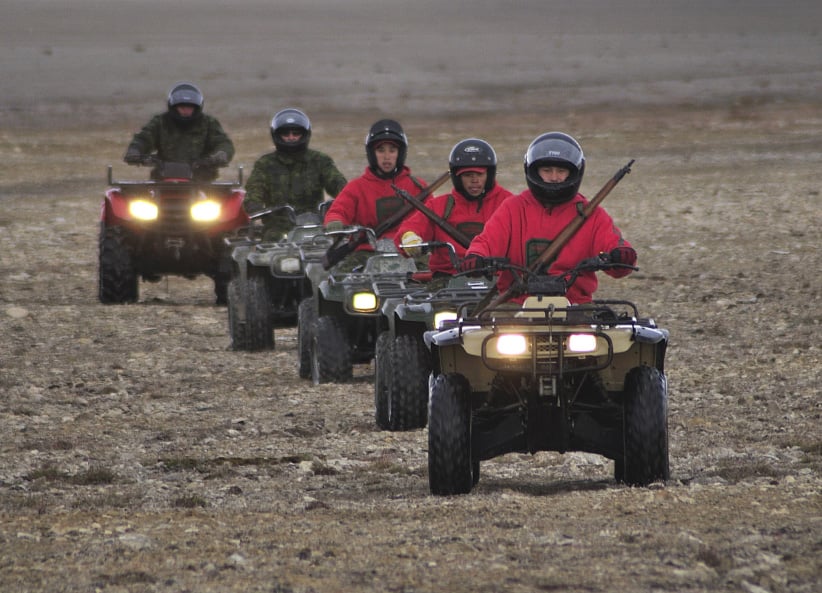 The North, where the Canadian Rangers supply their own vehicals. (Photo by John Miles / Rex Features)

How many Canadians actually live up north? Approximately 118,000. That’s one-third of one per cent of the national population. To put it another way, about as many Canadians live in Australia as live in Nunavut. If the entire population of the Northwest Territories decided to attend an Edmonton Eskimos game, Commonwealth Stadium would still have 10,000 empty seats.

Not only do we not live in the North, we don’t visit either. A study commissioned by the Churchill Northern Studies Centre in 2011 found that only 14 per cent of Canadians had travelled to Canada’s North even once.

This should be no surprise. It is cheaper and easier (and usually faster) to travel almost anywhere overseas than it is to visit the Canadian Arctic. There is only one train to the North, travelling on tracks so old and so worn out, it can only manage an average speed of 28 km/h on its way to Churchill.

Seventy-four years after the completion of the U.S.-built Alaska Highway, there is still no four-season road to Canada’s northern shores (just promises there will be soon). You can’t sail either. Our only northern port, in Churchill, closed last month. Which leaves flying. But flights are few, and ridiculously expensive. Want to travel from Toronto to Iqaluit next week? $3,087. Khartoum? $1,500. Bangkok? $1,000.

The sheer difficulty of getting there helps partially explain why the Canadian North is so completely undeveloped. If you define this region as including the Yukon, Northwest Territories, Nunavut, the shores of Hudson Bay, northern Quebec and Labrador, it contributes about $10 billion to the national GDP, or about one-third of one per cent.

By comparison, the Arctic regions of Norway, Sweden and Finland are each 1/30th the size of Canada’s, yet each of their northern economies are triple the size our ours. In fact, according to data collected by the Finnish economist Ilmo Mäenpää, the Canadian Arctic makes up approximately one-quarter of the circumpolar region, yet our economic production there accounts for less than two per cent of that entire region’s aggregate economy.

Unlike Russia, Greenland, Iceland and all other northern regions, there is no fishing industry (no ports for trawlers, no transportation to markets). The same lack of infrastructure means there is no resource processing like you find elsewhere in the circumpolar world. Which leaves only some mining to prop up Canada’s tiny northern economy.

There has been a great deal of talk (down south) about the mineral wealth of the Arctic. But without a means to transport ore to markets, those fabled deposits are literally worthless. Bay Street agrees. This year Canadian mining companies will spend only $250 million on mineral exploration in Nunavut, Yukon and the Northwest Territories combined. That is $100 million less than what is being spent in Ontario alone. Unfortunately, the Conference Board predicts that even the small amount of northern mining that exists will begin to decline by 2020.

Some towns have a thriving tourism industry for mostly international tourists (Canadians go to Florida). And thank goodness, because the recent Arctic Human Development Report found a third of Aboriginal Canadians sell arts and crafts to supplement their income. That’s how undeveloped our northern economy is. Soapstone souvenirs are actually an important industry.

Canada has also left its north largely undefended. Not long ago a senior Canadian general admitted that the Army had “lost the ability to operate up North.” We have only three military bases in the Arctic, and there are approximately 120 personnel stationed there year round. That’s almost enough people to fill a half a TGI Fridays. They are there, as the Canadian government describes, to provide “surveillance and control of Canadian territory and approaches.” In an area the size of the European Union, that is one soldier for every 32,000 sq. km.

The Royal Canadian Navy currently has no ice-strengthened warships (Denmark has seven), and its closest naval base is in Halifax, a week’s sail from the Northwest Passage. The Canadian Coast Guard has only eight icebreakers capable of operating in the Arctic, but only in the summer and fall and not in thick ice. For most of the year, marine traffic is monitored from Prescott, Ont., 4,000 km from Tuktoyaktuk. This week it was revealed that the Navy’s only Arctic research vessel is being decommissioned.

Usually, whenever anyone points out the total absence of Canadian Forces in the Arctic, someone mentions the Canadian Rangers. This volunteer militia is made up mostly of Indigenous Canadians living in the North. They are the backbone of our military presence, providing surveillance and conducting “sovereignty patrols.” To complete this mission they are issued a sweatshirt, a baseball cap, and a Second World War-era rifle. (This week they were promised, again, that these would all be replaced by 2019.) Rangers must supply their own snowmobiles and radios. They may be hardy, but they’re no replacement for an actual military presence.

Canada’s North is empty. We stopped trying to develop it generations ago. Earlier generations dreamed of opening up the vast expanses of our Arctic frontiers. The entire reason they pushed our borders north over Hudson Bay, beyond Baffin Island, right to the North Pole itself is because they expected future Canadians to do something with it. And we can. The minerals are there, they just need infrastructure investments to make them valuable. As climate change opens up the Northwest Passage, Canada could develop shipping and perhaps a commercial fishing industry. If Canada doesn’t take advantage of that opportunity, other nations will.

But at some point we gave up on these aspirations. We sat back down on our chesterfields, and said: “This is good enough.”

Maybe that’s true. Canada is objectively one of the wealthiest, healthiest, most successful nations on the planet. Maybe it doesn’t need the North.

But we need to stop pretending that the North is ours and that it defines us. We need to ignore the empty rhetoric of prime minister after prime minister telling us the Arctic is important while doing nothing to prove it. We need to ask ourselves, do we really want to be a northern nation?

The last government talked about geo-mapping, a few million dollars for research funds, and naval ports that were never built. This government is promising “a polar communications and weather project,” new rifles, and maybe one day some new patrol ships. But these aren’t even fig leaves. Every single other Arctic nation has been doing much more for generations. Making Canada a true northern nation will require real expenditures, hard tradeoffs, and difficult work. But, the question is, do we even want to?

Disclosure: Scott Gilmore is married to the federal minister of the environment