The outsized meaning of the Frontier oil sands mine

The project is a long shot to get built, while others are already approved. How did it become a flashpoint in the climate-change battle? 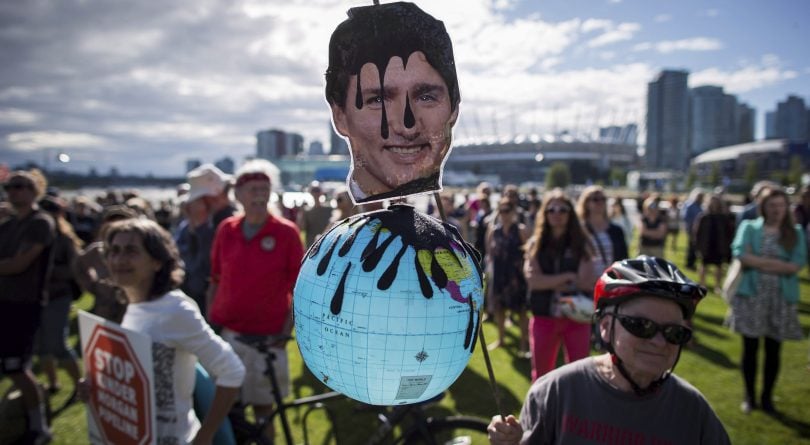 Protestors hold up a likeness of Prime Minister Justin Trudeau during a 2018 demonstration in Vancouver against the Trans Mountain Pipeline expansion. The Trudeau government is on the hot seat again as Teck Resources awaits cabinet approval of its Frontier oil sands development. (Darryl Dyck/CP)

Albertans had barely read aloud to their children every last gratifying paragraph of last week’s court decision clearing the path for the Trans Mountain pipeline expansion’s when the temperature of the latest existential threat to the petro-province reached fever levels.

Of course, the other side of the debate over Teck Resources’ Frontier oil sands mine also adopts existential tones, about the environmental toll of yet more federally sanctioned bitumen extraction in a warming world—and in a country trying to sound credible about reaching net-zero emissions in 30 years.

Finally, after more than a decade of intense focus on the steel tubes that carry the bitumen to the B.C. Lower Mainland, Quebec or other places whose populaces can get spooked by the fairly remote risk of a catastrophic spill, the proxy war over Alberta’s oil sands has ended. The fight has shifted back to its grimy wellspring in northeastern Alberta, which the pipeline debate was always really about for environmentalists, not to mention a long line of Alberta premiers. It’s all centred up there: economic bounty versus carbon footprint; jobs versus wetland disturbance; secure supply of energy versus gobbler of wildlife habitat. Thus, we’re told, the federal cabinet decision on whether the project should go ahead is pivotal, with 7,000 jobs and 4.1 megatonnes of greenhouse gas at stake. Justin Trudeau and his ministers are due to make that call by the end of the month.

Yet it’s entirely possible we’re talking about phantom jobs and phantom emissions, because the Frontier mine is unlikely to ever get built—even if Ottawa green-lights it. The economics that have forced companies to delay or abandon oil sands mines that have already been approved don’t bode well for a $20.6-billion megaproject. Teck’s CEO Don Lindsay said recently that Frontier’s future rests on three things: a big uptick in oil prices (Teck had initially assumed US$95 per barrel, but may be able to go ahead for much less, even though “much less” is far off where prices are now, or have been lately, or are projected in the near term); a partner to develop it (major investors have been retreating from the sector); and completed pipelines. When bitumen pipelines seem like the safest bet among your project’s what-ifs, you’re not in the coziest place.

Which means that even if Trudeau’s reportedly divided cabinet approves the project, it is unlikely that birds and caribou will ever actually be threatened. Or if they reject the mine, that thousands of jobs will actually be killed. Yet somehow, the fact this oil sands mine is a largely theoretical 260,000-barrels-a-day project has failed to lower the stakes of approval.

Like weighty political decisions sometimes do—especially ones at crossroads of multiple issues, like Economy St. and Environment Ave.—this one matters because of its symbolic value. It’s not so much the direct mine construction jobs that are immediately on the line here, when Alberta Premier Jason Kenney writes letters to the PM; or when his environment minister—oh, you be you, Alberta—trots out before cameras to publicly admonish the feds for waffling. This is mainly an issue of investor confidence in the oil sands’ future, already low to begin with.

No federal government, Liberal or Conservative, has rejected an application to expand the oil sands. Mind you, until now Trudeau’s government hasn’t had a chance to green- or red-light an oil sands mine, because most companies are foregoing such megaprojects when prices are so depressed. Shell cancelled its Pierre River mine proposal shortly before the 2015 election. There are numerous projects and hundreds of thousands of barrels worth of oil sands development already approved and waiting to be financially viable, which would replace mines and wells that are currently operating as their reserves get depleted.

But the industry dreads the message a government might send by rejecting a big venture and essentially drawing a red line that signals the point at which the oil sands end. The last few booms around Fort McMurray have relied on continuous expansion. If told the government is setting a curfew on the once-unending party, investors could start packing up before twilight. And this all cues a tonne more western alienation and separatist sentiment.

But that red line is exactly many what climate-conscious Canadians expect of a Liberal government that’s supposedly serious about preventing ecological catastrophe. They find it tough to square long-range pledges to accelerate climate action with unending growth in the oil sands. If one side wants investor confidence, the other demands environmental confidence. Approval sends a signal that will strike many in the Liberal caucus as completely at odds with other signals they’re sending. The government’s Trans Mountain pipeline acquisition, with its suddenly-ballooned $12.6-billion cost, already strains its green credentials. Giving a direct “yes” to yet more bitumen mining would dump another straw bale onto the camel’s back. Alberta under ex-premier Rachel Notley legislated a 100-megatonne cap on oil sands emissions to end these cries about endless release of greenhouse gases, but the province has yet to give that limit teeth and claims there’s room for the Frontier mine ,and much more, within this carbon budget. (Ottawa is not so sure.)

Teck boasts that emissions from the Frontier mine will be dramatically lower than most other oil sands projects—so much so that its carbon footprint per barrel will rank below those of half of North America’s oil types. Kenney, meanwhile, is among the leaders who have wrongly twisted that claim to say Frontier mine will have half the emissions of the average U.S. oil.

RELATED: Trans Mountain and First Nations along the pipeline route: It’s not a dichotomy of ‘for’ or ‘against’

It’s true this mine intends to use new-generation extraction methods that have vastly better environmental performance than those used in older mines or steam-injection oil sands wells. But Teck projects its performance to be worse than other recent bitumen mines, like the Fort Hills development in which the company has a minority stake. Kenney’s claim in his letter to Trudeau that the project is “best in class” shows he has problems expressing his boasts factually. Teck has also lately pledged to go net zero, but that’s across all its mining operations, not specifically its fossil fuel mines.

This decision can signal one of two things. That on a warming planet, enough is enough; or, alternatively, that the government can’t bring itself to put an end date on Alberta’s seven-decade oil bonanza. Cabinet may apply untold conditions to an approval, but progressive Liberals will see even a green light with caveats as a green light all the same.

Meanwhile, the Athabasca Chipewyan First Nation (ACFN) in northeast Alberta has given the Trudeau Liberals fresh justification to land on the easiest option: delay. Of the 14 bands that have signed benefit agreements with Teck, the Athabasca Chipewyan nation is located closest to the Frontier site. Yet in a letter sent recently to Jonathan Wilkinson, the federal environment minister, Allan Adam, the chief of the ACFN, warned that several measures requested in talks with the Kenney government remain unfulfilled—environmental safeguards that he says “are necessary to permit the project to go forward in a way that respects the environment and ACFN’s treaty rights.”

The Alberta premier has been proud to tout the Indigenous buy-in for the mine, but now it could be held up because his government hasn’t done enough to satisfy Indigenous concerns. Kenney’s Conservatives say this might come down to issues of money and minor negotiations with ACFN that shouldn’t prompt Ottawa to stall its mine approval. But if he truly wants Ottawa’s symbolic OK, he might have to make some real accommodations.