The quixotic quest to get elected senators into the red chamber

Jason Kenney says Alberta will go ahead with a Senate vote this fall. But will the winners be allowed to sit in the upper house—even if a Prime Minister agrees to appoint them? 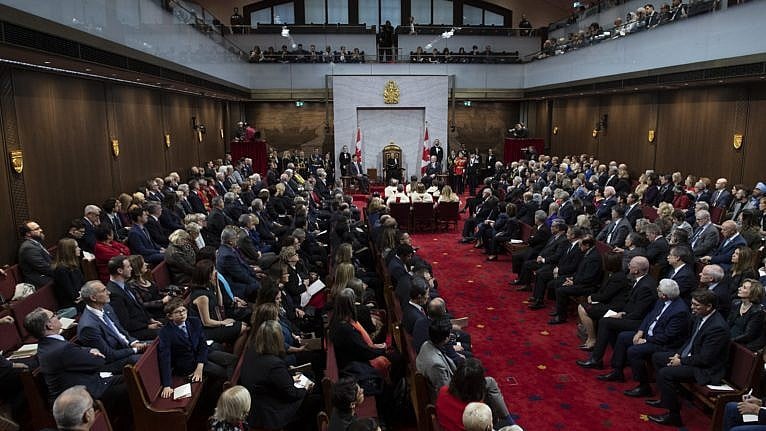 The Senate chamber during the 2019 Throne Speech. (Sean Kilpatrick/CP)

The attributes that exclude one from being appointed to Canada’s Senate have been established since 1867: if you’re under 30, or older than 75; if you’re not a Canadian citizen; if you don’t have more than $4,000 of real property; if you do not reside in the province in which you’re appointed, you’re out of luck.

More recently, another potential dealbreaker has come into play: the eligible appointee can not have won an election to become a senator. Not an election sanctioned by Ottawa, at least, and possibly not one run by a province.

This October, Alberta intends to hold elections for its preferred Senate nominees for the fifth time in its history, having last done so in 2012. In the time since then, the former Harper government set in motion a crushing blow to its own longtime dreams of Senate reforms by getting a Supreme Court reference on the Senate. Far from green-lighting an overhaul, the court advised that most changes the Conservatives envisioned would require near-unanimous constitutional amendments. Among the ideas the high court pooh-poohed was electing members of the Upper House.

“We conclude that introducing a process of consultative elections for the nomination of senators would change our Constitution’s architecture, by endowing senators with a popular mandate which is inconsistent with the Senate’s role as a complementary legislative chamber of sober second thought,” the 2014 reference ruling states. “This would constitute an amendment to the Constitution of Canada in relation to the method of selecting senators.” In other words, federal legislation enacting or enabling elections to pick senators is a big no-no.

In some interpretations, this also negates any province’s ability to get its elected favourites appointed.

“I think there is a strong argument that after the Senate Reform Reference (2014) it would be unconstitutional for a Prime Minister to appoint to the Senate someone chosen through a popular election,” says Adam Dodek, dean of the University of Ottawa law school’s common law section in an email. He adds that such a pick could face a court challenge, much like the one filed by Toronto lawyer Rocco Galati against the appointment of Federal Court Justice Marc Nadon to the top court in 2013.

Emmett Macfarlane, a University of Waterloo political scientist and constitutional law expert, says the 2014 Supreme Court ruling is not clear on appointing candidates elected in provincially run votes. The court doesn’t address the validity of the appointment of past Senate election winners—including current Alberta members Scott Tannas and Doug Black—and there’s nothing that prevents a province from holding the elections. What the ruling means for whether or not a prime minister can appoint such popular choices is murkier, Macfarlane says: “This is probably a case where such an appointment in the future is lawful but somewhat against the spirit of the decision.”

What is clear, according to Macfarlane: a federal system that incorporates elections for senators is contrary to what the Supreme Court set out. Enter Erin O’Toole and a video he released Monday. In it, the federal Conservative leader pledges to appoint the Alberta’s Senate election winners. “We would also encourage more provinces to adopt the Alberta model of holding Senate elections, and if they did, a Conservative government would pay a share of the cost of that election,” O’Toole says in the video.

Macfarlane, who wrote on the Senate reference in his latest book Constitutional Pariah, noted the court opinion was explicitly on federal legislation, but would likely also apply to O’Toole’s proposal to defray some of the cost of the elections. “If it’s an announced policy and there’s an attempt at formalizing, such as feds paying or explicitly cooperating with one or more provinces on this, then even if federal legislation isn’t involved I’d argue it’s still contrary to the reference.”

The federal Conservatives could not be immediately reached for comment Tuesday. Alberta doesn’t seem fussed by questions of constitutional problems with Senate elections. A spokeswoman for Premier Jason Kenney says the 2014 court reference “did not address existing provincial laws or processes in holding Senate nominee elections to provide advice to the PM on his recommendations to the [Governor-General],” she wrote in an email.

In the Oct. 18 vote, held in conjunction with Alberta’s municipal elections, there will be candidates running under the Conservative Party of Canada banner, hearkening back to the Reform Party candidates of 1989 and 1998 (in the last couple of Alberta’s Senate votes, people ran under the banners of provincial parties). Erika Barootes, a 35-year-old former president of Kenney’s United Conservative Party, has announced she’ll seek to run this time as a federal Conservative.

This potential problem all remains academic as long as Justin Trudeau remains Prime Minister, given that he has shown no interest in Senate elections and established his own process to pick senators—one that appears constitutionally copasetic. Until that changes, we won’t know whether Alberta is holding multimillion-dollar democratic exercises to create a list of Albertans who are ineligible to become senators.