Stephen Maher: A poll in the riding put Maxime Bernier's party at nine per cent—and numbers like that could mean the Tories have a problem 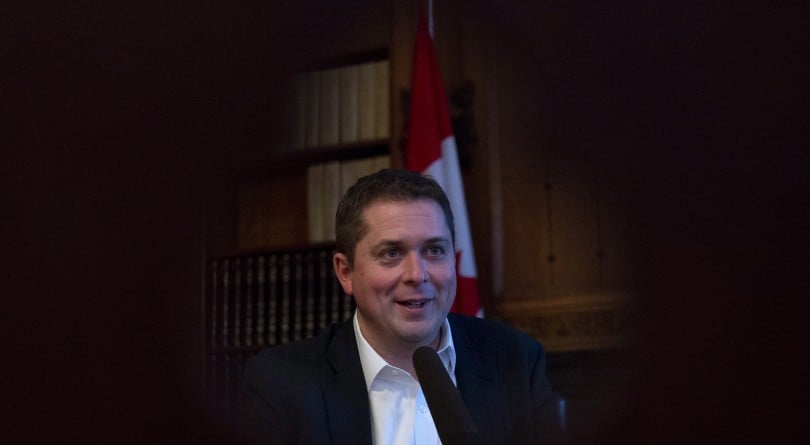 Scheer is seen during an interview with La Presse Canadienne on Parliament Hill, Monday, Dec. 17, 2018, in Ottawa. (THE CANADIAN PRESS/Adrian Wyld)

Usually, nothing puts a spring in the step of the leader of the opposition like a scandal hitting the governing party.

Voters tend to continue supporting whoever it is they voted for, at least until a government’s misdeeds accumulate, which means that is hard for an opposition leader to attract new supporters unless the government is struggling.

So, in the normal course of events, the by-election scandal that embarrassed the Liberals this week ought to have put a little extra smirk in Andrew Scheer’s dimples. Instead, though, it seems to be a rare thing in politics: a misstep by the governing party that damages the opposition’s electoral prospects.

The Conservatives have a serious problem going into the October election because the splits look so bad for them. If the NDP is weak and Maxime Bernier’s People’s Party is strong, it starts to get difficult to imagine Scheer leading his party to victory, even if he does everything well, which he likely will.

The Feb. 25 by-election in Burnaby South ought to tell the tale.

The Liberal campaign there went off the rails there this week when the Toronto Star  discovered that Liberal candidate Karen Wang’s campaign had sent out a message on a Chinese language social media network in which she bragged that she was the “only Chinese candidate,” and pointed out that Singh is of Indian origin.

This is unacceptable, of course, and the Liberals rightly insisted that she apologize and step aside, which she did, before deciding that she shouldn’t have. This is a black eye for the Liberals, but on the other hand, it increases the chances of Singh entering the House of Commons, which they likely want.

Singh, who had a rough beginning as NDP leader, has continued to struggle. He doesn’t often show up in front of the mics in Ottawa, and when he does he often seems not to know what he is talking about, as in a recent TV interview where he failed to condemn China for locking up law-abiding Canadians.

Justin Trudeau is leading what might be the most left wing government in Canadian history, which means that on many issues, there aren’t a lot of policies for the NDP to fulminate against. The party is so broke that it recently mortgaged its downtown Ottawa headquarters building. Long time loyalists are giving up on the party.

If the Dippers want to save the furniture, they likely need to rally their base, which means campaigning on poverty and inequality, taking cues from Bernie Sanders, taking up the fight for the downtrodden. But Singh, a lawyer who wears bespoke suits and drives a BMW coupe, is no working class hero.

The party’s MPs know they are facing a tough election with him as their leader, and many of their biggest stars have made other plans. Fin Donnelly, Romeo Saganash, Helene Laverdiere, David Christopherson, Irene Mathyssen and Linda Duncan are all headed for the exits.

Some of those who plan to fight for their ridings would like to get rid of Singh and have Nathan Cullen or Charlie Angus—whose French is getting better—step in to lead the party into the election. But knifing Singh would look terrible to the young, urban multicultural voters the party needs, unless, that is, he fails to win the Burnaby South by-election. So New Democrats and Liberals will both likely be hoping their candidate loses.

The Conservatives would love to win, of course, but a poll of the riding tells a disturbing story for them. The Conservative candidate is polling at 22 per cent, which puts him out of contention, but Maxime Bernier’s candidate—who has contentious opinions on transgender issues—is polling at nine per cent.

If Max’s candidate gets that many votes, it will be a severe blow to Scheer’s hopes and dreams.

Max has been signing up old grass roots Reform Party organizers, and he has launched riding associations across the country. He could fail to elect any MPs in 2019 but still spoil Conservative chances in the splits, particularly in Ontario, and allow Trudeau to benefit, as Jean Chrétien did before Stephen Harper united Reform and the Progressive Conservatives.

In a recent interview with American Conservative commentator Ben Shaprio, Harper warned against allowing a party to develop an alternative to its right.

“I had a rule. I always said, if I had one or two per cent to the right of me that’s fine. But if you get five per cent, or 10 per cent or 20 per cent, or infamously with Hillary Clinton, 45 or 46 per cent, and you’re calling them fringe, there’s something wrong with you.”

Scheer has little choice but to try to keep Bernier’s movement from growing, which means delivering loud messages to his most conservative supporters, neglecting those who voted for Trudeau last time but might vote Conservative in October if it looks like a moderate alternative.

The Tories have a lot of money, a lot of seats and a powerful machine, but if Jagmeet is weak and Max is strong, the splits are going to kill them.