The red in our Maple Leaf is for chronic deficits

Opinion: History shows Canadian politicians will rack up debt through bad times and good. The result: ever-constricted choices for the very people politicians hope to serve. 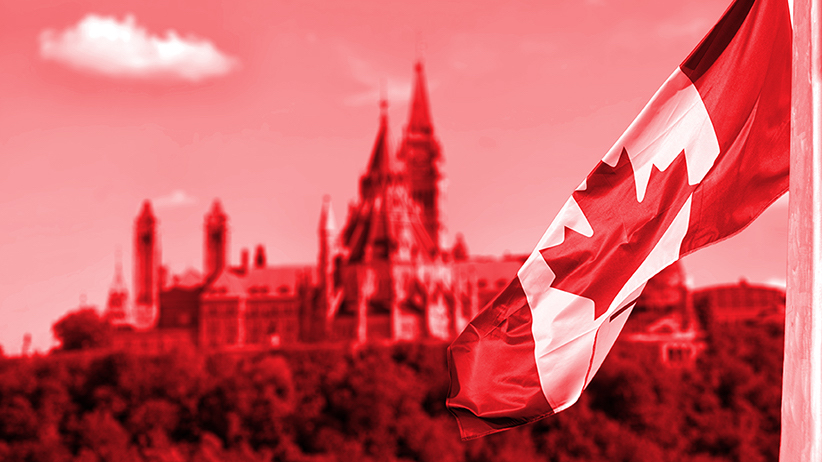 Mark Milke is author of Tax Me I’m Canadian: A taxpayer’s guide to your money and how politicians spend it.

With the federal government’s recent quarterly update, and the decision to forego fiscal prudence, again, Finance Minister Bill Morneau and his colleagues are following a longstanding Canadian tradition that’s existed since the Second World War: always rack up debt in bad times, then continue piling it on through much of the good times, too, leaving little room to ever be prudent and balance the books. The result: ever-constricted choices for the very Canadians politicians hope to serve.

Some background: The federal Finance department produces an annual set of tables that track federal and provincial spending, revenues, deficits and debt. The Fiscal Reference Tables, as they are known, are not exciting reading, and have their shortcomings. The tables show what the various governments claim in any given year: a deficit, or a surplus. That is less helpful than one would suppose because of how some governments try to hide expenses. (See: Kathleen Wynne government versus the Ontario Auditor General, circa 2017.)

READ: A brief history of high taxes and government meddling

Still, if you want the eagle-eye view of how frequently governments spend on you, but bill your kids and grandkids—even if you are 20 years old and have neither yet—here’s the rundown.

First up, the federal government. Using recent and archived tables that trace money flows back to 1947, one can see two golden periods for federal balanced budgets: in the late 1940s until the early 1950s—a period when the federal government was reducing military expenses—and between 1998 and 2008, when Ottawa recorded a record 11 straight surpluses. The latter was prompted by mid-1990s budget cuts after international debt rating agencies cut Canada’s credit rating and the Wall Street Journal and others began taunting Canada’s fiscal profligacy.

Federal deficits in 70 per cent of all years since 1947

Other than those eras, the federal government was in the black in just two years: 1970 and 2015 (and note the years refer to a fiscal year-end, i.e., March 31). That was it. In seven decades of budgets, Ottawa ran surpluses in just 21 years and deficits in 50 years, equal to 70 per cent of that stretch.

Now compare Ottawa’s red ink record to recession years. Since the Second World War, Canadians have endured 10 recessions that lasted 12 years in total. (Some lasted longer than a year, so I count that as a two-year recession and I count those shorter than a year as one full year.) 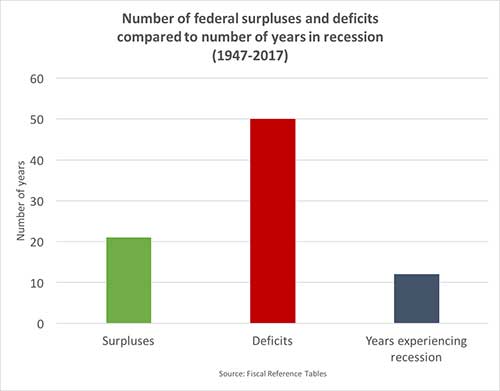 Expressed another way: the federal government’s red ink budgets (50) lasted four times longer than the years in which Canada has been in a recession (12). Even if that ascribes to Keynesian policy—spend during bad times and run budget surpluses in good times—history shows federal politicians just keep spending through it all. They routinely ignore that latter bit of Keynesian advice.

Provincial deficits: 86 per cent of all years since 1967

And now compare that record to recessions. There have been five recessions since 1967 that occupied a total of seven years, contrasted with 43 years of provincial and territorial red-ink budgets. The provinces thus ran deficits six times longer than they were in recession. 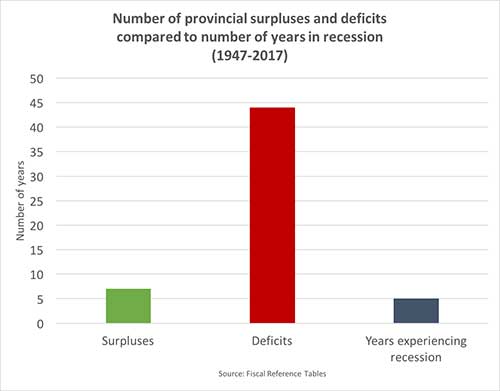 With an insincere apology to Stalin, one dollar in interest may be a tragedy, but a billion dollars in interest is a statistic—so let’s make this more real.

In fiscal 2017, the federal government paid $24.1 billion in interest on the federal debt. What could that have “bought” instead? Answer: a complete cut to Employment Insurance premiums for employees and employers, which brought in $22.1 billion that year, with $2 billion left over.

Provincially and in the territories, debt interest cost taxpayers $29.2 billion in fiscal 2017. That could have paid for the end to $25 billion worth of provincial payroll and workforce taxes, plus an elimination of the provincial portion of all property taxes, country-wide. After that, there would still be $4 billion left over.

What becomes clear from the dry data is that governments don’t need the recession excuse to spend their (our) way into red ink; that’s just routine policy. It is also costly to other potential destinations for the cash.