The rising popularity of Doug Ford 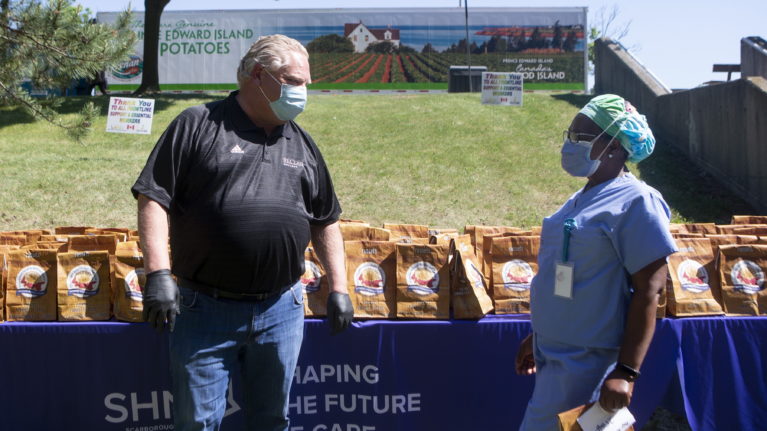 As Ontario Premier Doug Ford is celebrating the second anniversary of his majority victory at Queen’s Park this week, a new poll shows the Progressive Conservative leader is enjoying a mid-mandate bump and has taken back the lead in voting intentions in the province.In a poll conducted by Mainstreet Research and commissioned by 338Canada, the Ontario Progressive Conservative Party jumped nine points since Mainstreet was last in the field in March, and has the support of 42 per cent of the poll’s decided and leaning respondents. 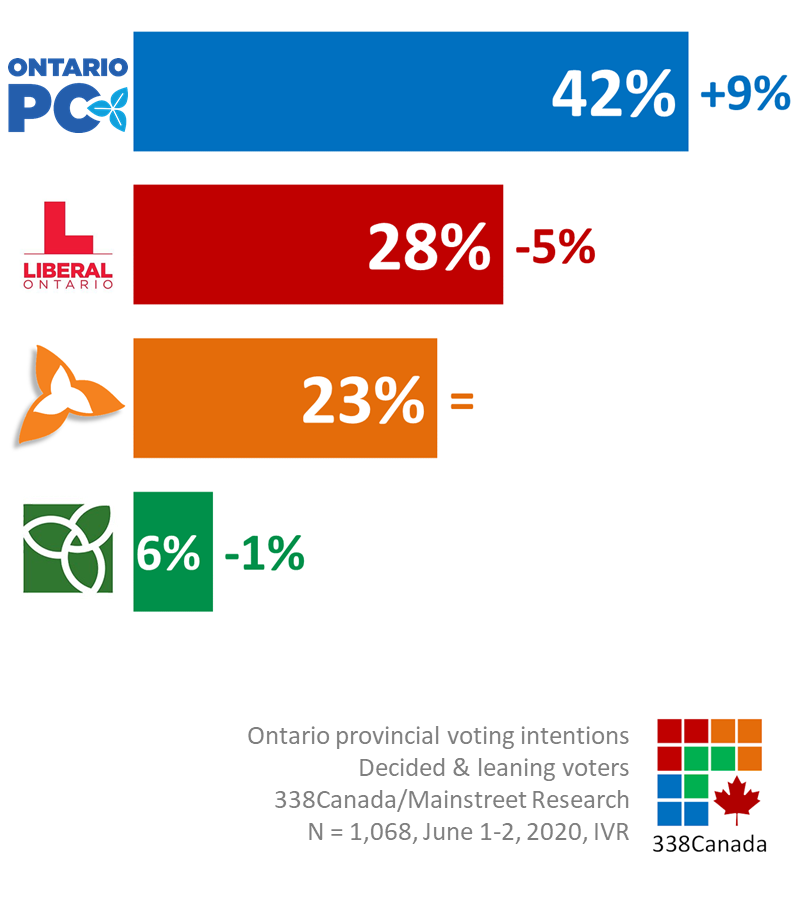 The Ontario Liberal Party (OLP) has lost five points and stands at 28 per cent, while the Ontario NDP remains stable at 23 per cent. The Green Party of Ontario is at 6 per cent.While the main parties stand in a statistical three-way tie in Toronto, the PCPO gets the support of 46 per cent of respondents in the seat-rich region of the 905/GTA, a crushing 17-point lead over the OLP. Although we must use caution with regional sub-samples because of their higher uncertainty, the PCP also leads in Central, Southwestern and Northern Ontario by 9 points or more.

The COVID-19 pandemic has shown serious signs of slowing down in Canada in the past weeks, so much that many provinces have begun implementing successive phases of re-opening businesses and public services. Although we are not out of the woods yet—especially Ontario and Quebec—there has been growing room for optimism. On the political front, polls from several sources have indicated that, both at the provincial and federal levels, governing parties are faring generally well in this country. Justin Trudeau is still the favoured federal leader by a significant margin according to Nanos, and Léger has measured the Liberals on top of voting intentions since the pandemic arrived in Canada.

In Ontario, several polls published this spring showed that Doug Ford’s PC was in a statistical tie with the OLP, suggesting perhaps new Liberal leader Steven Del Duca was enjoying a novelty bump. However, the Toronto-based polling firm Campaign Research released its Ontario figures last week which suggested Ford had taken a double-digit lead over his rivals. The poll was a stark contrast to recent trends in the province, which generally means one of two scenarios: either the poll was 1) a statistical outlier, or 2) a precursor of a new trend. Mainstreet’s numbers today seem to indicate that Ford is indeed enjoying a COVID-bump like many other premiers in Canada.

According to this latest poll, Ford’s net favourability stands at +14 (50 per cent favourable, 36 per cent unfavourable), the highest of any party leaders in the province: 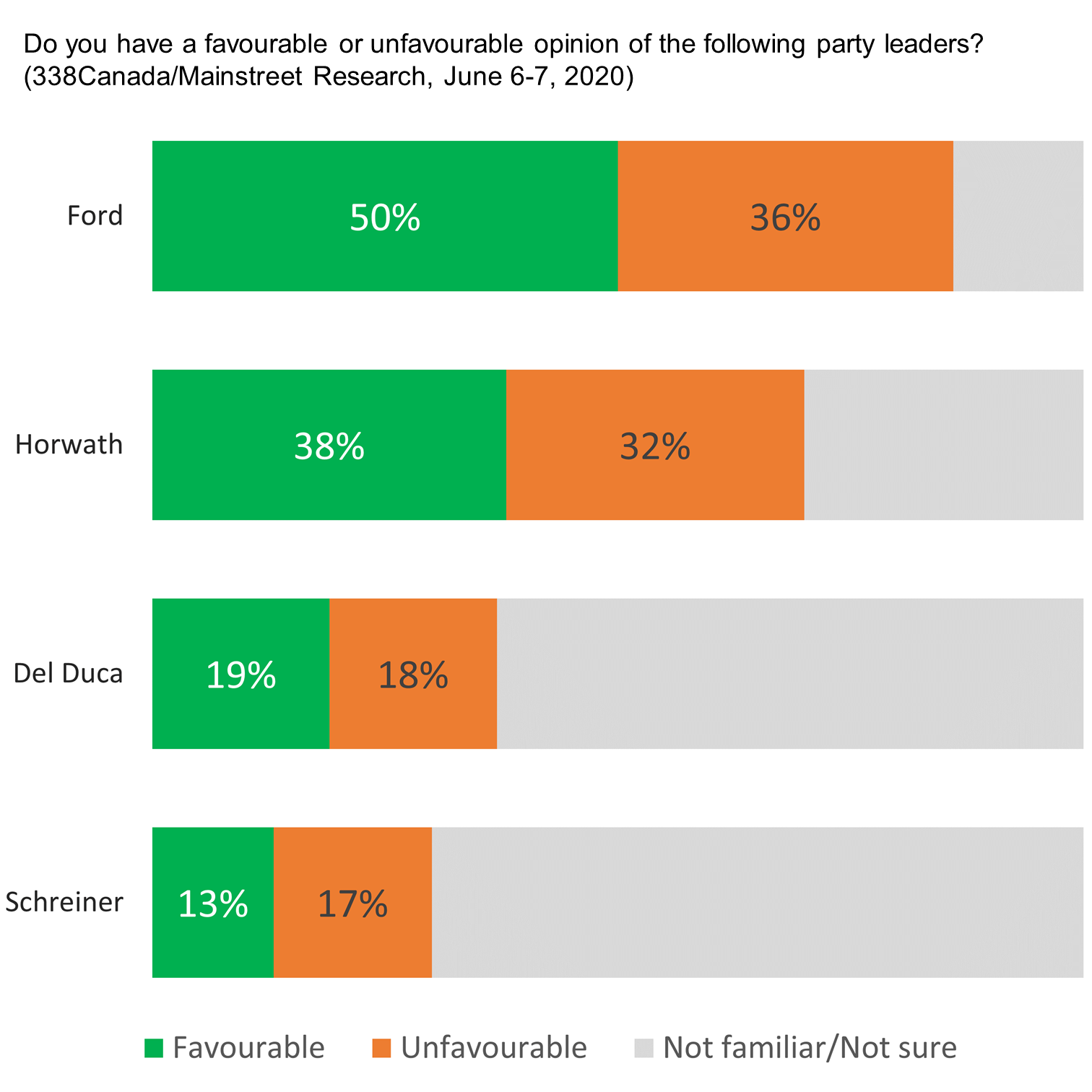 ONDP leader Andrea Horwath comes second at +6 (38 per cent favourable, 32 per cent unfavourable). As for Stephen Del Duca, his main challenge for the next months is depicted clear as day in this graph: Although Del Duca was an MPP for six years and even served in Kathleen Wynne’s cabinet, his notoriety remains surprisingly low among voters. Over 60 per cent of Ontarians surveyed in this poll don’t know or are not familiar with the new Liberal leader.

As mentioned above, several prominent incumbent leaders in Canada have seen their numbers rise since the pandemic began. Justin Trudeau, François Legault and John Horgan, to name a few, have all improved their standings of late, and we can now add Doug Ford to this list. How long these positive numbers will last is another question, however, especially if the pandemic regains ground during the summer and into the fall.

For a complete breakdown of Ontario’s 338Canada projections, visit this page.

This poll, commissioned by 338Canada, was conducted by Mainstreet Research on June 6-7 among a sample of 1,068 adults, 18 years of age or older, living in Ontario, using automated telephone interviews (Smart IVR). Respondents were interviewed on landlines and cellular phones. The survey is intended to represent the voting population in Ontario. The margin of error for the poll is ±3 per cent at the 95 per cent confidence level. Margins of error are higher in each subsample. The poll’s report is available on this page.