The show under Washington's big top

An ordinary Wednesday in the Trump era turns D.C. into a veritable circus 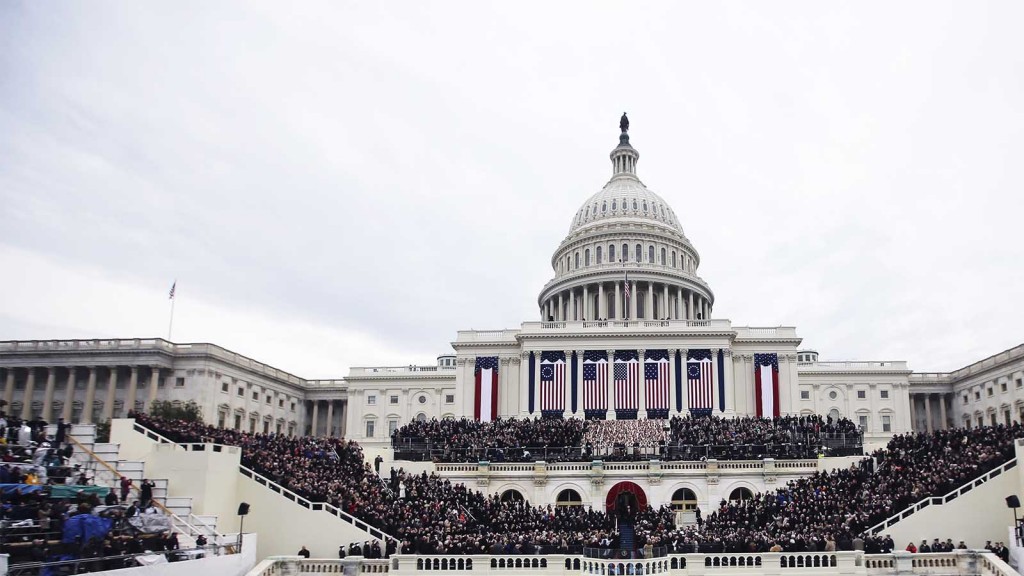 Inauguration ceremonies swearing in Donald Trump as the 45th president of the United States take place on the West front of the U.S. Capitol in Washington, U.S., January 20, 2017. (Carlos Barria/Reuters)

No wonder the Ringling Bros. circus is folding; it can’t compete with the United States Congress.

It is early morning in a Senate office building on Capitol Hill in the middle of the second week of America’s brand-new president’s presidency, the day that used to be known as Wednesday. But now, guess what day it is. Aw, come on, what day is it?

Two committee hearings are scheduled for formal chambers along the same marble corridor of an edifice named for the late solon from Illinois, Everett McKinley Dirksen. Sen. Dirksen was the sage who once observed, “A billion here, a billion there, pretty soon you’re talking real money.”

First on the calendar is a meeting of the Senate Finance Committee, which is gathering to vote on the Donald’s nominations of Congressman Dr. Tom Price and gazillionaire Stephen Mnuchin to become the secretaries of Health and Human Services and of the Treasury, respectively.

There are 14 Republicans on the committee, which is chaired by 82-year-old Orrin Hatch of Utah. All of these assemble right on time and all vote Aye.

There are 12 Democrats on the committee. All of these call in sick, out-of-town, or dead, which wouldn’t have prevented them and five million other cadavers—in the president’s cockamamie opinion—from voting for Hillary Clinton in November.

With no one present to oppose them, Messrs. Price and Mnuchin are duly ratified by the football score of 14-0. An old man in the press gallery is reminded of the Marx Brothers in a movie called Duck Soup:

Ambassador Trentino: Now, Chicolini, I want a full detailed report of your investigation.

“The Democrats should do their job and stop playing stupid games,” Orrin Hatch tells us in the hallway.

Next door, the Judiciary Committee is sitting around a square table, getting ready to vote on whether or not to send the nomination of Sen. Jeff Sessions of Alabama to be the U.S. Attorney General to the Senate floor, where Republicans hold an advantage of 52 to 48. The chairman of the committee is 83-year-old Chuck Grassley of Nebraska.

This time, all the Democrats show up, but not all of the Republicans do. The first to speak is Sen. Sheldon Whitehouse of minuscule Rhode Island, which—according to a recipe baked by the Founding Fathers as recently as the year 1787—is allowed to send as many senators to Washington as California and Texas and New York.

Mr. Whitehouse accuses Sen. Sessions of—among other disqualifying acts—defaming immigrants from Hispaniola, saying in 2006 that, “Almost no one coming from the Dominican Republic to the United States is coming here because they have a provable skill that would benefit us … rather than a skill-based program, more like Canada has today.”

“Look at Big Papi, David Ortiz, swinging his bat for the Red Sox,” Sen. Whitehouse jibes on Trump Day morning, presumably unaware that (a) spring training doesn’t start for another month, and (b) Big Papi has retired.

There is more, the Ocean Stater continues. Jeff Sessions did not push back at Donald Trump when the over-tanned magnate demanded that Mrs. Clinton be locked in prison, a campaign war cry “that made honest prosecutors’ stomachs turn.” Sessions has not publicly objected to what Whitehouse labels Trump’s “unprecedented swamp of conflicts of interest and dark money secrets … a Gong Show with a nuclear button … And they’re just getting started.”

Now Senator Al Franken of Minnesota, the erstwhile comedian whose senatorial countenance is one of almost perpetual furrowed displeasure, is given 20 minutes to go after Sessions, Trump, the Republican Party, and assorted testimony that was given in another confirmation hearing, only 31 years ago.

This turns into a personal and vindictive diatribe by Franken against Sen. Ted Cruz of Texas, who is not here to defend himself with either his profound knowledge of the Constitution or with a dozen raw eggs, as sometimes happens in the parliament of Ukraine.

“That’s what happened, those are the facts,” Franken sneers at Cruz’s vacant chair.

“Mr. Chairman,” retorts Sen. John Cornyn of the Lone State State, “I object to the senator disparaging a fellow member of the committee here in his absence. I would hope you would do it to his face.”

Franken: “Well, he should be here, first of all.”

Cornyn: “It would be the decent and honourable thing to do to do it in the senator’s presence.”

Franken: “Well, then get him here.”

As if by magic, Ted Cruz arrives at the 11th hour with a tall coffee and a beaming smile while Franken still is fulminating about voting rights and election fraud. When this peters out, Sessions is endorsed by a party-line vote of eleven to nine.

“Shame, shame, shame!” bellows a woman in the gallery before she is wrestled away.

While this is going on, there is news from the outside: the National Zoo is suspending its search for a bobcat named Ollie who has been missing from his cage for three days.

Thirteen schools in the District of Columbia cancel outdoor recess.

The Senators scatter for lunch. Cruz is corralled in the corridor and asked about the nomination of Colorado jurist Neil Gorsuch—after just one brief meeting with that eminent legal scholar, Donald J. Trump—to the Supreme Court.

“Are you disappointed he didn’t pick you?” Cruz is asked.

At 12:10, President Trump offers in the direction of Republican leader Mitch McConnell–whose wife he has appointed to be his Secretary of Transportation–that, “If we end up with the same gridlock we’ve had in Washington for longer than eight years, in all fairness to President Obama, a lot longer than eight years. If we end up with that gridlock I would say, ‘If you can, Mitch, go nuclear.’ ”

At 1:50, Chuck Grassley and Neil Gorsuch pose for us in the marvellous foyer of the lower floor of the Senate wing, with its colourful frescoes of Benjamin Franklin and Robert Fulton and its reminder that once, long ago, this building was filled with men of serious purpose, although they occasionally did maul each other with canes.

Shortly after 2 p.m., Sen. Chris Coons of Delaware, a Democrat first elected in 2010, hustles baldly by.

“Has it ever been this bad around here?” Maclean’s asks him.

“In my first year, I asked that question of Senator Leahy,” Coons replies. (Patrick Leahy of Vermont has been in the Senate since 1975, which was six years after Everett McKinley Dirksen finally vacated the chamber by dying.) “I asked him, ‘Is this the worst it’s ever been?’ And he said no.

At 4:50, Ollie the bobcat is found hiding in a bush at the National Zoo.