The sketch: Poilievre holds the future of our democracy in his hands

The Fair Elections Act is defended 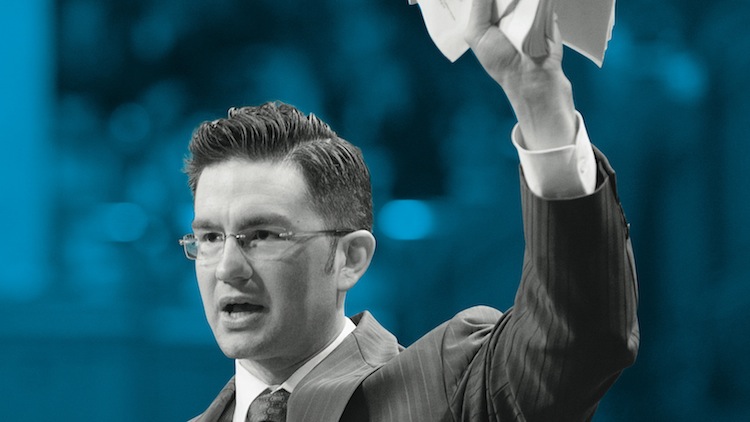 So it is that Pierre Poilievre, the precocious obfuscator, the baby-faced irritant, the talented politician who was elected at the age of 24 and who was previously referred to on occasion by his pal John Baird as “Skippy” and who would come to possess some power and prominence, now holds in his hands the future of Canadian democracy.

Or at least so it is that the 34-year-old, newish minister of democratic reform bears on his shoulders the weight of a 247-page bill that is merely intended to fiddle variously and widely with the formal procedures of our federal democracy. Be it his to defend and protect and somehow carry to Royal Assent without embarrassing the government.

It was actually his to defend before he had even tabled it this morning; as it was yesterday that Mr. Poilievre was asked to explain why he had not consulted with the chief electoral officer on the bill he was set to table.

“Mr. Speaker, I do not know why the member wants to ask questions based on facts that are not true,” he had lamented of the NDP’s Nycole Turmel. “The truth is that I had an excellent meeting with the CEO of Elections Canada, and I read his reports thoroughly before we drafted the bill that will be introduced.”

It was on this relatively minor point that the pursuit of Mr. Poilievre began again this afternoon.

“Mr. Speaker, yesterday the Minister of State for Democratic Reform claimed he had consulted the Chief Electoral Officer. The problem is, Elections Canada said he did not,” the NDP’s Craig Scott reported. “Today, the minister smeared Elections Canada saying: ‘They should not be wearing a team jersey.’ Does the minister really think that misleading the House one day and smearing Elections Canada the next is a really good way to start discussions on amending our elections law?”

Mr. Poilievre was apparently ready for something like this.

“Mr. Speaker, certainly the wrong way to start discussions is to do what the member did which is to walk out and announce his opposition to a bill that he admitted that he had not even read,” replied the minister who convened a news conference about his bill this morning without first providing reporters an opportunity to review said bill.

“As for consultations, I did meet with the Chief Electoral Officer on August 22, for about an hour, listened carefully to all of his thoughts until he had nothing more to add. I told him if he thought of anything he could call me at any time. I have since read his reports, studied his testimony before committee and implemented 38 of his recommendations in the Fair Elections Act,” Mr. Poilievre review. “This act would improve elections in this country and make sure our democracy rests in the hands of the people.”

Various Conservatives stood to cheer, each of them having apparently had time in the previous four hours to carefully and individually review each of the bill’s hundreds of clauses and find it to their personal liking.

Mr. Scott attempted to stick with his preferred narrative.

“Mr. Speaker, it is clear to all that the minister actually is off to a really rough start,” he said.

“My bill on fighting electoral fraud proposed fines of up to $500,000,” Mr. Scott continued. “The Chief Electoral Officer proposed up to $250,000. The government’s bill limits fines to just $50,000, 10 times less than the NDP proposal. So why has the government failed to provide tough punishments for people who commit serious election fraud?”

Mr. Poilievre was apparently ready for this too.

“Mr. Speaker, I do not know why the member is trumpeting his plan to impose just monetary fines. In fact, the Fair Elections Act would impose prison time for election fraud, which goes much further,” he responded. (The amendments here are difficult to follow, but one category of offences has had its maximum punishment increased from three months to six months and various new offences have been created.)

This was followed by some attempt at poetry, or at least animal imagery. “We will ensure that the election watchdog, the commissioner, has sharper teeth, a longer reach and a freer hand,” the minister mused.

The next two questions—Would the measures on voter identification violate the Charter of Rights and Freedoms? And why would Elections Canada be limited in its advertising?—were less easily dismissed. And then the official opposition sent up furious David Christopherson to vent furiously at the government side.

“Mr. Speaker, from in-and-out to robocalls, Canadians do not trust the Conservative government, and for good reason,” Mr. Christopherson ventured, wagging his finger. “For example, on March 12, 2012, every member of the House, including the Conservative government, voted unanimously in favour of the NDP motion to give Elections Canada the power to compel witnesses and the power to demand financial documents. The new bill would not provide these powers. Why did the government break its promise to Canadians?”

The mustachioed New Democrat from Hamilton more or less growled this question. But Mr. Poilievre was ready for this too.

“Mr. Speaker,” he replied, “the member should have started by reading the motion that he voted for and that he trumpets on the floor of the House of Commons today. What it actually says is that the government should give the power to Elections Canada to request documents from political parties. Elections Canada has that power and the Fair Elections Act would maintain it.”

A short while later, in response to a series of words that Liberal MP Scott Simms attempted to punctuate with a question mark, Mr. Poilievre would aim again for poetry. The author of the Battle Hymn of Peter Penashue would appeal once more to greatness.

“In this country we have many cultures, many peoples, all of whom celebrate one thing in common, that is democracy,” he proclaimed, pumping his fists and gesturing assuredly. “Fair elections deliver democracy and this legislation would continue that practice in this country.”

He who was once assigned to dismiss concerns about the Conservative party’s in-and-out arrangements, now assigned to carry the highest principle. Possibly, depending on one’s view of those in-and-out transfers (at the very least it would seem to have involved exploiting a loophole), this suggests that God (or Stephen Harper) appreciates irony. Possibly it merely suggests that Mr. Poilievre is well-suited for this sort of thing.

But on something like these ideas of democracy and fairness, it would be another individual well-schooled in this stuff who would shortly thereafter set something of a trap for Mr. Poilievre.

“There’s a way for the Conservatives to try to convince Canadians and the other Members of Parliament that they’re not trying to load the dice in their own favour,” Thomas Mulcair told the traditional gathering of reporters in the foyer, “and that’s if Stephen Harper respects the right of Parliament to have a full and complete debate on this issue. If Stephen Harper uses closure to try to get this new electoral bill faster through the House of Commons when Marc Mayrand says it’s not required before the end of June*, we’ll all know that our worst fears about what this bill is actually about are there, that the Conservatives are actually once again trying to load the dice in their own favour.”

*To support this, the New Democrats point to Mr. Mayrand’s reference to “spring 2014” here and here.