The sum of U.S. election fears in one pile of ballot boxes

Image of the Week: What everyone thought would happen is happening. That's concerning—but surely not cause for shock and panic. 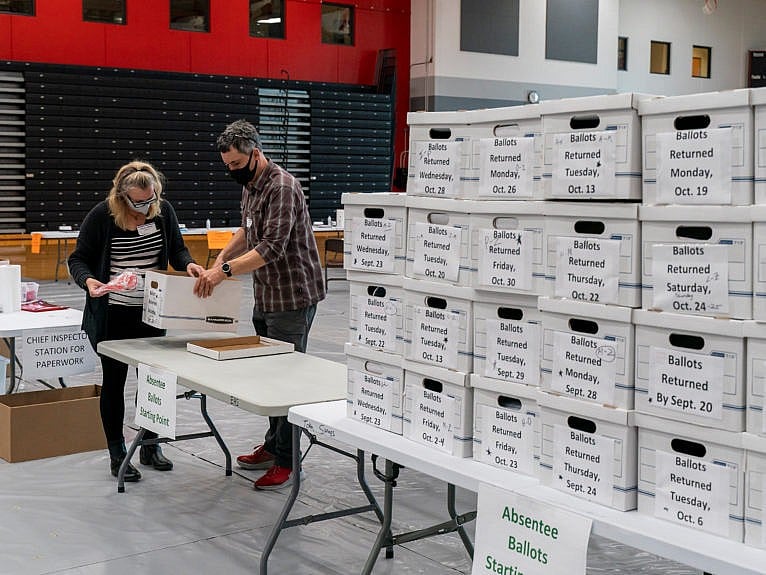 Considering the high stakes and non-stop tension of the past 24 hours, one cannot reasonably say there have been many surprises. Pollsters expected Joe Biden to win Arizona; it was a long shot he’d get Texas, or even Georgia and North Carolina. The Sun Belt was a nice dream for Democrats, but it was always going to come down to the Rust Belt, the trio of Michigan, Wisconsin and Pennsylvania. And so it has. Right on cue, as those states’ election officials began counting the millions of early mail-in ballots after an inconclusive election night, President Donald Trump claimed in tweets his lead has “started to magically disappear.” There’s nothing magical about it. Everyone knew Republicans were more likely to vote in person, shrugging off the coronavirus, and giving the president an impression of victory at the stroke of midnight on Nov. 3. Everyone knew Democrats, who tend to live in dense urban areas, would try to avoid the virus (and the lineups) by mailing in their ballots instead. The president has been claiming for months now, without evidence, that mail-in ballots are systemically fraudulent. Perhaps on some level he knew they would tilt blue and was planting the seeds for the chaos he’s trying to exploit right now. Experts have seen all this coming since the pandemic began. If the president wants assurance that mail-in voting is fair and legitimate, he should walk into a tabulation centre like the one above, where the proof lies in the hundreds of yet-unopened boxes containing millions of legitimate ballots. Instead, he claimed premature victory and, sticking to this dystopian script, will argue his potential loss is evidence of a rigged election. It’s been said for months that this will last a week. Don’t be surprised when it does.