Harper has pledged more than $5 billion to urban rail projects. Forward-looking? The payment system sure is. 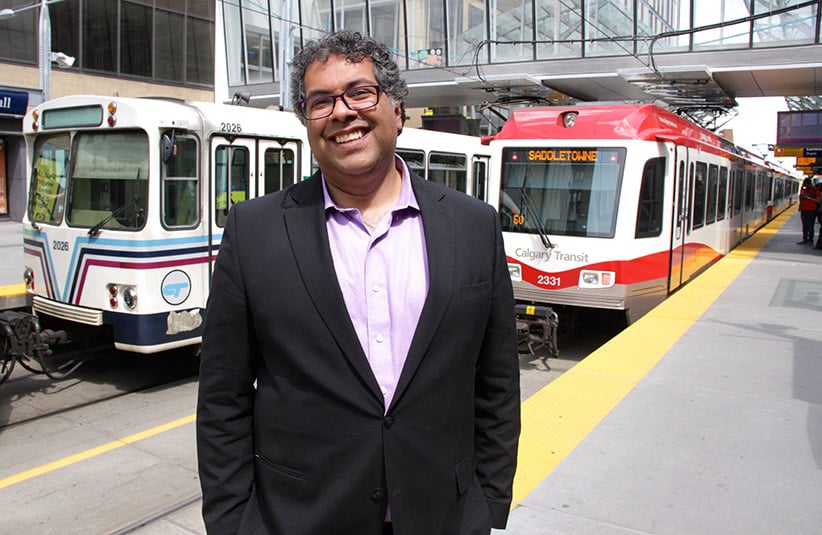 Potential suitors, political and otherwise: The way to Naheed Nenshi’s heart is by light rail.

The Calgary mayor, never one to spare combative rhetoric or snark when he’s unhappy, was gushing Friday as Calgary-based Defence Minister Jason Kenney and fellow MPs pledged up to $1.53 billion for the Green Line, a 40-km LRT route that spans nearly the entire sprawling city, north to southeast. The project was proposed to start with express buses next decade, then be converted to rail, one fine day. Instead, it will start a train line and by completed by 2024, Nenshi said.

This also converts Nenshi to a temporarily sated politician, rather than a potential wild card poised to bang the pots and pans while demanding the federal leaders care about Canadian cities (most notably his, one that’s more politically volatile than before).

“It’s an extraordinary investment, and it will change the face of this city forever,” Nenshi said. In past months, the mayor has said that the party leader who figures out cities and public transit will become prime minister. Et tu, Messrs. Trudeau et Mulcair? “If they’ve got better ideas, we’re happy to take them,” Nenshi told reporters.

This invisible novelty-sized cheque from Calgary MPs came the same week an Ottawa Conservative confirmed up to $1 billion available for the capital city’s next LRT stage. And, last month, Prime Minister Stephen Harper himself was in Toronto to tie a $2.6-billion bow on Mayor John Tory’s plan for a SmartTrack transit line. 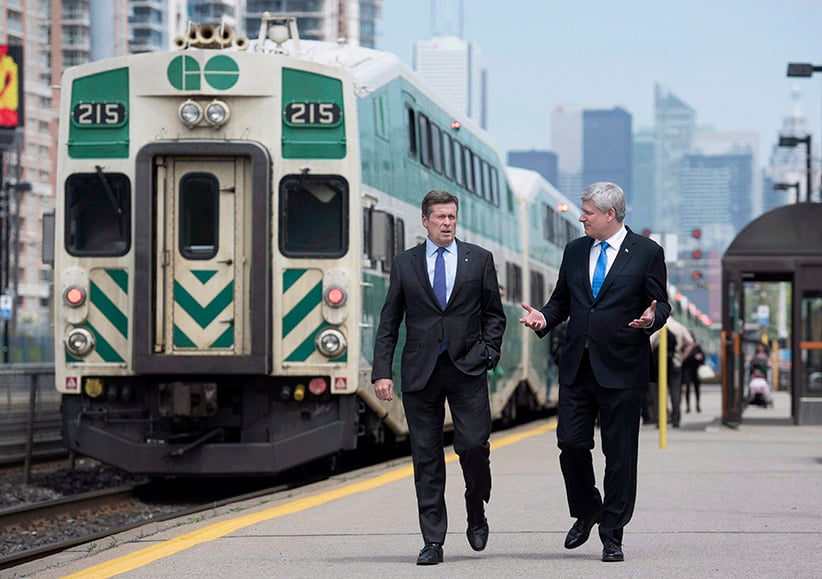 That is $5.13 billion of new transit pledges before the election campaign, the sort of commitment mayors like Nenshi and Tory need to fulfill their own project ambitions, and it’s the promise of sweet commuting relief for thousands of citizens in the very cities and suburbs the Harper Conservatives want to please around this time of the election cycle. (It’s new for Calgary to be included in the Conservatives’ pre-campaign goodies tour like this; the party and right-wing predecessors always sweep the city, but, this year, the Liberals are competitive in a couple of Calgary ridings, and who knows how Rachel Notley’s orange wave will translate federally in Alberta.)

And here’s the glorious thing for a Harper team bent on balancing the budget, yet also opening the purse strings: This is a buy-now, pay-later announcement. These $5.13-billion promises have zero bearing on this year’s budget, or next year’s. It will matter in 2019, and 2023, and possibly into the 2030s and 2040s, as well, so let’s give a big round of applause to the next several federal finance ministers for their solid commitment to the transportation infrastructure of both today and tomorrow.

Here’s how these transit promises work. The pledges in Calgary, Toronto and Ottawa will all come through the Public Transit Fund, a new program announced in this year’s budget. It’s targeted at major urban transit projects; if it’s not going to cost a billion dollars or more, it doesn’t count. The federal government won’t actually start releasing this fund until 2017-18, when the first $750 million flows, then the same amount in 2018-19, then $1 billion every year afterward. This means that, merely to pay out these transit announcements in Toronto, Ottawa and Calgary, the Public Transit Fund is tied up until at least 2022-23, nearly two full electoral terms from now. It’s safe to assume there will be more transit-project pledges in more vote-rich major cities through this same fund, and Edmonton Mayor Don Iveson is already lining up for his share. The NDP and Liberals will doubtless have their own transit infrastructure promises, but Conservative-government announcements may prove hard to undo, at least politically. 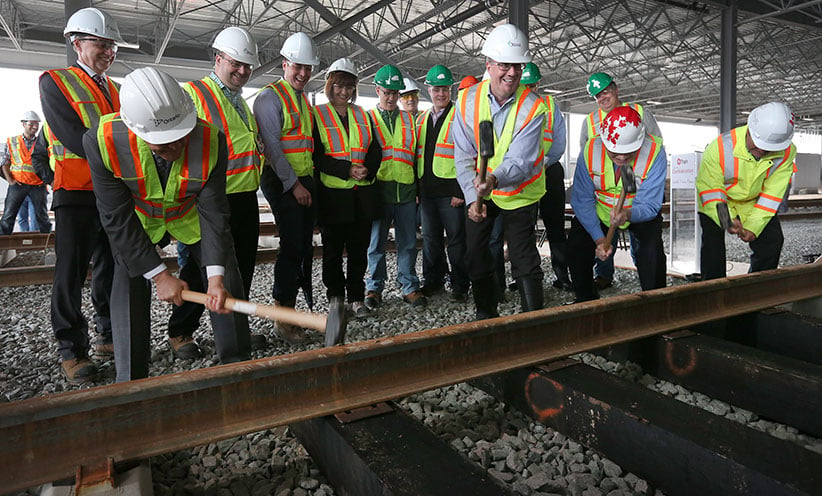 There are several caveats with this cash, too. If it’s a historic day today, Nenshi will get to announce it’s another historic day when, and if, the federal government actually approves “up to” $1.53 billion through a formal application Calgary has not yet submitted. Cities must apply for the transit fund through the agency Public Private Partnership Canada, and consider private sector involvement in alternative financing (read: creative debt tools) for the construction, operation and/or maintenance. Budget 2015 suggested a very slow release of these funds: “The government will consider providing a stream of predictable payments over a 20- to 30-year period, rather than upfront contributions.” In other words, and this is how Nenshi’s office interpreted Friday’s promise: Finance Canada will release the transit money gradually over a couple of decades, but Calgary can start building right away by borrowing the whole amount now and rely on the small “predictable” federal grants for annual repayments. The long-term debt shows up on the city’s books, rather than the federal government’s, and Nenshi is no debt hawk, as long as there’s a defined way to repay.

It’s a variation on debt-financing of public infrastructure that a slew of economists such as former Bank of Canada governor David Dodge have advocated. But, through this transit-fund system, the federal government doesn’t have to incur any debt. It just has to commit to this spending until Harper’s kids, Ben and Rachel, are in their 30s or 40s, and Mulcair is a great-grandfather. Those future governments, on the hook for those cheques, will just have to look back at photos of how happy those mayors and cabinet ministers were in 2015 to recall how important those commitments were, back in the day.