Ads and memes from Ontario Proud and North99 have the distinct flavour of party-produced attacks. That's not a coincidence. 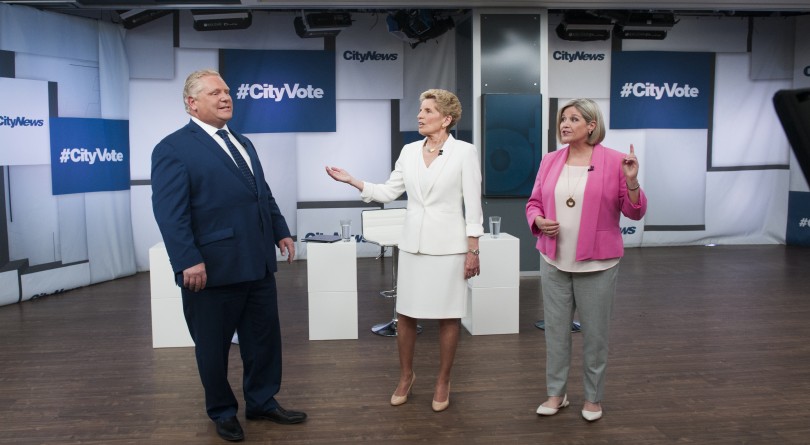 Just days into the writ period for the Ontario election, a video with the caption, “Doug Ford’s perfect response to Kathleen Wynne” graced the Facebook news feeds of thousands of Ontarians. It was a clip of a heated moment at the CityNews debate, where Ford slams the Wynne over how much Ontario’s debt has grown. “You believe in tax, tax, tax, spend, spend, spend,” he says in the clip.

At around the same time, a mocking video of Ford in a ‘gotcha’ moment, struggling to answer a questions about how a bill gets passed in the Ontario legislature, circulated widely on Facebook with the caption, “Wants to be Premier of Ontario, Doesn’t know how the job works.”

At first glance, one could reasonably assume these examples of political mud-slinging have come from the war rooms of the PCs and the Liberals. In fact, they’re the works of Ontario Proud and North99, outside groups employing sophisticated social media tactics, who fervently insist that they’re non-partisan. But the targeted, highly personal nature of the attacks is no coincidence: the groups are both run by ex-political staffers—Jeff Ballingall, formerly of the Tories; and Geoff Sharpe, a sometime Liberal.

Both are weaponizing Facebook though the production of shareable memes, graphics and videos intended to be easily consumed on mobile devices and quickly go viral. The type of political social media content they produce appears to be inspired by U.S.-based groups such as MoveOn, NowThis, and AJ+, which have been especially active since the lead-up to the 2016 U.S. presidential election.

As in the U.S., the veil of non-partisanship around the Ontario groups can seem exceedingly thin. Ontario Proud’s mission statement says that it’s “dedicated to holding Kathleen Wynne and her Liberal government accountable” and has almost exclusively focused on attacking the Liberal leader (and occasionally Justin Trudeau) since its inception. But in wake of the NDP’s recent surge in the polls, it’s begun to shift its sights to Andrea Horwath and the NDP.

The group has also produced content praising Doug Ford’s policies, such as his tax cut proposal and his plan to allow beer and wine sales at convenience stores (though it has not explicitly endorsed any candidate or party).

North99, for its part, has done a better job keeping its fig leaf intact. The group hasn’t explicitly been a cheerleader for Wynne or any other leader. Nor has it exclusively targeted Conservative politicians, as it regularly takes aim at the far-right movement in Canada.

Still, North99’s Ontario election-related content shows conspicuous similarities to the Liberal’s messaging. For instance, the group has has sounded the alarm over controversial PC candidates Andrew Lawton and Merrilee Fullerton, mirroring what the Liberals have been saying about them.

Tamara Small, an associate professor at the University of Guelph who researches digital politics in Canada, notes that freedom from party strictures affords such groups greater power to harness social media. The content that parties post tends to be dominated by sound bites from the leader and posts about the where the party leader visited, which Small calls “not terribly interesting.”

The outside groups have the leash to be less cordial in their messaging. As an example, Small points to one video from Ontario Proud calling out the “5 biggest idiots of the NDP” . “You can foresee that that is not going to be on the page of the Conservatives, regardless of whether they would like to write something like this or not,” she explains. “The way that the content is created is much more engaging and the levels of responsibility are quite different.”

Outside groups trying to influence elections with their own campaigns is nothing new. In past Ontario election years, the union-funded Working Families Coalition spent millions running TV ads attacking the Ontario PCs. These ads inspired legislation that now limits spending to $100,000 during the writ period and $600,000 outside of the writ period.

But Ballingall and Sharpe have managed to make a splash, despite starting from shoestring budgets. Both were political staffers specializing in digital media, and both worked for Navigator Ltd., a well-connected public relations and consulting firm.

Before he founded Ontario Proud, Ballingall held several political jobs in the Harper government. He was a video specialist for the Conservative caucus and ran communications for Jim Prentice, who was then the minister of western economic diversification, until 2009. Subsequently, he spent a year as Toronto city councillor John Parker’s executive assistant and two years working for Sun Media.

His desire to counter the Working Families Coalition’s well-financed attack ads is partly why he launched Ontario Proud in February 2016. Since then, the page has amassed nearly 360,000 likes, making it Ontario’s most popular political Facebook page, propelled in part by graphics that encourage supporters to share their content. Ontario Proud has also employed the use of videos dominated by text, meant to be easily viewed without audio as the video plays automatically on users’ news feeds while muted.

“I still wanted to do something to help out against the Wynne Liberals,” Ballingall told Maclean’s. “I knew my efforts would be best helped outside rather that inside the conservative movement, so I started Ontario Proud to do just that.”

RELATED: In the Ontario election, there’s a lot of change that’s hard to believe in

North99’s Facebook page has been up since August 2017 and has over 45,000 likes, less than Ontario Proud but more likes than the Ontario NDP and the Ontario Liberals have combined. It claims that it’s Canada’s “most active online progressive group.”

Originally from B.C., Sharpe made the move to Toronto after taking a consulting job with Navigator in 2012. In the lead-up to the Ontario Liberal leadership election in 2013, the Wynne campaign tapped into Sharpe’s digital-savvy. He was tasked with overseeing the campaign’s digital strategy, using tactics and tools pioneered by the Obama campaign. After Wynne became premier, Sharpe took a job running digital communications for the Premier’s Office.

Sharpe declined to be interviewed and directed inquiries from Maclean’s to North99’s website. In an email statement, he said, “we’re proud of the impact that our community of over 40,000 supporters has had on the election, whether it’s calling out Ford’s far-right policies that benefit the richest 1%, or pushing to end the sale of Ontario’s freshwater to international bottled water companies.”

In financial terms, North99 remains a relatively small operation. The group’s “about” page states that it operates on $1,200 to $1,400 per month in donations and is run entirely by volunteers. There’s an open Facebook page of about 300 members, where supporters can brainstorm content and strategy.

Ontario Proud’s success has moved it to a new level, giving it more of a semblance of a political party. The group has spent $60,000 in television ads and has teams of volunteers canvassing door-to-door and handing out leaflets. Ballingall is also at the helm of BC Proud, a similar group which focuses on B.C. politics.

“It showcases that a lot of the old media and old party politics is dying,” Ballingall said, commenting on the growth of both Ontario Proud and North99. “If you’re smart and you understand digital media, and you’re passionate, you can reach millions of people.”