The unbelievable things coming out of Jason Kenney's 'War Room'

Jen Gerson: Nothing demonstrates the parochialism and myopia of the people running Alberta Inc. more than their support for the Canadian Energy Centre 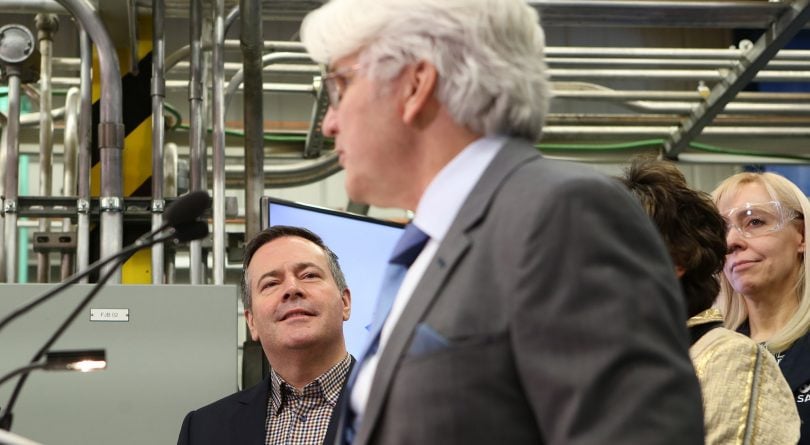 When the Alberta government promised to implement a “War Room” to address the myths and negative perceptions of the oil sands, I was not one of the journalists who feared this represented an imminent threat to democracy.

Despite Jason Kenney’s combative tone, what the government described at the War Room’s launch was actually an entirely basic communications strategy. Letters to the editor, requests for corrections, social media accounts dedicated to rapid-response fact checking; these are now common features of most corporate and government communications departments.

If I make a mistake in a column, I expect to hear about it. I have received reasonable requests for clarifications or corrections from such organizations, and, if they’re right, either myself or the outlet I work for is usually pretty happy to grant them. If I’ve really screwed up, I’ll try to thank them for correcting me. These relationships are not always cordial. Nor are they necessarily nefarious.

Initially branding this approach as a “War Room” was needlessly aggressive and counter-productive—public relations departments usually prefer to build professional relationships with the media. Sometimes that is not possible.

The point of this “War Room” wasn’t just to act in a traditional communications capacity; it was also to bolster the morale of a province that felt it, and its key industry, had been kicked under by inaccurate media profiles and misleading comparisons to the horrors of Mordor.

The War Room badge was theatrical, if not wise.

However, while I found myself not-particularly-perturbed by Jason Kenney’s bolshie media strategy, I was operating under the assumption that such a thing would be competent.

To head the War Room, the Kenney government hired Tom Olsen, a former newspaperman with long ties to the old Progressive Conservative government. Olsen—who has made unintentionally hilarious statements like “We are not about attacking; we are about disproving true facts”—was perhaps better known just prior to this because he lost the seat of Calgary-Buffalo to former NDP finance minister Joe Ceci in the last election.

So he was picked over countless other qualified potential candidates to helm the War Room, which was rapidly rebranded into the Canadian Energy Centre.

RELATED: The outsized meaning of the Frontier oil sands mine

Its employees were described as “reporters”, to the chagrin of the Canadian Association of Journalists. Olsen himself said that the CEC should be considered akin to a new media organization. For the lulz alone, I look forward to their application to the federal government’s newspaper bailout fund, but I digress.

The CEC had barely begun its elevated work before its newly minted logo was found to have been plagiarized. (Next time, may I recommend Fiverr?) Have I mentioned, yet, that this organization was endowed with a $30 million-per-year budget?

Whatever pretense the Canadian Energy Centre had to being a professional communications organization was muddied on Wednesday when it tweeted a series of nonsense strung together with digital miasma and intellectual sticky string.

In response to a report in the New York Times about oil sands divestment, the Canadian Energy Centre hit back, by referencing the infamous former New York Times reporter and fabulist “Jasyon Blair” (sic), and noting the paper’s apparent record of anti-semitism. The Twitter account also made an incomprehensible reference to the SNC-Lavalin scandal.

From Jayson Blair to anti-semitic accusations to gold mines are bad, to bad apostrophes to SNC Lavalin reference. This war room/@CDNEnergyCentre shitpost thread on NY Times’ feature on international $ ditching oil sands has it all. pic.twitter.com/03VnrCUfhp

To his credit, Olsen apologized for this bit of digital vomit and, hopefully, swatted his over-zealous social media intern on the nose with a thin copy of the rolled up newspaper he no longer works for.

Let’s, for a moment, avoid the superfluous little side debate about whether the Times‘ piece was good or fair.

Someone, somewhere in the Alberta government needs to hear what I’m saying and it ain’t going to be pleasant.

There is nothing that demonstrates the profound limitations, parochialism and myopia of the people running Alberta Inc. right now than the fact that someone in the most senior levels of government still thinks that the Canadian Energy Centre is a good idea.

It’s not good. It’s not smart. It’s not competent.

Tweeting mean things at the New York Times is not discouraging anybody from saying bad things about Alberta. The righteous ire of Premier Jason Kenney does not inspire fear in the halls of global finance. Nothing that the CEC organization is producing is persuading anybody. And, increasingly, it’s not even very good at taking potshots at the Great Enemies of Industry for the gratification of an angry electorate.

I have no objection to an aggressive communications strategy—although I can’t help but wonder how much more effective that $30 million would be in the hands of a major communications firm that has contacts with the international corporations and governments that this province is so desperate to win over.

But any communications strategy—whether in-house or out—needs to ask some basic questions of itself: Who is its target audience? What are its key objectives and messages? Which media will it target? What tone will it adopt, and why? And what are the measures by which it will determine its success?

I’m sure there was a good reason that the government of Alberta couldn’t trust basic communications functions to its horde of perfectly qualified in-house communications staff. Due to some clever corporate jiggery pokery, the CEC has incorporated itself just outside the hallowed walls of the government, thus making it immune to the Freedom of Information legislation that could help the public decide whether this money is being spent wisely.

So I will have to trust you, my invisible advocate in the Alberta government, to ask these kinds of questions.

What, exactly, is the purpose of this thing? Is the Canadian Energy Centre a government news-esque pamphlet? If so, how many people are reading it?

A communications outfit with a generous budget ought to be able to produce a detailed strategy demonstrating audiences of persuadable targets broken down by demography and region. After a few months in operation, it should have identified key messages that are most effective with those audiences. Can the CEC provide this?

Or, perhaps, the CEC wants to act as government-sanctioned social media sh–posting. It wouldn’t be my recommendation, but there are ways to do this effectively. It would need to be cutting, clever and witty, with Twitter and Facebook posts garnering viral attention.

What is the hard-cash value of the earned media it has generated to date? Has the CEC consulted with the best sh–posters in this field? (Nix that, I know they haven’t.)

Or, perhaps, the CEC wants to limit its role to correcting misinformation and rapid response online. Fine, fine.

How effective has it been? It’s not hard to provide metrics—concrete metrics—to get a feel for the outreach taxpayer money is buying. As of Tuesday, the CEC could boast 5,647 followers on Twitter. A few more than 1,500 people had liked it on Facebook. For $30 million per year that is profoundly unpromising.

I’m on the outside of all of this, so it’s entirely possible that the CEC will be able to provide detailed and sophisticated responses to someone with enough power to demand them. But the dog’s breakfast they’re producing to date makes me wonder if this organization has even asked some of these questions, much less answered them.

Communications—and its shabby cousin journalism can be included in this—is a brutal game in which effectiveness and reach are tracked and measured, often ruthlessly.

If the CEC is anything other than a make-work sinecure for a buddy of the old boy network, it would be nice to see it.