Paul Wells: Catch up Britain—there will be Brexit and there won't be a deal, and the name for that is a no-deal Brexit 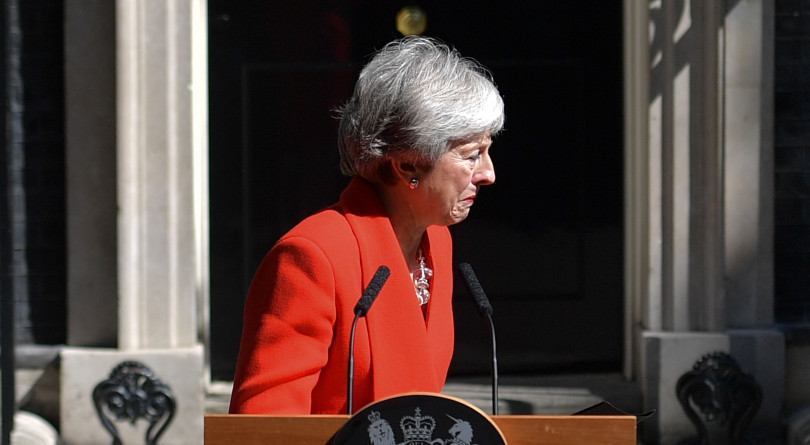 May announces her resignation outside 10 Downing street in central London on May 24, 2019 (DANIEL LEAL-OLIVAS/AFP/Getty Images)

Theresa May’s resignation as Britain’s prime minister is not helpful, because it fires the starter pistol on yet another two months during which Britain’s elites will keep acting as though personalities make any difference in Brexit’s outcome.

Actually, that’s optimistic. It’ll take two months to pick a new Conservative leader. But then that person will spend yet more months trying to exert the force of his or her personality before realizing he or she faces the same stark choices May faced three years ago. This whole story is about the rest of the world waiting for Britain to catch up. Canadian Anglophiles live their lives assuming Brits are more serious about serious things; the lesson of Brexit is that this assumption has no modern basis beyond U.K. Tories’ diction and wardrobe.

Personalities often matter a lot in politics, especially when voters’ opinions aren’t entrenched or when government has a lot of room to choose among policy options. It made a difference whether Margaret Thatcher was prime minister in her time, or Tony Blair in his. But when May got the big job, in the summer of 2016, public opinion on Brexit was baked in. And Britain’s manoeuvring room was tightly constrained by the fact that it was dealing with a dance partner, the European Union, which itself has very little room to manoeuvre.

That first point, about public opinion, has escaped many Brexit observers outside the U.K. I keep hearing from Canadians who assume a second referendum would show a collapse of support for Britain’s departure from the EU. There’s no collapse. A YouGov poll three weeks ago showed Remain four points ahead of Leave in a hypothetical second referendum. The same firm measured a six-point Remain advantage two months before the 2016 referendum. And polling on the question assumes an organized and effective political constituency for a second referendum. There is none, in any party.

May has always said Brexit must mean Brexit; her internal Tory opposition was mostly from harder-line pro-Brexit factions; Labour leader Jeremy Corbyn has been all over the map and can’t bring his party with him; and the net effect of the past few months of chaos has been to strengthen the political hand of Brexit hard-liners, not of Remain irredentists. None of this is what I’d have wanted, but I’m stuck with the facts.

READ MORE: Dazed and confused, it’s Britain in the age of Brexit

As for the EU’s limited manoeuvring room, that part has been hard for Brits to grasp. Even Remainers often talk as though the EU could deliver more lenient terms for Britain’s departure if the Brussels Eurocrats were in a better mood, or if they were sufficiently charmed or bullied by the right sort of U.K. prime minister.

It isn’t so. The European Union is a single market, based on the “four freedoms” of the 1957 Treaty of Rome: free movement of goods, services, capital and people. You can’t pick and choose among them. If labour can’t move freely among EU member states, the market has no meaning. If goods and capital can’t move under commonly-agreed terms, there’s no union. You’re in or you’re out.

That’s not the vengeance of Brussels, it is the only way the EU can work. Britain is free to decide these things don’t matter, but the stewards of the single market have no such freedom. They have to protect the EU’s internal market, which means they can’t let Britain be part-European, part-something else.

Significantly, EU leaders greeted news of May’s resignation, not by launching into more or less sincere odes to her personality, but by seeking to remind everyone that the fundamental truths still apply, no matter who’s in charge. France’s Emmanuel Macron called for “rapid clarification” of Britain’s stance, and said “the principles of the EU will continue to apply, with the priority on the smooth functioning of the EU.” The Dutch PM said “the deal reached between the European Union and Britain for an orderly Brexit remains on the table.” That, in other words, it is substantially the only deal on offer. And Jean-Claude Juncker, the EU Commission president, said he will “equally respect and establish working relations” with a new British PM, “whoever that might be.”

The choices now facing Britain are stark and they should be familiar, because they were the choices facing it the day after the 2016 referendum. Britain can remain in the single market by cancelling Brexit. Or it can remain substantially in the single market by abjectly accepting most economic policy set by the remaining 27 EU members, without itself having any say in what that policy will be. That’s pretty much the deal May reached with the EU last year, after trying for two years to find something less ignominious.

Or it can crash out of the EU with no bilateral treaty. That’s the so-called “no deal” that Brexit hardliners wish for, and many others fear. It would mean customs posts and cargo inspections at all border points between Britain and the EU. Trade would erode and investment that formerly went to Britain as an entry point to Europe would now go elsewhere.

The appeal of no-deal Brexit is that it would give Britain freedom to establish trade relations on its own terms with third nations. The plucky Brit working class would drive a renewed British engine of industrial progress, just like in the great old days, fast outstripping the lazy continent. This is essentially the wet dream of Jacob Rees-Mogg and other Brexiters whose tailors and diphthongs so enthrall the Canadian Tory Brexit-envy legions.

My general problem with this yearning for no-deal is that I can’t seem to find the untapped markets for British pluck and industry anywhere in the world. Britain would lose a fraction of its access to the EU market, and in return it would trade more freely with—who? Canada and Australia, a fraction Europe’s size and oceans away? Donald Trump’s zesty free-trading United States? China? And on what basis would plucky Britain get ahead, freed now of Brussels’ shackles? Degraded labour and environmental standards? Cheaper goods than Slovakia can produce, or India, or China again, or Africa? Smarter goods than Germany makes, or Japan?

That’s the general problem. The specific problem, of course, is that one of the borders between the U.K. and the EU—irrelevant while Britain is in the single market, suddenly very significant once it’s out—runs between Northern Ireland and the Republic of Ireland. That’s the sort of nagging detail you can ignore if you’re a critic of Theresa May, but it becomes harder to skip once you become her successor.

Parliament did vote in March to reject a no-deal Brexit, but it was a bit like voting to reject rain tomorrow: the rain doesn’t care. If Brexit isn’t revoked—and there is no mechanism currently in place for doing so—and if May’s deal with a tightly-constrained EU is abandoned by her successor, then there will be Brexit and there won’t be a deal, and the name for that is a no-deal Brexit.

It took May half her time at No. 10 Downing Street to figure that out, and she spent the rest of her tenure trying to explain it to everyone else. In all likelihood, her successor will believe his wit or his charm will spare him from making these stark choices. At least at first. But the rain doesn’t care.