The Throne Speech was a lot like a stereotypical Christmas letter

Shannon Proudfoot: All this symbolism and positive spin, only to find out that by next year the roof will be blown off your house 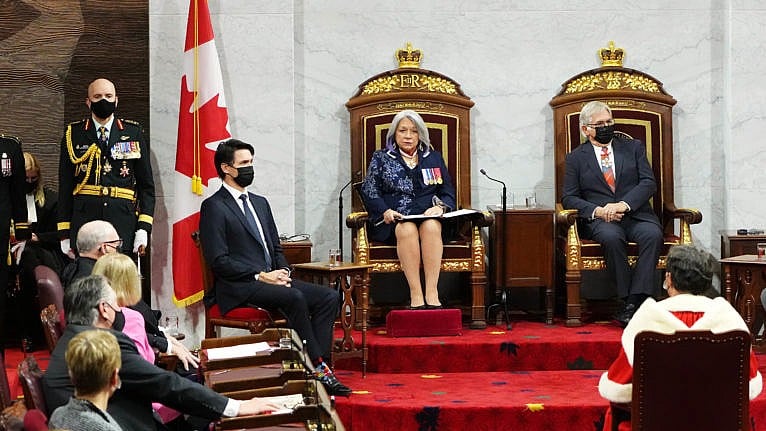 A Speech from the Throne is a curious thing.

It functions as a mission statement at the opening of a new session of Parliament, so it is effectively a government talking to itself and about itself to the public at once. In its modern incarnation at least, it carries an infomercial subtext in quietly extolling the good already accomplished and feats yet to come, but because it is delivered by the governor general as the Queen’s representative, that’s all tucked behind a genteel non-partisan veneer.

Long on pomp, symbolism, and positive spin, short on specifics or the blunt acknowledgement of any unpleasantness, the Throne Speech perhaps resembles nothing so much as a stereotypical family Christmas letter: Dear family and friends, here is what we celebrated this year and what we hope for next year. In those things, job losses are recast as a “change of career,” mortal illness is nodded at with hope and optimism, and the strain and messiness of family life is airbrushed into tidy, appealing vignettes suitable for someone else’s fridge door.

The Throne Speech version of this that Mary Simon, the newly installed governor general and the first Indigenous person to hold that role, delivered before a pandemic-shrunken Senate on Tuesday arrives at a strange moment for the government and the country. But then, there are not many moments that have not been strange in the last 20 months.

Prime Minister Justin Trudeau dissolved Parliament to trigger an election in the summer because polls looked friendly and the pandemic seemed to be receding from view. But then a new virus wave crested and voters returned a nearly identical Parliament in which everyone had clearly been told to go sit in a corner and think about what they’d done. Now, everything hovers in the space between what we’ve all just been through, and when and how we can realistically—in the Liberal government’s preferred parlance—”build back better.”

So this was not a Throne Speech that could triumphantly claim a new public mandate with a straight face or one that claimed to know what was going to happen next, because we’d collectively learned some harsh lessons about that before.

Indeed, the speech opening that Simon read nodded at how you can write a lovely Christmas letter while blissfully unaware that by the time next year’s rolls around, the roof will have blown off your house. “In 2020, Canadians did not know they would face the crisis of a once-in-a-century pandemic. But, as always, no one should be surprised by how Canadians responded,” she read, also acknowledging the immense suffering and damage in flooded British Columbia at the moment. “We adapted. We helped one another. And we stayed true to our values.”

The speech seemed to be trying at once to grapple with this strange nobody-knows moment and to deny it. Each of the section headings declared “this is the moment” to do something big: build a healthier today and tomorrow, grow a more resilient economy, for bolder climate action and so on.

The issue for which the government took the most heat from the opposition Conservatives during the campaign, and which is certain to be a dominant theme over the next several months, got a slightly defensive treatment. “Inflation is a challenge that countries around the world are facing,” the speech read. “And while Canada’s economic performance is better than many of our partners, we must keep tackling the rising cost of living.” To that end, the government says it will focus on “two major priorities” in the form of housing and childcare.

A rash of sexual misconduct allegations in the highest ranks of the Canadian military gets delicate mention by way of a commitment that “fighting systemic racism, sexism, discrimination, misconduct, and abuse, including in our core institutions, will remain a key priority.” The government wants to “go further, faster” in fighting climate change in such a way that “no worker or region will be left behind,” including the creation of a new National Adaptation Strategy.

There have now been four Throne Speeches delivered over the course of Trudeau’s government. Each one, in retrospect, carries the sense of an unseen threat that was about to drop out of the sky.

The 2015 version overflowed with shiny optimism and lofty rhetoric about who Canadians were and what they were capable of, alongside a grocery list of specific promises drawn from the government’s sweeping majority win. The presidency of Donald Trump and the malevolent chaos that would accompany it had yet to be contemplated. The 2019 Throne Speech, delivered after the government was demoted to a minority, was distinctly more grounded and dour, but it’s still from a world that had no idea it was about to be turned off like a light switch and stay that way for nearly two years.

The 2020 Throne Speech arrived after Trudeau prorogued Parliament amid the heat of the WE Charity scandal—in a tidy bit of a dramatic symmetry, this was, verbatim, a thing his first Throne Speech pledged never to do—and was entirely preoccupied with the COVID-19 crisis. But even that speech seems like a photo of someone in the last second before something terrible happens that they can’t yet see.

The 2020 speech in no way suggests the pandemic battle is over—it’s worth remembering that when it was delivered just over a year ago, none of the vaccines that now protect three-quarters of Canadians had been approved—but cites with sad horror death statistics that have been dwarfed by the carnage and grief since: 9,000 Canadians at the time, but nearly 30,000 dead by now.

Still ahead in that moment, too, was the discovery of thousands of unmarked graves of children who died in residential schools, though advocates would argue that the underlying horror to which they pointed never should have been a surprise or a revelation. “This year, Canadians were horrified by the discovery of unmarked graves at former residential schools,” Simon read on Tuesday, adding, “we know that reconciliation cannot come without truth.” She went on to list the government’s pledges to create a national monument to survivors and appoint a special interlocutor “to further advance justice on residential schools.”

Large portions of this speech were delivered by Simon in careful, laborious French. It was a clear nod of effort to the fact that, as she stated when she was named to the post, she is bilingual in English and Inuktitut, not English and French, given the path of her life and education prior to becoming Canada’s first Indigenous governor general.

Because the format and tradition of the Throne Speech is inherently formal and dry, even the briefest glimpse of humanity or emotion leaps off the page and from the floor of the Senate. “This decade is still young,” Simon read near the end of the speech, in French. “With compassion, courage and determination, we have the power to make it better than how it started.”

This Throne Speech was a very polished and sanded version of reality that couldn’t help glancing at the painful, unpredictable world outside, because now it knows there is no telling when it will stomp through the door.