Tory on Doug Ford's plan to slash city council, taking on a new electoral opponent—and the difference between the premier and his late brother, Rob 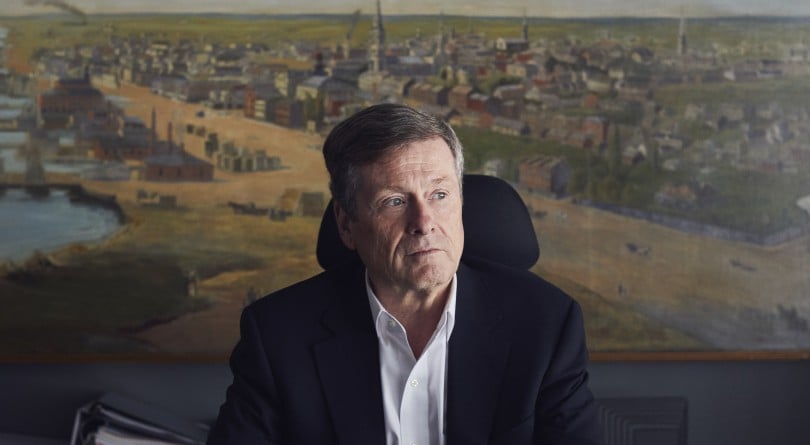 The huge bay window of John Tory’s office looks out over one of Canada’s great public spaces, Nathan Phillips Square in downtown Toronto. The view is one of the few perks of a job that’s suddenly beset with trouble. Tory spoke to Maclean’s about his long friendship with Doug Ford, the new Ontario premier who wants to cut the number of Toronto city councillors nearly in half; about his challenger in this fall’s mayoral election; and about why it’s often better to bargain than to fight. This interview has been edited for length and clarity.

Q: The Ontario premier, who wants to cut the number of councillors from 47 to 25, has been saying that everybody wants fewer politicians rather than more. What’s wrong with his logic?

A: I’m publicly quoted many times as having said I’ve never run into a single person—or maybe one—who said we need more politicians. I think what’s wrong with what he’s done is that he took that view, which actually is shared by others, and just acted on it without ever asking anybody for their opinion, without ever seeking any input as to how you might go about it. I would have thought maybe the first person he might have turned to would be the mayor and the councillors to say, “What do you think about all of this?” I don’t care about that. I’m a big boy and so are the councillors, big boys and girls, but the notion that the people should have nothing to say . . . Frankly, if he had run in the election explicitly on saying I’m going to do this, I would have said, “Well, you’ve got a mandate so I guess”—how can I argue with that? But he didn’t.

Q: You had what you described as an animated phone conversation with the premier the night before this was officially announced. What did you tell him?

A: I said to him I thought it would create—I’ll use the more polite version of this—a firestorm of criticism for the fact that it was being done utterly without any consultation with anybody. It was never discussed during the election. I just thought that was wrong.

Q: You petitioned the province for a referendum on these changes. Do you think you’re going to get a referendum, and do you know how it would turn out?

A: Well, that’s two interesting questions. Do I think I’m going to get it? It’s hard to say. It’s the ultimate consultation. The campaign itself informs people, then they have a vote. I think that would be a healthy exercise. The second part is that if you look at the consequences of amalgamation, which was done much the same way—there was, at least, time for there to be a debate—in the aftermath there was a fairly precipitous decline in the fortunes of the Progressive Conservative party in the city of Toronto. They didn’t win one single seat in the city of Toronto for 15 years after that.

I don’t think that was solely the result of amalgamation, but I think it was a big factor in it—people said this government has shown a certain degree of disrespect for the people of Toronto by going about things in this way. We’re going to assume they’re not on our wavelength and not vote for them. And they didn’t.

Q: There’s got to be 22 councillors on Toronto council that you would like to not see again.

A: No, I wouldn’t say that, actually. Look at the dramatics in the Ontario legislature the past couple of days. They make this place look orderly. I would just say that’s an oversimplification of all this. It wouldn’t be my attitude that there’d be people I’d like to see gone. There are some who are, I think, more productive and constructive than others, but if you have that kind of motivation to say, “I’m going to breathe a sigh of relief and say good riddance to half these people,” then I think you’re thinking about this the wrong way. I start from this premise: Aren’t you supposed to say what’s going to be best for the good governance of the city of Toronto, working in partnership with the other governments, and I alone or the premier of Ontario alone or the Prime Minister of Canada alone does not have that answer.

RELATED: The secret no government wants you to know: No leader has a ‘mandate’

Q: That spirit of collaboration, that requirement for collaboration, does it keep you from appearing as a fighter for Toronto in the way that a lot of Torontonians would like? Does that leave you open to attack in an election year as a man who doesn’t fight for Toronto and is easily replaced with somebody more—

A: I would say this to you. What have I done since this started? I made a strong statement saying this was rammed down our throats. It was meddling in the middle of our elections. It was changing the rules in the middle of the game. I took great offence at that. I spoke as strongly as I possibly could to the premier directly on the one occasion we’ve talked about this, on the night he told me it was going to happen the next day. After that, I went to city council and I moved the motion on a referendum. I think most people would understand that I’m putting my views forward very forcefully about what I consider to be a thoroughly inadequate, indefensible, unsatisfactory process. But I also have an obligation to make sure I conduct myself in such a way that I can continue to represent on a broad range of other fronts the interests of the citizens of Toronto. It’s a balancing act. I don’t think I’ve been unclear at all in my views about the process here.

Q: You find yourself facing an opponent in your bid for re-election, Jennifer Keesmaat, the former city planner for Toronto. Do you know her? What do you make of her?

A: I worked with her here. I think she’s a very smart, accomplished person. I’ve seen the first pronouncement come out, saying we should secede from Ontario, and then she said she was going to sleep on it and the next day said yes, I was right the first time, we should secede. I look at that and say: what kind of answer is that? I think the election will come down to a series of issues that, as usual, people have different opinions on, but I fully respect the fact that she came into the race.

Q: For several months it looked like you had a rare alignment of levels of government regarding Toronto. You had the mayor, a Liberal premier and a Liberal Prime Minister who wanted to invest in Toronto and coordinate their efforts. Is that era over?

A: I’m prepared to say that this was a rocky beginning in terms of the process that was followed here, but I’m not prepared to say that all is lost and we’re going to throw in the towel. I’ll stand up for this city on housing, on transit and a host of other issues. That’s my job. I will work collaboratively with the people who are elected at the other orders of government because that’s also my job. I don’t think I’m a difficult person to get along with. I expect my city to be treated respectfully, to be consulted on things, which I’ve found not to be a problem most of the time. I think those are reasonable expectations.

Q: You and Doug Ford go back several years.

Q: What was the basis of that friendship?

A: It was more what I’ll call a political friendship. I knew his father because he was a member of the legislature and met Rob and Doug and all the family, Randy, Diane the mum. When you meet one Ford, you meet them all. That’s the way it works. They’re very much a political family and a family. I admire that. When I ran for mayor in 2003, they supported me. I thought I was going to lunch with Rob and Mr. Ford Sr., and when I showed up to lunch they were all there. It was interesting because at the conclusion of the lunch, after I was put through my paces, Diane spoke on behalf of the family and said: “We’ll support you this time, and after you’re finished being mayor then it will be Rob’s turn.” Rob was by then just a first-term councillor, so nobody had any particular contemplation that he would be mayor, but lo and behold, I didn’t make it in 2003, but Rob did [in 2010].

Q: I take it Doug is more of a professional politician than his brother was, and I mean that almost in a complimentary way.

A: I’m not sure the premise of the question is one that allows me to say yes or no. I think Rob was quintessentially a person who thrived on being with people and taking little notes of their problems and taking their phone calls and so on. Doug is more interested in making decisions. They’re different people, but both of them are outside the mould.

Q: What story would you tell about Toronto at this period in its history? Every day is filled with administrative decisions, but at some level you also have to keep in your head some image of where society is going. Where is Toronto these days, and where is it headed?

A: I’ll tell you the story from yesterday. As you say, there are a thousand stories you could tell from a thousand days. I took great encouragement yesterday from the paramedics’ graduation. I think there were 31 of them. It was a class that was as diverse as Toronto is. For example: a doctor from Iran who for 12 years had been a medical doctor and had the trouble you’ve written and read about so many times about getting his qualifications recognized here, which brought him into the program. It took people from Jane and Finch and Regent Park, some of the poorest neighbourhoods in Toronto, and brought them into this program for one of the great jobs you can have in our civic administration, to be a paramedic. It’s a brave and courageous and skilled job. If you asked me when I knew we were on the right track with some of the stuff we’re doing, it was when I saw those people come up yesterday to accept their certificates. We didn’t treat anybody any differently. Our challenge is to repeat that kind of thing over and over and over again.