It isn’t dead, but Ottawa’s purchase could be resting a long time as it navigates a maze of challenges 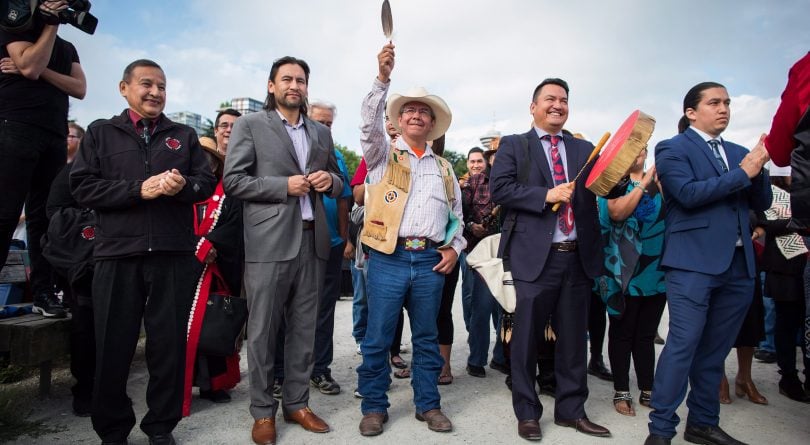 Coldwater Indian band Chief Lee Spahan, centre, raises an eagle feather before he and other First Nations leaders respond to a Federal Court of Appeal ruling on the Kinder Morgan Trans Mountain Pipeline expansion, during a news conference in Vancouver, on Thursday August 30, 2018. In a unanimous decision by a panel of three judges, the court says the National Energy Board's review of the project was so flawed that the federal government could not rely on it as a basis for its decision to approve the expansion. (Darryl Dyck/CP)

If Trans Mountain had agreed to a two-kilometre detour for its planned 980-km pipeline expansion project, the Coldwater Indian Band might have been fine with it. It would have moved the risk of a bitumen spill away from the First Nation’s aquifer. But that would have taken nine months and $53 million to construct, regulatory documents show. The pipeline developers preferred a route that skirted east rather than west of the reserve in B.C.’s south-central interior—for $44.2 million and three months of construction, as well as two fewer river crossings.

In the face of Coldwater’s concerns, the National Energy Board (NEB) recommended a hydrogeological study. The band was unmoved, but when it reiterated its fears for the safety of its drinking water, the federal government’s representatives took notes and recommended nothing further. Later, in a decision that resonated across the country, the Federal Court of Appeal itself took note of that inaction and quashed Ottawa’s approval of the pipeline.

“Right from the beginning, we said water is life. Water is sacred,” Coldwater Chief Lee Spahan said, clutching an eagle feather on that August morning as he and fellow Indigenous pipeline opponents celebrated their court victory. He’ll bring that message back to the table when Ottawa convenes do-over pipeline consultations in the coming months. The outcome of those talks—and dozens more like it along the Trans Mountain path—will determine whether 980 or 982 or any kilometres of new pipeline get built. And on that ride a vast array of competing interests—the fates of governments; the fortunes of First Nations; the health of the environment and the future of Western Canada’s once-thriving oil industry.

When three appellate court judges blocked the Trans Mountain expansion, just as Ottawa was completing its $4.5-billion purchase of Kinder Morgan’s existing pipeline and plans to twin it from Alberta to Burnaby, B.C., they suggested those blueprints need not gather dust for long. Coldwater and five other First Nations litigants had concerns that were “specific and focused,” and the remedial dialogues could be the same, the judges wrote. Fresh consultations, they added, could be “brief and efficient” yet “meaningful.” The decision also said the NEB, the country’s arms-length energy regulator, must reconsider the project’s environmental assessment and factor in how increased oil tanker traffic will affect marine life. But the court concluded that government may specify a time limit for that second review.

Ottawa gave the NEB until Feb. 22, 2019*, to file an amended report with any potential extra protections for the endangered group of West Coast killer whales; hearings began in November. But on the Indigenous consultations the government itself must redo, it has set no timeline—and no interpretation of what “brief and efficient” entails. The original round of consultations took seven months, and most observers suggest the renewed phase shouldn’t take longer, meaning the Liberal cabinet might be ready to give Trans Mountain fresh approval before the fall election. Project CEO Ian Anderson suggested that mid-2019 approval puts construction on track for 2022 completion. But Natural Resources Minister Amarjeet Sohi won’t hint at a date or even a year in his timetable.

Rushing the process, Sohi told reporters in Calgary in November, might undermine the government’s intent to show good faith, and its desire to “avoid future challenges” to the pipeline: “We cannot and we will not cut corners on this project.”

The Trudeau government didn’t think it was cutting corners when it last consulted First Nations on Trans Mountain in 2016. After judges overturned the Harper government’s approval for the now-cancelled Northern Gateway pipeline because of a rushed and inadequate process, the Liberals insisted their Trans Mountain dialogues would allow for more time and thoroughness. But quantity is no replacement for quality, the Federal Court of Appeal ruled in its latest rebuke—not when Ottawa showed no willingness to accommodate Indigenous misgivings. This time, the government aims for bigger and better consultations. It will double the capacity of its consultation teams, Sohi says. “Be assured that our teams will have the mandate to offer accommodations where accommodations are possible.”

MORE: The Liberals own the Trans Mountain court loss as surely as they own the pipeline

That’s where Coldwater’s aquifer comes in, along with other grievances the court said require attention. They range from comparatively simple (the Stó:lō people wanted more details about impact monitoring near a burial site) to far-reaching (Stk’emlupsemc te Secwepemc Nation wanted to levy a resource development tax in its territory). But the standard that Ottawa must meet is not full adherence to Indigenous demands or bust. It must demonstrate openness and seriously consider adding mitigation, legal experts say.

To oversee consultations in Round 2, Ottawa has appointed Frank Iacobucci, the former Supreme Court justice who was the Ontario government’s lead negotiator with First Nations communities on the Ring of Fire mining megaproject. But Ottawa isn’t seeking—nor did the court demand—consent from all affected First Nations, though that’s the standard that some Indigenous leaders are sticking by, and it’s contained in the United Nations Declaration on the Rights of Indigenous Peoples that the Trudeau Liberals have embraced. Dave Wright, a specialist in natural resources and Indigenous law at the University of Calgary, notes Sohi’s meticulously calibrated references to fulfilling constitutional obligations: “They’re very careful to not say we’re going to do all this stuff and we’re all going to agree at the end of the day.”

Agreement, at least with some First Nations, seems an impossible goal. Tsleil-Waututh First Nation, whose traditional territory sits at the pipeline expansion’s terminus, has vowed to oppose it until the government gives up. “If we have to, we’ll go to the Supreme Court and we’ll win,” says Reuben George of Tsleil-Waututh’s Sacred Trust initiative, set up to oppose Trans Mountain. And that’s just for starters: Ottawa is renewing talks with all 117 affected Indigenous groups along the pipeline corridor and, even if its accommodation proposals satisfy some of the original litigants, it’s possible other First Nations will find flaws and sue to overturn the next federal approval, says Eugene Kung, a staff lawyer with West Coast Environmental Law.

By mid-November, all First Nations were notified by letter that there would be talks, but they hadn’t started; Ottawa was still assembling consultation teams, says Sohi. But as the parallel NEB hearings over marine life impacts got under way, Indigenous groups were making familiar complaints about restrictive timelines and hearing access, and accusations of the same short-circuiting the judges found problematic. “What baffles me is why they don’t start aiming for higher than the floor,” Kung says.

RELATED: The Trans Mountain expansion isn’t dead. But delays will be costly.

Perhaps, but even as those talks begin, Ottawa and an increasingly anxious Alberta government are all too aware of the plunge in the price of Alberta heavy oil resulting from swelling supplies and too few pipelines to ship through—a decline hammering both the economy and government revenues. Companies are curtailing production and expanding oil-by-rail shipments as short-term fixes, hoping either Trans Mountain or Keystone XL—itself thrown into limbo by a U.S. judge’s ruling—will eventually come to pass. In the meantime, the delays have sapped investor confidence: capital raised by Western Canada’s oil sector in 2018 was below $1 billion by November, compared to $13.5 billion in 2016, according to Jackie Forrest, senior director of ARC Energy Research Institute. And warnings are being sent to the highest levels of government: “Market access is critical to an investment in a Canadian energy company, and if that continues to be under threat, global investors will seek opportunities elsewhere and Canadian companies will be further impaired,” wrote Darren Peers, analyst with the $1.7-trillion global investment fund Capital Group, in an October letter to Prime Minister Justin Trudeau.

For the PM and his government, it is the essence of a dilemma. On one hand, they face impatience from investors and oil patch workers, keen for assurance that pipelines are on their way and likely to lose faith in a key Canadian industry if disappointed. On the other side are Indigenous communities and environmental groups who want their concerns heard and addressed, many of whom are likely to sue and resist if left unsatisfied. Even if Liberals can restart the Trans Mountain expansion’s construction in 2019, the legal challenges, protests and potential pitfalls will continue for years to come.

CORRECTION, Dec. 17, 2018: An earlier version of this story misstated the deadline the NEB gave Ottawa to file a report regarding protections for West Coast killer whales.