What did Conservative Party leader Andrew Scheer say after the election on Oct. 21? Find out here. 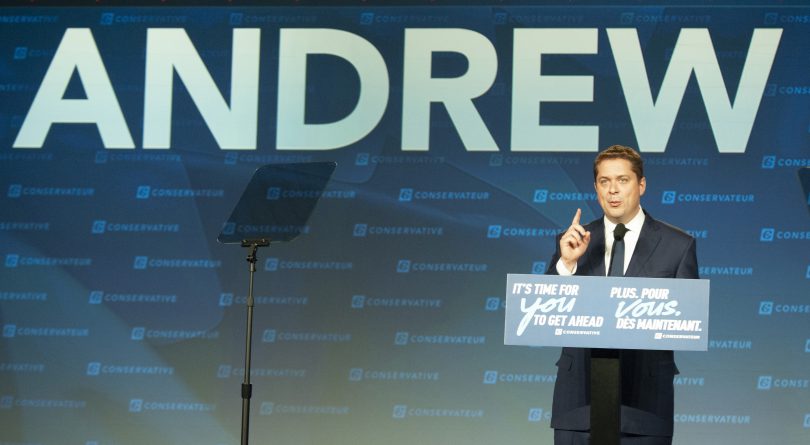 Scheer addresses his supporters in Regina, Sask., on Oct. 21, 2019. (Photograph by Mark Taylor)

First and foremost, I want to thank the voters of Regina-Qu’Appelle for once again electing me as your Member of Parliament.

And thank you to all the volunteers who worked hard in the campaign office, who knocked on doors and put up signs. Joan Bayliss, thank you so much for running a campaign.

Being a member of Parliament for Regina-Qu’Apelle is an honour that I will never take for granted, and I will work hard every day to repay the trust that you have put in me. I also say thank you to all 336 Conservative Party candidates for your hard work during this campaign. And a special note of congratulations for my two new colleagues here in Regina—Warren Stanley in Regina-Lewvan and Mike Kram in Regina-Wascana!

And to everybody across the country who joined our Conservative team over the last 40 days, whether you knocked on doors, put in lawn signs, made a donation, or simply told your friend and neighbour why you were voting Conservative. Our party is strong, it is united, and we are on the march ladies and gentlemen.

We ran an excellent campaign, from top to bottom, and for that, we should all be proud.

And finally, on a personal note, I want to thank my wife, Jill, and our five children, who have been so supportive during all the long weeks and months on the road. No matter where public life has taken me or will take me, the greatest honour of my life is to be a husband and dad.

I have just spoken with Prime Minister Trudeau to congratulate him on winning the most seats. And my message tonight is that the strength of our democracy is not only measured by the ballots we cast, but also by how we move forward after their counting.

(In French) My friends, I want to thank our 336 other candidates of the Conservative Party for their hard work during this whole campaign. I spoke earlier tonight with Justin Trudeau and I congratulated him for winning the largest amount of seats tonight. And the strength of our democracy is not only measured by the fact of voting but also in the way that we continue to go forward once those have been counted.

And while tonight’s result isn’t what we wanted, I am also incredibly proud. Proud of our team, proud of our campaign, and proud of the bigger and stronger Conservative team that we will send to Ottawa. Now, there are still a number of really close races, so we don’t know for sure how many more Conservatives Canadians will send to Ottawa tonight, but what we do know is that after the 2015 election, when Justin Trudeau looked unstoppable, when all the pundits and experts said it was the beginning of another Trudeau dynasty, that he would have eight or even 12 years in power. But tonight, Conservatives have put Justin Trudeau on notice. And Mr. Trudeau, when your government falls, Conservatives will be ready and we will win.

(In French) Although I am disappointed tonight, I am incredibly proud of our team of our Conservative movement. Remember, friends, the night in October 2015, It was predicted that Justin Trudeau would run the country for eight or 12 years. Nobody was giving us the slightest chance. But tonight, we’ve put Mr. Trudeau under notice. His leadership is damaged and his time in government will soon end. And when this moment will come, Conservatives will be ready and we will win.

The fact is Canadians have passed judgment on this Liberal government. Now, not only have they lost over 20 seats, but Mr. Trudeau has also lost votes and lost support in every region of the country. And ladies and gentlemen, we knew this was never going to be easy, but nothing worth achieving ever is. Only once in the history of this country has a first-term majority government been defeated. But we’ve also made some history of our own tonight. Tonight we have accomplished what only two parties have ever done before by holding a first-term majority government to a minority.

We have picked up seats and support in almost every region of the country, and at the time I walked onto the stage, we are leading the popular vote, ladies and gentlemen. More Canadians wanted us to win this election than any other party. And remember, remember 2004, Stephen Harper’s first election, he erased Paul Martin’s majority, and then went on to lead a conservative government that lasted for nearly 10 years.

And now we’re heading back to Ottawa with a much bigger team, with more support from coast to coast. And with an endorsement from the Canadian people that we are the government in waiting.

(In French) My friends, I want to speak to the Quebec nation. With my Quebec team, we will continue to work for you, the values, the conservative values are Quebec values, and Quebec values are Conservative values. The freedom of speech, a less imposing state, and acknowledge that dollars spent by those who have earned them are better spent than by the government that have taxed them. Those are Quebec values and Quebeckers can count on us to defend Quebec interests.

With the rise of the separatist Bloc Quebecois and our dominant results in Western Canada tonight, Canada is a country that is further divided. Big nation-building projects and major industries remain under attack, keeping thousands of Canadians out of work and holding back our nation’s potential. Our country is mired in deficits and sinking further into debt, threatening public services and even higher taxes. Canadians are falling further and further behind, with household budgets stretched farther than ever before. And as economic headwinds are gathering against us, we’re vulnerable as a country as we have ever been to the next inevitable downturn. But although the challenges we face are indeed big, I remain hopeful. Because Canada was built on Conservative values, ladies and gentlemen, and Conservative values will be what get us back on track.

A belief in people, not government. A firm commitment to the freedoms we hold dear, the freedoms of speech, of thought, of religion and of conscience. And belief that free markets, balanced budgets and small governments are the best ways to create prosperity and lift people out of poverty.

In a country where hard work is rewarded, not punished, and where the government realizes that the best way to help Canadians get ahead is to lift people up, not tear people down. I want to close tonight with the words of John Diefenbaker who said this: I am a Canadian, free to speak without fear, free to worship in my own way, free to stand for what I think right, and free to oppose what I believe wrong. Free to choose those who shall govern my country. This heritage of freedom I pledge to uphold for myself and all mankind.

And as we look ahead to the challenges we will face in the next few years, we must take these timeless words to heart. Because Canada is not defined by any political party or movement. Canada endures not because of any one government or leader, but because the values Diefenbaker so perfectly articulated transcend us all. It is because we are free—free to worship, free to speak, and free to believe. It is because we are equal in opportunity and before the law. And it is because we are strong, strong in character and in principle and in action. It is because we are all these things that Canada shines for everyone. And Conservatives must always uphold these values, no matter what may come. Because if we should suffer them to falter, so too would Canada itself. Ladies and gentlemen, our story is just beginning. Let’s remember this feeling: coming close, but falling just short. And let’s use it as fuel to redouble our efforts because our work is not over. Canadians are counting on us.

And when the time comes. And who knows when that will be? Canadians will need us to replace the Trudeau Liberals with a Conservative government that unites the country, celebrates our freedoms, honour its commitments and serves to help every Canadian get ahead. Thank you so much for all the support you’ve given me. Thank you so much for all your hard work. From the bottom of my heart. Thank you for your commitment to this party and the ideals that we stand for. Merci beaucoup.