What did Green Party leader Elizabeth May say after the election on Oct. 21? Find out here. 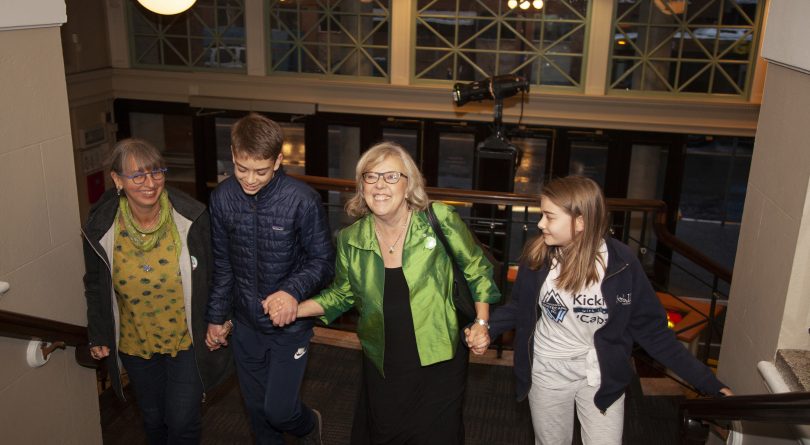 May enters Crystal Garden with family. (Photograph by Jen Osborne)

Thank you, merci. It’s been a while since we stood on this ground to recognize the broad traditional unceded territory of the Esquimault, Songhees, and W̱SÁNEĆ  Coast Salish peoples, and again I raise my hands to the traditional peoples of this territory, thank you, Hy’chka, Hy’chka Siam.

The good news is, Andrew Scheer owes me $50. We made a small wager at the end of the English language debate, in which I suggested that he wasn’t going to be prime minister. That turned out to be prescient.

But congratulations to the leaders of the other parties on their results. Prime Minister Justin Trudeau remains Prime Minister Justin Trudeau. Mr. Scheer remains the leader of the official opposition. The New Democrats lost a lot of seats, but they’re now the fourth party. The big winner tonight, well, was really the Greens and the Bloc Quebecois. We have more than doubled our popular vote and we tripled our seat count.

We for the first time have elected in a general election three members of Parliament. From Fredericton, New Brunswick, Jenica Atwin, and Nanaimo-Ladysmith, Paul Manly regained his seat.

I am so proud of our team, from coast to coast to coast. To all of our team in Quebec, I want to give you a big thanks. To Pierre Nantel, to Daniel Green, to Aline Bégin, and all the candidates and all the team that worked so hard. And it’s only a basis or foundation for the next time.

We know that we had great candidates. We’ve never had as many finishes in close seconds and in 10 per cents. But this is in reality to say, well, having achieved so much, three times more seats than in 2015, why do I stand here?

I stood on a stage in Victoria September 11th, and I saw the school climate strikers in front of me. I saw Emma Jane and I saw Rebecca and I said, “Jump up on stage with me.” So if you see some some teary faces up here—this was a children’s crusade. And I vowed not to let them down because what they just said to me was they feel as though, “What happened? Doesn’t Canada care about our future?”

And what I want them to know, and what I want all Canadians to know, is that I think and I know in my heart that all Canadians do care about the future. They care about the climate crisis. And to those leaders who told them, and I’m speaking, of course, to Prime Minister Trudeau and to Mr. Singh, who said they had a plan for a climate that would protect our children’s future, while not having—we go to Parliament determined to ensure that you actually have one while we still have the chance before the window on 1.5 degrees Celsius global average temperature increase closes for good. We will not allow the Parliament of Canada, in its 43rd session, to let down our children. We must act!

The fight continues! We’re not disappointed, it is only an obstacle. Now that we have a minority Parliament, it is such a better situation than a majority Parliament.

I want to thank the candidates here from South Island, South Vancouver Island, who we believed had essentially won the campaign at many points through this election campaign. I won’t dredge up what we experienced here. I just want to say that I am so extraordinarily proud to have campaigned with all the candidates across this country for the Green Party of Canada.

I send out my love and thanks to my husband, John Kidder, who did not win in Mission-Matsqui-Fraser Canyon, but did better than any Green has ever done before. And to all his volunteers and I particularly—she’s not with us here tonight—but I couldn’t be prouder than to have had Lydia Hwitsum campaign with us as the Green Party candidate in Cowichan-Malahat-Langford, doing a spectacular job as a Green candidate there.

And here, in the ridings closest to mine, and of course a huge shout-out to Jenica Atwin and Paul Manley, who are celebrating as well. (Don’t celebrate too long. We have to get to work soon.) But I do want to say that I do stand before you heartbroken because Racelle Kooy is a spectacular Indigenous woman whose voice I wanted to hear in Parliament.

And David Merner, David Merner, our candidate in Esquimault-Saanich-Sooke, kind of a down-to-the-wire finish, but we’ll run again.

So for the record books, this is the best election result that any Green Party in any first past-the-post system has ever had. This is the best result ever. And we enter Parliament as the first caucus in the history of our Parliament that is two-thirds women. Just saying.

To each who worked as volunteers, I want to say thank you. I can’t thank you enough. I literally can’t. But I will keep trying. Your dedication, your love, your care, your concern, your shoe leather. You knocking on doors and talking to everyone—we have raised awareness. We have raised consciousness. We have raised our vote.

But the goal here has always been to deliver the kind of government Canadians deserve. Let’s hope that as all the other parties—well, except the Bloc, which congratulations, to Mr. Blanchet, who did a great campaign and has won a great increase in support for the Bloc Quebecois, so the Liberals are lower, Conservatives without a win, a big win for the Bloc, the NDP losing almost all their seats in Quebec and across Canada, they lost their seats. The NDP now remains a fourth party in the Commons and we stay the fifth. It’s not the worst thing in the world.

We’re in that Parliament. It’s a minority Parliament. We’re going to make it by dint of hard work, moral suasion and non-stop arm-twisting. And I guess the phrase really is holding the feet to the fire. There will be crispy toes.

Thank you all, I want to pass the podium now.