What did New Democrat Party leader Jagmeet Singh say after the election on Oct. 21? Find out here. 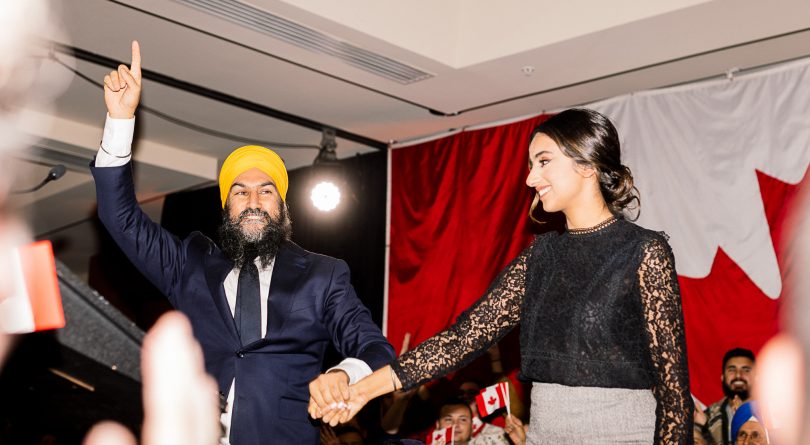 Thank you very much, my friends, thank you so much. Ah man, the love, the love is real. I appreciate the love. Thank you all very much for being here, for your involvement, it’s a real honour to be here with you. Thank you for all that you did.

My friends, before I go any further, I want to acknowledge the traditional territories that we are gathered upon. The unceded Coast Salish territories of the Squamish, the Tsleil-Wauthuth, the Musqueam, the Kwikwetlem, the First Nations.

And I spoke with Mr. Trudeau, the Prime Minister, earlier tonight. And I let him know that we’ll be working hard on making sure we deliver the priorities that Canadians have, that all of you have. We’re going to make sure that the energy that we built over this campaign, the excitement that we built, and the focus that we put on people, on people’s struggles, continues, and so that we can play a constructive and positive role in the new Parliament the Canadians have chosen.

I also want to congratulate the other leaders, the parties, Mr. Scheer, Ms. May, and Mr. Blanchet. I want to congratulate anyone, anyone who allowed their name to stand for any party, it’s a tough thing to do, and I want to thank you all. I’m going to tell you that I’m really proud to have been able to lead a team that is the most diverse, that represented women, that represented LGBTQ.

This team, this team was one of those caring, the most diverse team that we’ve been able to run, and I am so honoured to be to lead that team.

And I want to thank I want to thank the tens of thousands of volunteers that came out to support our campaigns and our teams across this country. There are far too many people for me to name, I’m sure you can imagine that. But I’m going to name just a couple. First off, someone who has been beside me, by my side throughout this journey, throughout this adventure. My wife, my life partner, Gurkiran. She stole the show once already, I would love for her to steal the show again.

I also want to thank my family, my brother, my my mom and dad, my sister, everyone who’s been such a big support to me throughout my life, my friends and my team in Ottawa, my team here. You see my team across the country. Thank you so much.

Now, again, there’s far too many people for me to name, but if I can just thank two people that  can represent the entire team that I have, it’s hard to do that, but there’s two people I think who wouldn’t mind if I recognize. They don’t know I’m doing this, but I want to recognize two people, in fact two incredible women that were integral to this campaign. And I’m proud to say they’re women. That’s something that’s really powerful in our in our party. My campaign director, Jennifer Howard. And my national director, Melissa Bruno. That’s two of the most powerful positions in our party. We’re young. We’re not young. Well, kind of youngish. Young powerful women, let’s just say they’re powerful women. (Either Melissa or Jennifer are going to be mad at me. Both.).

I also want to thank the incredible people of Burnaby South for re-electing me. I’m humbled. I’m humbled that you put your trust in me. Thank you. And I’m going to continue to work incredibly hard for you, to work with you, to work for you, thank you.

I also want to talk about Grassy Narrows. A community that represents the injustice historically and ongoing that Indigenous people continue to face. The people of Grassy Narrows who are so resilient in the face of neglect and negligence, from being ignored, being told they don’t matter, being ridiculed. We brought the national campaign to Grassy Narrows to let them know that they do matter. And that Indigenous reconciliation is sometimes as simple as basic respect and dignity. For the first people of this land and that means clean drinking water. That means not taking Indigenous kids to court. That means equal funding for child welfare, for education and quality homes

(In French) Friends, I met young people from all backgrounds, people who you have had trouble, and they were cynical about the politicians. They weren’t convinced; they said, “They’re all the same.” So to the people of Quebec, I want to say, thank you. Of course, the results are not what we wanted. But the welcome I received in Quebec, it warmed my heart. This first year electoral rendezvous allowed us to connect and I was able to show you that we share the same values and I am grateful for the support that we received this evening. But it wasn’t enough. We will continue to fight for you.

Jack began the work and we will continue it. Because progressives are us; we are the progressives. Thanks you friends, and see you soon. Keep up the work.

Friends, throughout this campaign I’ve heard a lot of stories about Canadians from Canadians who are struggling, and just want to build a good life, but are finding it harder and harder to do so. And to those Canadians, I want to say to you this tonight: New Democrats are going to Ottawa to fight for you. And friends, in the days ahead, I’ll be meeting my new caucus and we’re going to sit together and talk and discuss about how we can deliver for the people of this country.

(in French) Canadians sent a clear message tonight—they want a government that works for them. Not for the rich and the big multinationals but for Canadians.  And if all the members of Parliament elected tonight hear that message and act as they should, the real winners of this election will be the people.

So I want to let you know, New Democrats are going to work hard to deliver the following results. We’re gonna work hard to make sure young people have a future that’s filled with hope. That’s right. We want young people to be filled with hope. We want to make sure that Canada is a leader in the global fight against a climate crisis. And we want families to have a more affordable life.

And we want a Canada that is a nation that takes reconciliation seriously. And you know this, with New Democrats, for us, reconciliation is more than just a word. It requires real action, real action. So here’s what New Democrats are going to seek to do when we work with other parties to achieve, these are our commitments. These are the things that we want to continue to fight for. If you need medication in our country, we want to make sure you use your health card, not your credit card. That means a national publicly delivered single payer pharmacare for all.

We want to help Canadians be able to get a home that they can afford. And what we mean by making life more affordable is not a tax cut for the richest Canadians, but tackling student debt by waiving all interest on student loans. That means taking on the big telecom companies and putting a cap on cellphone bills.

And we even have an opportunity to even change the way we do politics in this country. I want to talk to the many Canadians that rejected the call to vote out of fear and thank them for voting for hope. And if any election showed the importance of this issue, this election showed it. With electoral reform, we can make sure that every election from now on is one where people don’t have to vote against something, they can vote for something.

While people might talk about the divisions in this country, what I’ve seen is that across this country, we share so much in common, we share so many values, we want to take care of one another—that’s what it means to be Canadian. So to everyone that I’ve met, everyone that’s welcomed me and my team into your community and your home, I want to give you a big hug and say thank you.

So tomorrow morning, we’re going to get down to work. I can’t wait to speak to some of our incredible new MPs, our job is clear: New Democrats have been given a critical role. You’ve given us a job to go to Ottawa and make sure that Ottawa does not continue to serve the interests of those wealthiest corporations at the very top, but make sure we serve the people, Canadians. We’re never going to forget your voices, we’re never going to forget your voices. We’re going to work for you. We’re going to work hard to get good things.