Trudeau needs an Alberta unity strategy if he wins

And yes, it will have to include a pipeline 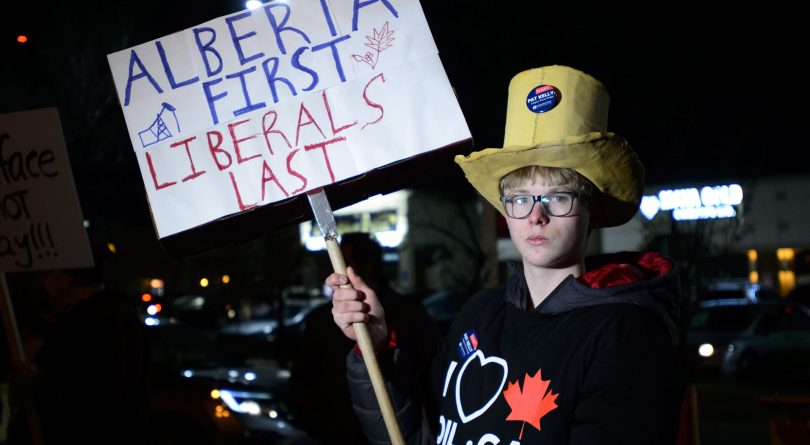 By tacking an 11:30 p.m. Mountain time (1:30 a.m. Eastern) rally in Calgary onto a campaign day that began more than 16 hours earlier in Ontario and would end in a Vancouver hotel, Liberal leader Justin Trudeau ensured his voice would be even more comically hoarse on the final day, his travelling campaign team (and media corps) extra depleted for the final push.

The less probable reason for his pit stop at an airport-area banquet hall is that Liberals believe a final boost are all volunteers need to secure victory in one or two of the Calgary seats the party is defending, provincial polls and seat projection models be damned. More likely: Trudeau merely wanted to signal yet again to distrusting Albertans he hasn’t stopped caring about them.

As midnight neared, Trudeau and the local candidate who introduced him both stressed how many times he’d visited as leader, and popped into Calgary in the final weekend of 2015’s campaign, too. “It’s because the city of Calgary matters to the Liberal Party of Canada! The province of Alberta matters to the Liberal Party of Canada,” Calgary—Skyview hopeful Nirmala Naidoo told the crowd of about 800—not a bad number for Liberal Calgary late on a Saturday night.

But it’s the sign of an unhealthy relationship that Liberals keep having to say this every time Trudeau visits the province, like a distant father reminding his kids he’s at the park with him while he’s at the park with them.
If the election returns Trudeau as Prime Minister—in a majority or (especially) a minority—he’ll need to do much more to soothe the resentment and fear gripping the oil-producing province. He’ll need a full-on Alberta unity strategy.

Some of the pre-election Alberta separatist rhetoric smacks of election scaremongering, and there’s no serious movement gathering at this point. (“Wexit” seems as comically lame as its title sounds.) But there are many out there howling and anxious about the growing climate movement, its many advocates’ disdain for the energy sector that fuels Canada’s most prosperous region—and the fact that this campaign has focused so much on one side of that economy-and-environment balance Trudeau has long been fond of mentioning.

Twenty-three per cent of Albertans are currently willing to vote to leave Canada, and a further 17 per cent are undecided, according to a survey earlier this month by Calgary-based ThinkHQ. Safe to guess that a large proportion of those undecided go over to Alberta’s “Oui” bloc if Trudeau stays in 24 Sussex after Monday. This comes with Quebec’s sovereignty movement still on the back burner despite a resurgent Bloc Québecois (whose leader will only talk about the S-word when asked, and then only in gauzy one-day-maybe terms).

Expect more energy executives to speak openly about Alberta going it alone, confident the province’s wealth is better hoarded within its boundaries than shared with Canada. Before the vote, the CEO of the $1.5-billion Calgary firm Whitecap Resources urged workers to share a letter arguing that a separatist movement becomes real the day after a Liberal win. “More will want to leave if we continue to be exploited for our revenue and vilified for our industry,” says the letter, published by left-leaning website Press Progress.

Will a legitimate Parti-Quebecois-style movement spring up, somehow figuring out an Alberta military or how becoming a landlocked nation would solves its pipeline woes? No. But the murmurs and shouts will be the pointy end of a wider sense of anger, victimhood and existential angst—western alienation at an extent not seen since the 1980s—that Justin Trudeau and the Liberals will have to figure out how to address.

Additional visits won’t be enough; certainly not if they’re like this one. Trudeau offered little more to Calgarians than his typical stump script, a pitch to progressive voters that mentions climate change but not his government’s Trans Mountain pipeline purchase, and some brief words about Alberta’s economic slump and Liberals’ corresponding tweaks to Employment Insurance. He’ll need to start wielding mantras like the trite “a strong Canada needs a strong Alberta”— which holds true, economically and historically—but say it not just in periodic visits here.

Because Albertans have learned to be really good at listening to what he says when he’s not in the province. Like in the French debate, when Trudeau spoke ominously of the oil interests (pétroliers) that support conservative premiers. Or like his Québec star candidate and environmentalist Steven Guilbeault contradicting the party line by saying future pipelines are unlikely thanks to the recent legislation Jason Kenney and oil leaders nicknamed the “no pipelines bill.” It was nearly three years ago when Trudeau told an Ontario town hall that Canada must “phase out” the oil sands (he said he misspoke), but Alberta politicians and industry advocates talk about it as though he said it just yesterday and five times again today.

The Liberals’ sharper anti-oil campaign rhetoric to win votes among progressives Québecers has planted seeds for many deep-rooted, bitter memories in Alberta, where you still hear spiteful commentary about Pierre Trudeau’s 1980s policies that hurt the oil sector. It makes it harder to imagine how Justin Trudeau, should he win, goes about mending fences with the province. Trying to do it in a minority scenario, while constantly seeking support from the more climate-minded NDP or Greens, seems even more daunting. And that nightmare scenario puts many Albertans in the odd situation of whispering prayers for a Liberal majority if Scheer doesn’t win.

There is , however, a red line with Alberta that Trudeau should not dare cross, lest things unravel distressingly fast. The Liberals cannot backtrack on the Trans Mountain pipeline. When the Trudeau government spent $4.5 billion to purchase it, when its U.S. owner grew weary of the project’s political risk and uncertainty, it did so knowing that the collapse of another oil pipeline project would trigger further decline in Alberta and drag down the nation’s economy.

Doing so now—which the Greens have demanded as part of propping up a government, while NDP leader Jagmeet Singh has been vague on whether that’s a bargaining chip for him–would send shockwaves through the energy sector and make Albertans feel more abandoned than they already do.

A new bitumen pipeline without doubt complicates Canada’s efforts to meet its global climate commitments, but cancelling it would worsen problems for Trudeau and Canada on a whole other level.