Trudeau says Canadians are "angry" at the unvaccinated 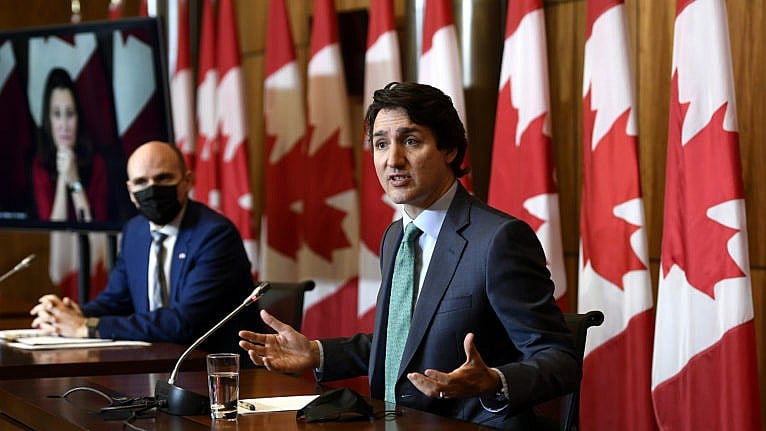 “When kids don’t go to school, they don’t sleep,” writes Shannon Proudfoot of Maclean’s in an eloquent and heartfelt lament for lost school days. “They have too much energy that hasn’t been used, and a deep, under-the-surface sort of surly sadness that comes of being isolated.”

A somewhat chewed up Proudfoot, who makes a good argument that the powers that be are too quick to cancel school, takes us through a day of the ridiculous reality of “virtual learning.”

Wynne speaks: Kathleen Wynne sat down with Paul Wells, of Maclean’s, for a long, revealing interview, discussing her struggles in politics. She is frank about what she sees as mistakes, and philosophical on the subject of her loss to Doug Ford, who she spoke up for after he encouraged people to enjoy their March break as the pandemic was gathering force. She observes that COVID has been good for Ford.

Ford was — and I want you to take this in the right way — COVID has been very good for Premier Ford. Because before COVID, he really had no agenda. He didn’t know what he was doing. That’s my opinion, having watched him in the legislature and having watched his policy. He came in to tear down what we had put in place, and he did that for the first couple of years. And then before COVID hit, there were real conversations among those of us on the other side of the aisle: ‘What are they going to do now? We don’t know what they believe in. We don’t know what they want to do.’ So what COVID did was it focused him. You know, it gave him a reason to stand in front of the people of Ontario.

Angry at unvaxxed: Justin Trudeau said Wednesday Canadians are “angry” with the unvaccinated, CTV reports:  “People are seeing cancer treatments and elective surgeries put off because beds are filled with people who chose not to get vaccinated; they’re frustrated. When people see that we’re in lockdowns, or serious public health restrictions right now because [of] the risk posed to all of us by unvaccinated people, people get angry.”

A slap in the face: Trudeau took aim at the Quebec reality TV stars and influencers who partied on a charter flight to Cancun, Global reports: “It’s a slap in the face to see people putting themselves, putting their fellow citizens, putting airline workers at risk by being completely irresponsible.”

The saga of the misbehaving influencers landed with force in Quebec, where the government has imposed a curfew and other restrictions that have the public in no mood for airborne shenanigans. Hugo Dumont, in La Presse, has a breezy column on the sorry story (translation). Le Journal de Montréal has the lowdown about a would-be pilot captured on video vaping.

Blameless PM: CTV’s Don Martin writes that in his presser Wednesday, Trudeau took pains to blame the premiers for Omicron woes, without acknowledging the funding gap that has the provinces struggling.

That’s why today’s announcement of rapid tests by the millions shouldn’t let the feds deflect all the blame in coping with COVID. They remain the shortchanging partner in funding a health care system with a comparatively low number of intensive care beds compared to other G7 countries.

In the Globe, Campbell Clark writes that the Prime Minister’s pandemic pep talks are wearing thin.

That warning has been heard so regularly in this pandemic that it will serve as a reminder that Canadian primary health systems, in jurisdictions from coast to coast, are stretched too thin. That’s inevitably the case now, when the Omicron variant has spiked cases and kept infected hospital staff from working, but it’s also clear the system was strained before the pandemic and didn’t have excess capacity for critical care. Provincial premiers, who are responsible for health care, will find voters will expect them to do something about that for the future. And Mr. Trudeau, who just ran an election campaign full or proposals for health care services that aren’t in his jurisdiction, can’t expect to escape those pressures, either.

American danger: In the Globe, Andrew Coyne makes a convincing argument that American democracy is under serious threat from an unhinged GOP base, and warns that this will be an existential challenge for Canada.

If we can no longer count on sharing a border with a stable, democratic, and peaceful partner, then all of the other assumptions on which the Canadian nation-state is based are in doubt.

Failed escape attempt: Vice has an in-depth report on what appears to have been an incompetent border-crossing attempt by far-right hater Kevin J. Johnston, who apparently had to be rescued by the border guards he meant to avoid.

— Stephen Maher
Thanks for reading this sneak peek of the Maclean’s Politics Insider newsletter. Sign up to get it delivered straight to your inbox in the morning.
FILED UNDER: Editor's Picks education Justin Trudeau Kathleen Wynne ontario parenting Politics Insider