Trudeau's post-debate handshake with Scheer tells its own story

Election Image of the Day: An obligatory moment of truce at the end of the night appears civil, yet freighted with tension 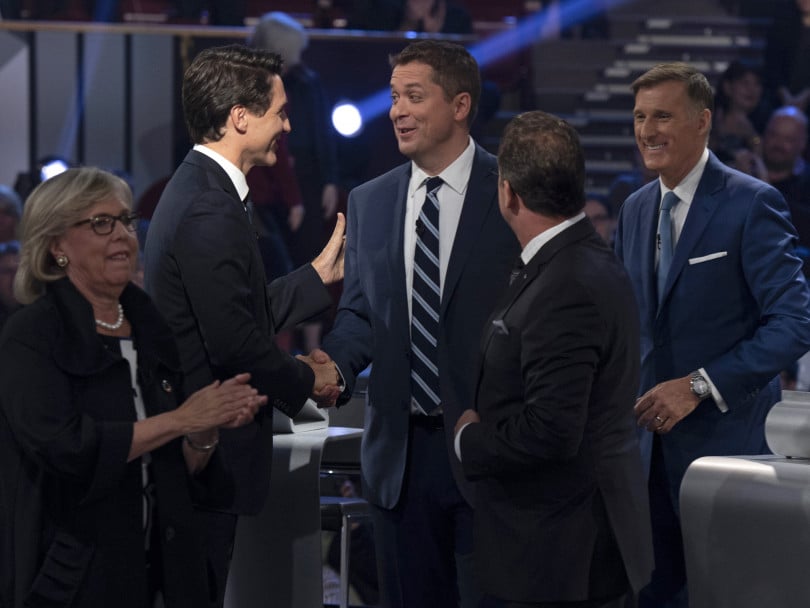 Canadians pride themselves on civility, especially when it comes to our political discourse. So it’s not so surprising to see rivals Justin Trudeau and Andrew Scheer, flanked by a smiling Maxime Bernier and clapping Elizabeth May, shaking hands while wearing heavily glued-on grins after the only English-language debate of this campaign to feature all major leaders. The subject of their conversation—like the moment Scheer realized being an American was a bad thing and the exact number of times Trudeau has worn blackface—will remain one of the mysteries of this campaign. But you don’t need to be a psychologist to detect the tension. Scheer’s expression seems to be taunting the Liberal leader (“Oh ho, I really got you there when I said you should run for the Liberal leader of Ontario!”), while Trudeau is perhaps thinking, “Maybe if I shake your hand the way I shook Donald Trump’s, people will conflate you two?” The only other visible face belongs to Bernier, who, let’s be honest, just looks happy to be there. Canadians may not have learned much about the depth of any party’s platform, but if nothing else, the night was a good bit of political fun for those who care about such things. All within the realm of civility, of course.