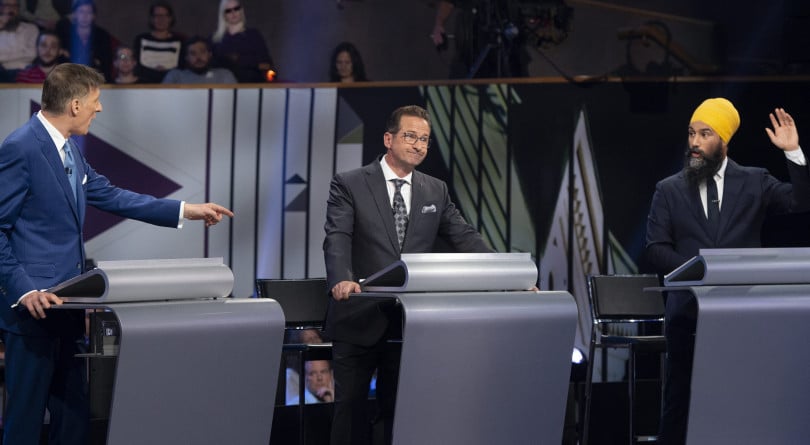 Jagmeet Singh felt that it was so plain where he stood on the ban on turban- or hijab-wearers in Québec’s public-service, he used “obvious” twice in a span of seven words. “It’s probably pretty obvious to folks that I am obviously against Bill 21.” He laid out his personal hurt, his sadness, his channeled frustrations that a Muslim in hijab cannot teach, or a Jew in yarmulke can’t be a judge.

Which is why, Singh eventually declared, he will … address affordability by taking on powerful corporations. This was, it bears mentioning, in response to debate co-moderator Althia Raj’s question on why he lacked courage to act in any way against the religious symbol law that so saddened him.

It’s not quite accurate to call the section on Bill 21 the most passionate part of the debate, but it was the segment with the most protestations of passion. The vigorously shaking heads of the leaders said no to the law. The lips curled into disapproving frowns. But the eyes of the leaders—unwilling, worried or merely politically calculating—told a different story: they were cast downward, in resignation.

WATCH: A replay of the full English-language leaders debate

For those who think climate change is this election’s great intractable issue, the broadcast consortium presented you Monday with the leaders’ filibusters on Bill 21. Andrew Scheer spent many of his ticking-down seconds praising Jagmeet Singh’s poise in the wake of the Justin Trudeau brownface revelation, before reassuring Quebec voters who like Bill 21 that he won’t intervene—and, while Scheer knows nobody was seriously worried about this, Canadians can rest assured that a Conservative government won’t pass a federal version of the law. (He did not assure us that the Québec’s French-only legislation will sweep the nation either, so now maybe we should wonder.)

Green Leader Elizabeth May latched on to Scheer’s great time-eater by praising Singh herself, with an odd little riff on white privilege, then added she doesn’t want Ottawa to step  into the debate Québecers are having.

Singh used his rebuttals to talk about “polarization”—not a segue to Bill 21, somehow! Instead, that became a way for him to key on his canned lines about housing costs and corporations.

Bloc Québecois Leader Yves-François Blanchet channeled the absent Premier François Legault and mentioned the don’t tread-on-us popularity of Bill 21 in the province—65 to 70 per cent, and nearly half the population “strongly” backs it.

Trudeau, the only person on stage who seemed to want to handle a Bill 21 question, carved into Singh for sounding like all the leaders onstage who haven’t lived a full life with racial discrimination.

RELATED: The world is broken—and human kindness is the only solution

“It’s a question of yes, it’s awkward politically, because as Mr. Blanchet says it is very popular,” the Liberal leader began. “But I am the only one on the stage who has said yes,” he paused on yes, to build up his grand crescendo… “a federal government might have to intervene on this.” Might? That’s his big zinger to defend minority and women’s rights?

Trudeau loaded up again for what seemed like another attempted sock-o against the NDP leader: “So why not act on your convictions and leave the door open to challenging it.” One of those old-timey revolvers in cartoons that actually produced a daffodil, not anything harmful.

The Liberals triumphed in Québec last time as the one party taking a firm stand against a Harper measure on niqabs, when others were squishier in deference to sentiment among Québec voters and caucus members. The field is so much more mealy-mouthed on Canada’s most racist legislation in recent memory that even by standing for not much, Trudeau stands clearly on his own on this one—for non-Quebecers and the minority of people within the province who despise the law.

Trudeau managed to get out his mini-jab about Singh’s convictions while the two were cross-talking, and as the Liberal leader’s words ended, the NDPer finished his own point. To be sure, his final phrase wasn’t directed at Trudeau. Yet it seemed, in a strange way, to be Singh’s way of admitting that he has put political triangulation ahead of principle: “I want to be your prime minister.”