Trump vs. Biden 2 or maybe 3: Laptop from hell 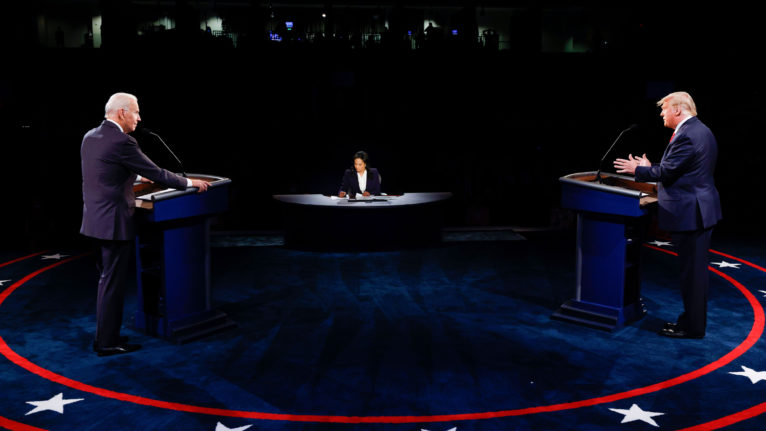 Trump and Biden participate in the final presidential debate at Belmont University in Nashville, Tenn., on Oct. 22, 2020 (Jim Bourg/AFP/Getty Images)

If we’re all very lucky, that will turn out to have been Donald Trump’s last presidential debate. I can’t guarantee it, I suppose, and come to think of it I’m starting to worry that I’ve jinxed the damned thing, but in theory it’s all over.

U.S. presidents are term-limited, so even if he won re-election on Nov. 3, Trump would be prohibited from running again and thus spared, in 2024, the assorted agonies of these things: being judged by a snooty debate moderator, standing upright for 90 continuous minutes, coming up with at least one bad thing to say about racists. And if he loses, he gets to go home to Trump Tower and his beloved Twitter account and taco bowls. Either way, no more debates.

Mind you, it’s possible Trump loses next month and then runs again in four years at 78, the same age Joe Biden will be when he’s sworn in. Thanks, Joe. And I suppose we can’t rule out the possibility that Trump holds power next month by hook or by crook and that, therefore, by 2024, the 22nd Amendment governing term limits, and the rest of the Constitution with it, will have melted away to wood pulp. So, you know, never say never.

But if that was the Trump’s last turn at bat, at least he went out on a relative high note. It turns out technology can solve all kinds of problems, and that microphones have off switches, a discovery that has a calming effect on political debate. I sure envied NBC anchor Kristen Welker’s ability to deprive Trump periodically of his ability to interrupt, and Joe Biden too, though in fact neither was kept from interrupting the other during long sections of open debate. The net effect was that this was closer to being a debate than any encounter the two men have had, with the possible exception of their excellent exchange across two broadcast networks and thousands of kilometres of physical distance during last week’s Night of the Duelling Town Halls.

What do you hear when these two candidates mostly have a clear call on your attention? In large part you hear Trump not being truthful and Biden not being specific. The COVID-19 catastrophe is “turning a corner,” the president said. In fact, the seven-day average rate of new infections is higher than at any point since the beginning of August. Outbreaks in Texas and California and Florida have “gone away,” he said. In fact, infections in all three states are moving back up after recent declines.

But I’ve got real questions about anyone’s ability to get this pandemic under control in the U.S., where by January tens of thousands more Americans will be dead, everybody will be exhausted, and the slow grind of economic devastation will have continued for nearly three more months past voting day. Biden’s response was to wave his mask around. Sure, but lots of Americans already wear masks and those that don’t will be entirely uninterested in taking advice from Joe Biden.

Biden’s simply not a great debater. Let me tell you a secret about political debates: they’re a useful but very limited test of ability or virtue, and even though Biden crushed his competition in the Democratic primaries, it wasn’t on debate performance. I spent most of the night wishing Biden could tap out and let Kamala Harris into the ring, where she would have remembered details and noticed weaknesses that eluded the nominee. Trump went on at length about the supposed economic benefits of his China tariffs, which he still seems to think China pays. Harris would have noticed, and made Trump pay for his feeble understanding of his own policies. Biden didn’t.

Trump was surprisingly sanguine about being forced to listen to his opponent, but usually when he spoke there was no evidence he had heard much Biden had said. Instead he spun an extended fantasy description of himself: “There has been nobody tougher on China than Donald Trump,” and “I don’t make money from China—you do,” and “I am the least racist person in this room.”

Trump’s hope was to import into this debate a story the New York Post published, after considerable internal dispute, about Biden’s son and a laptop computer full of incriminating emails that Rudy Giuliani had been shopping around. “It’s a laptop from hell,” Trump said. He might have increased the number of viewers who’d even heard about this story, but probably the main effect of his interjections was to force Biden to rebut, which Biden did clumsily. Long minutes were lost to the Democrat by the back-and-forth.

It was a better debate than the first. It put slightly more emphasis than the first one did on Biden’s limitations as a debater, and slightly less emphasis on Trump’s radiant unfitness for high office. The question remains whether Americans will prefer a good-faith effort to put the country back together, or four more years of low farce. We’re about to find out.