U.S. Election 2020: Five takeaways as it all hangs in the balance

The Dems' dream of a landslide is dashed, and Americans had best buckle up for the turbulent days and weeks ahead 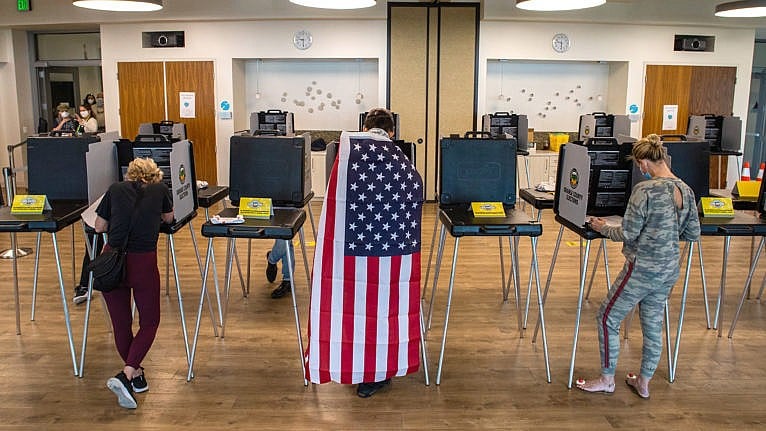 We hate to break it to you but we don’t know who won. Late into election night, it was unclear whether Donald Trump will be re-elected, or if Joe Biden will uproot him and become the next president of the United States.

Trump and Biden both have paths to victory, but a handful of key states—Minnesota, Wisconsin, Michigan, Pennsylvania, Ohio—were still too close to call late on Tuesday night. So we wait. We wait for the results, and we wait for the inevitable disputes and legal challenges thereafter. We try to ignore Twitter.

You may be flashing back to four years ago and you may not believe your eyes. We aren’t sure we do either, although you are reading our best attempt to decipher the flood of early results that flashed across our screens Tuesday. The nation’s eyes are strained. And we Canadians didn’t even have to vote.

If your tired eyes weren’t glued to network television on election night, here are a few things you missed, and a few key conclusions—at least the ones we’re prepared to make—about what it all means.

No landslide for Biden

What the early election results show is that the electoral map in 2020 looks pretty similar, in many ways, to the map in 2016. People are set in their partisan ways—despite Democrats’ best attempts to frame this election as a decision on the very soul of American democracy.

By early in the night, it was clear that there would be no resounding victory for Joe Biden, as some pundits predicted. Pollsters had noted that several southeastern states could portend a Biden victory if he flipped them—Georgia, North Carolina, Florida. He didn’t even come close.

If Biden did win, it would be because of small gains here and there. There were no big upsets; the only states that looked likely to flip, like Arizona, had been identified well in advance as major battlegrounds. Trump support remained strong, especially in rural areas—stronger, perhaps, than most of the commentariat expected.

It all sounds a little familiar. Pollsters tried to be cautious about their models this time around, after their failure to predict the 2016 result. Dare we suggest they take yet another look at their methodologies?

It’s not over by a long shot

We permit you a celebratory beverage of your choice, if the results so far encourage you—and a hearty drink if they don’t—but please take it all with a grain of salt. (Especially if you chose tequila.)

Even if the election looks to be leaning one way or the other by early Wednesday, a final call won’t come for a while. Nor should it. We won’t be in a position to know which way some key states—cough, cough, Pennsylvania—will swing until a few days after the election, because of when officials are expected to finish processing ballots.

And then, even if one candidate declares victory, the other won’t necessarily be in a position to concede until anticipated legal battles are settled.

Trump told several rally crowds in the lead-up to the election that if he doesn’t win, that’ll be because of a “rigged” election. You can bet that Democrats will be just as motivated to make sure no fraud is at play.  Republican and Democrat lawyers—along with civil rights organizations—are preparing for legal battles over recounts or contested results, especially where large portions of mail-in ballots were involved. Some estimates suggest these battles could drag into January.

Democracy is healthy… at least, based on this one metric?

If one thing’s for sure it’s that Americans wanted to make themselves heard this year, one way or the other. This election looks like it will be historic for voter turnout.

The proportion of eligible voters who showed up to the polls in 2016—about 59 per cent—was already higher than any other U.S. presidential election since the ‘60s. Any higher than 63 per cent turnout this time around and we’re looking at the best participation rate in a hundred years. Another potentially historic trend, per exit polls: the majority of white voters is getting smaller.

The pandemic made for a quieter election day in many parts of the country, but early voting more than made up for that. Upwards of 100 million early votes were cast in total, almost 74 per cent of total votes cast in 2016. Strikingly, before the polls opened on Tuesday, a third of Texas’s entire population of 29 million people was represented in a count of 9.6 million absentee or early ballots.

We can safely rename them the Divided States

We know this subheading isn’t very witty, but we are tired. On a positive note, election day itself does not appear to have featured the kind of widespread chaos or attempted voter suppression of pessimists’ wildest dreams. It may be too early to tell whether doomsayers are on to anything with predictions of civil war, but for now let us say those concerns feel overblown, too.

No matter which candidate wins, neither will have won by all that much. There is no sign that the United States’ increasingly-polarized political landscape will get any less so. Divisions will play out dramatically during the election fallout, with Trump expected to sow much uncertainty about the result. For people protesting systemic racism in the U.S. who’ve decried Trump’s veiled nods to white supremacist groups, such a close result will be worse than discouraging.

And in the immediate future, rifts will continue to play out as the country struggles to get its public health crisis under control. Compliance with health advice, especially mask-wearing, has become politicized. Already, more than 230,000 Americans have died during the pandemic. As the final results pour in, we hope our neighbours can muster the compassion and civility that will be required to weather the extended tragedy.

The U.S. electoral system is a mess

Did you think a list of “takeaways” would fail to mention how incredibly confusing American elections are? Especially in a close race?

It’s not that nobody has noticed how convoluted things are, or how difficult for average people to understand. It’s that the system is set up for inertia, not for nimble pivoting to more-coherent mail-in ballot rules. The fact the system is so weirdly inconsistent from state to state—when and how voters can register; when and how ballots can be received; when and how they are counted—prevents Trump’s predictions of widespread fraud from making much sense.

Then there is the broader, seemingly eternal debate over the existence of the electoral college, whose members represent states in actually electing the president. Most states operate on a winner-take-all basis but, again, not all of them.

Although America is likely to avoid the nightmare scenario of an electoral college tie, will this close shave with a disastrously unclear result finally convince states to opt out of the system? Don’t hold your breath. In 2016, if the U.S. elected presidents based on the popular vote, Trump would not have entered the oval office. Republicans will do everything they can to hang on.