Vaccine mandates are at the top of Trudeau's to-do list 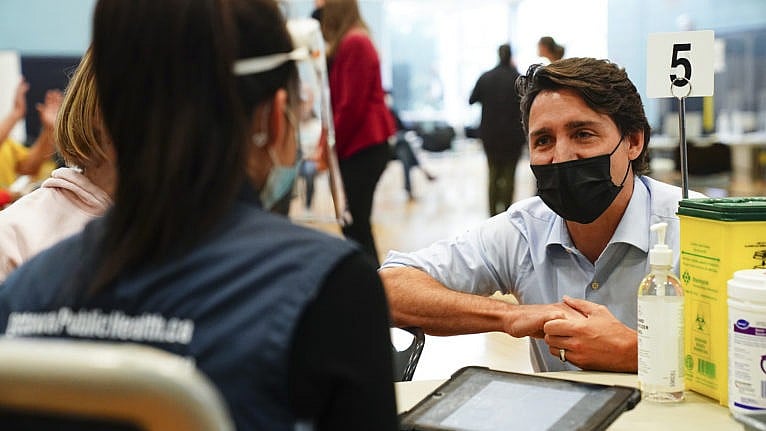 Justin Trudeau at a vaccine clinic in Ottawa on Sept. 28, 2021. (Sean Kilpatrick/Canadian Press)

Fighting the pandemic is the top priority for post-election Justin Trudeau, who held a news conference at a vaccination clinic outside Ottawa on Tuesday, CBC reports, with Chrystia Freeland at his side. He plans a vaccine mandate for federal public servants and travellers. Trudeau warned would-be travellers: “Make sure that you and all members of your family over 12 years old have gotten vaccinated and are getting your second shot if you haven’t already, because you will not be able to travel on a plane or a train in Canada if you are not fully vaccinated.”

Trudeau also said Freeland will continue as deputy prime minister and finance minister. His new cabinet will be sworn in in October and Parliament will return “before the end of fall.”

He hinted that he will soon announce that Huawei Technologies will not be part of Canada’s 5G wireless network, the Globe reports. Bloomberg has a good roundup on what it all might mean.

No firebreak: On Tuesday, Jason Kenney rejected a “firebreak” shutdown that doctors are calling for, CP reports, as Alberta copes with severe patient overcrowding and more than 20,000 active cases of COVID-19.

Kenney said new restrictions would be unfair to the vaccinated: “If we were to bring in widespread restrictions, [they] would most likely be complied with by people who are vaccinated, but we would likely see large scale non-compliance among the unvaccinated population. That wouldn’t necessarily get us much further ahead.”

Bans protests: Kenney didn’t introduce the public health measures that doctors are calling for, but he did ban demonstrations outside hospitals, CBC reports.

More sick people: CBC also reports that Alberta has one-tenth of Canada’s population but almost half of active COVID-19 cases.

More sick children: The Calgary Herald reports COVID cases among Alberta children have hit record highs as more schools face outbreaks. Provincial data shows Alberta children hit a seven-day average of 68 cases per 100,000 last week, the highest for those aged 5 to 11 years since the start of the pandemic.

Doctor disciplined: The College of Physicians and Surgeons of Ontario has barred a family doctor from providing exemptions for COVID-19 vaccines and face masks, called him “incompetent”  and accused him of “disgraceful, dishonourable” conduct, largely because of his social media statements, CBC reports.

Orphan left in camp: Global’s Stewart Bell has a disturbing story about an 18-month delay in retrieving a Canadian orphan from a Syrian refugee camp, based on access-to-info documents that show officials did not feel they could safely travel to the area, although officials from other countries were doing so.

While the U.S. and other countries were sending delegations to the region, Canadian officials wrote that they weren’t allowed to, citing “federal legislation and the Canadian Labour Code.” The documents show Canadian officials wanted “alternate solutions” for getting Amira that did not involve crossing into Syria, before finally sending a delegation to bring her out.

Kovrig jabbed: Michael Kovrig visited a Toronto pharmacy–to receive a COVID-19 vaccination and an ovation–and a barbershop for a long-overdue haircut. Tom Blackwell has a nice story on the outing in the Post.

No hostage exchange: The sooner Canada dispenses with tales of ‘prisoner swaps’ and ‘diplomatic triangulation,’ the sooner it can have an honest conversation about what this saga revealed, Terry Glavin writes in Maclean’s.

Glavin is not optimistic that the Trudeau government will chart an appropriate course in its dealings with Beijing.

What lessons have we learned? Will we even get around to officially placing Huawei outside the core of Canada’s 5G internet connectivity, following the lead of Canada’s democratic allies? Are we going to stick with Trudeau’s long-term strategy of deeper and more intimate cultural, economic and political ties with China? It’s early innings, but the plan seems to be just getting things back on track, back to “normal.”

Housing hot: CMHC has warned the country’s real estate market is overheated, overvalued and at risk of a downturn, the Globe reports.

Consequential election: Veteran columnist Susan Riley has an interesting take on the recent election in the Hill Times, suggesting it could lead to a “momentous” policy shift, “notwithstanding the absence of a radical shift in seats.” She says voters signed on to a progressive agenda in spite of Trudeau’s “robotic, unfocused and insincere-sounding pronouncements throughout the short campaign.”

Not angry: The Canadian Press has some highlights from an interesting Leger post-election survey, which finds that, whatever else we might think about the election, at least most Canadians aren’t angry about it.