Vic who? The Ontario PCs name an interim leader

Vic Fedeli has been quietly building a profile at Queen's Park since 2011. Is this the man who will take down Ontario's Liberal dynasty? 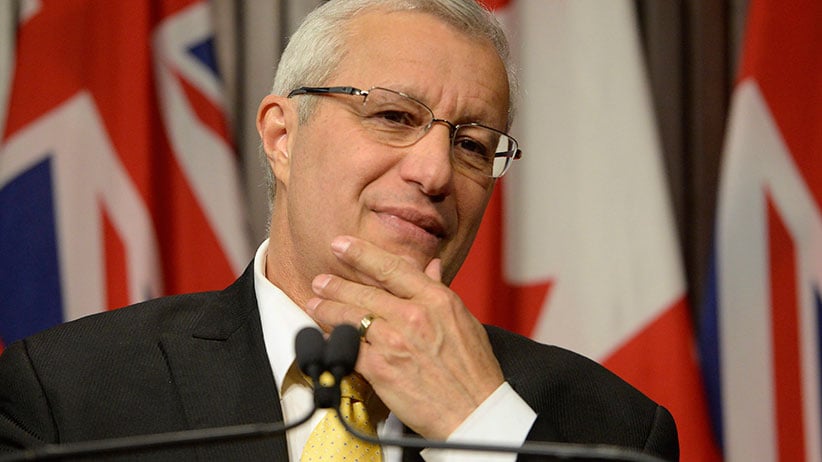 Ontario PC party interim leader Vic Fedeli speaks after he was named interim PC leader at a caucus meeting at Queen’s Park in Toronto on Friday, THE CANADIAN PRESS/Nathan Denette

Update: The Ontario PC party executive said Friday there will be a leadership race before a provincial election in June. Interim leader Vic Fedeli will be eligible to run. The party hopes to conclude the race by the end of March.

He may not be familiar to the general public, but he is to Queen’s Park, having served as an MPP since 2011 and filled the role of finance critic. That’s allowed Fedeli, 61, to start building a profile, sparring with the Liberals over hydro rates, government spending, provincial debt and the gas plant scandal. (Or as Fedeli calls it, the “Gasp Plant Scandal.”)

What did he do before politics?

Fedeli started an advertising firm in his 20s, and billed it as the first full-service agency north of Toronto. He sold the company in 1992 and spent the next decade or so in the non-profit world, including the founding of a local development agency. In 2003, Fedeli made his first foray into politics by running for mayor of North Bay, Ont. He was elected with a substantial majority and served two terms. Fedeli garnered attention in 2009 when he vocally advocated against the “Buy American” policy implemented by the U.S. government in the midst of the recession, even though the mayor had no real leverage.

What did he do as an MPP?

Fedeli was elected to represent Nipissing (the riding of former PC premier Mike Harris) in 2011, and was later appointed energy critic before moving to finance in 2014. As a former businessman, Fedeli relished the role, and published a regular series called “Fedeli Focus on Finance.” He also promoted the interests of Northern Ontario, including the development of the Ring of Fire mining region.

When he ran for party leader in 2015, Fedeli advocated for a big-tent approach to broaden the PCs’ appeal, promising to reach out to unions and other groups that traditionally have not aligned themselves with the party. He dropped out after five months, saying he hadn’t raised the cash or sold enough party memberships to carry on.

In a press conference Friday, Fedeli referred to himself as “party leader,” rather than “interim leader,” and called the distinction “semantics.” It’s actually quite important. It’s still unclear at this point whether the party will hold a formal leadership race before June—an exceedingly tight timeline—or have Fedeli stay on to challenge Liberal Premier Kathleen Wynne and NDP leader Andrea Howarth in a June election.

That’s up to the party’s executive. Internal unrest is already stirring. Some argue it would be undemocratic to deny the entire party a say on who will lead before a pivotal election. Rod Phillips, who’s considered a star candidate, argued as much in a recent statement. “The leader who takes us through the election must have a clear mandate from all members of the Ontario PC Party,” he said. “This isn’t without its challenges, given the timelines, but it is the right thing to do.”

Caroline Mulroney, another high-profile candidate, is sympathetic to this view. “I’ve been hearing from Party members across the province. There have been many things said, but one clear message: that all 200,000 members of our PC Party have the right to vote for the person who leads them into the next election,” Mulroney wrote on Twitter.

On Friday, 28 MPPs sent a letter to the executive arguing that “it is vital that membership have the final word when it comes to selecting the Ontario PC Party Leader that will lead us into the next election.”

Others fear a leadership race would disrupt the momentum the PCs already have. Before Brown stepped down, he had a substantial lead over Wynne in opinion polls. This is the approach Fedeli favours. “We are smack dab in the middle of the fight of our lives for our party,” he told Global News on Thursday. “There’s no time for a leadership race.”

What’s his position on pancakes?

Miss P made these beauties for the pancake toss at the Powassan Maple Syrup Festival. Don't think she'll miss a few! pic.twitter.com/K1xSNLnDsR